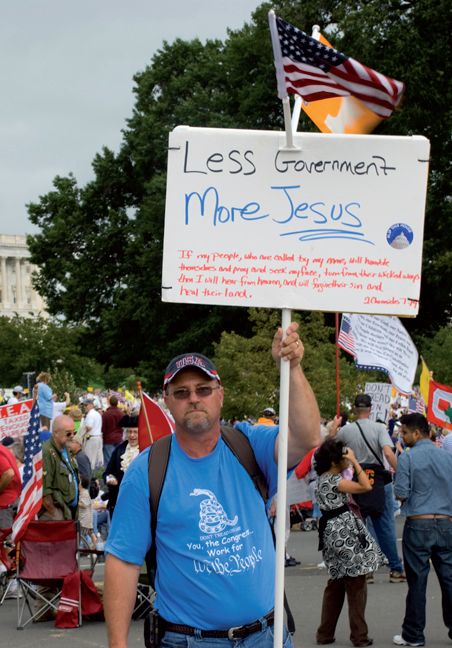 To keep the world ticking over, it seems, God occasionally needs a little help from believers with political clout.

Although, as we are told, God is all-powerful and all-knowing and should therefore be quite capable of identifying problems and sorting them out by himself, the US Presidential hopeful Rick Perry decided recently that a couple of things needed to be brought urgently to God’s attention, namely the state of the economy, and America’s declining moral standards.

The way to go about this is, apparently, a seven-hour, 30,000-strong rally of prayer and fasting. Those attending and praying for God’s intervention to halt America’s national decline included anti-gay and anti-abortion campaigners, Christian bikers and soccer moms (whatever they are).  Gay relationships and abortion are two issues which Perry is passionate about.  “There is hope for America,” he told them all. “It lies in heaven, and we will find it on our knees”.

His attempts to get God’s attention have not always been particularly successful. In April, he announced a three-day vigil of prayer to end the drought in Texas. But Texas is still suffering its worst drought since 1895. Perry, however, is undeterred. Demonstrating the kind of political oratory that made America what it is he went on, “The nation that forgets God is turned into hell”.

“Father,” he pleaded, “Our heart breaks for America. We see discord at home. We see fear in the marketplace. We see anger in the halls of Government, and as a nation we have forgotten who made us, who protects us, who blesses us, and for that we cry out for your forgiveness”.

How effective the praying will be in kick-starting the economy we don’t know, but as for the fasting part of the operation, well, the burger and other fast-food stands were said to have done a roaring trade. Fasting is obviously very hungry work.

Meanwhile in Somalia where the fasting is not just a voluntary stunt, Allah’s interests are being looked after by the Islamist al-Shabaab insurgent group which controls most of the southern part of the country.

As if poverty and famine were not enough for the people to cope with, al Shabaab have been carrying out amputations and stonings of alleged criminals, enforcing mosque attendance, denying that there is a famine and banning aid groups including the UN World Food Programme. Numerous humanitarian workers and local journalists have been killed.

According to the New York Times on 17 August, while this is going on tens of thousands of Somalis are dying and as much as half the food aid delivered is going missing. Al-Shabaab, though, are ensuring that the people’s morals are not corrupted by the West. They have banned the baking and eating of samosas, a local food item, because they are a Christian symbol.

Forget about religion being the heart of a heartless world. Life (and death) here must be sheer hell.