Material World: The Enclosure of the Sea

The Enclosure of the Sea 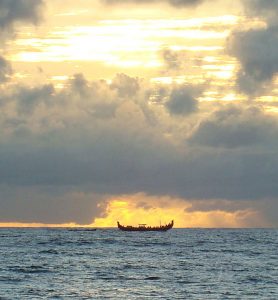 The oceans remain the last unexplored region of the Earth. But the recent advances in technology and knowledge are pushing back the boundaries so that humans via capitalism are now within sight of opening up yet another part of the planet to exploit. However, the availability of resources has given rise to new international quarrels about how to divide up the spoils of the seas. Disputes over territorial limits of national waters are now commonplace.

We are accustomed to the concept of land-grabbing by corporations but now it has expanded to capturing the possession of the assets of the ocean, stealing resources and denying local fishing communities access. A report has been published (bit.ly/2KanK2d) by the Transnational Institute (TNI) which is a research and advocacy organisation.

It defines ocean grabbing as a ‘major process of enclosure of the world’s oceans and fisheries resources, including marine, coastal and inland fisheries. Ocean grabbing is occurring mainly through policies, laws, and practices that are (re)defining and (re)allocating access, use and control of fisheries resources away from small-scale fisher-folk and their communities, and often with little concern for the adverse environmental consequences… Another important driver of ocean grabbing is the increasing demand and the increasing scarcity of resources and new technologies that enable the extraction of resources in formerly inaccessible areas…’

Global fish stocks that feed hundreds of millions of people are dwindling and it is explained by some that ‘Overfishing is… an example of the ‘tragedy of the commons’. Advocates of this theory assume that because there is no owner and so resources are freely accessible to all, it leads to abuse of those resources in the short-term disregarding the longer-term welfare. The ‘tragedy of the commons’ however takes place within the context of capitalism which is a system based on individual self-interest rather than to manage resources as the collective heritage of communities and this leaves the commons vulnerable to private interests. Thus, the TNI report explains it would be more correct to speak of the ‘tragedy of the private exploitation of the commons’ which undermines sustainable traditional management practices.

An earlier 2014 report by the TNI, on Ocean Grabbing (bit.ly/2NByzfR) shows how the rise of market-based fishing policies that favour large-scale aqua-industries is systematically dispossessing fishing communities of the means to livelihood. The report cites examples of luxury beach-resorts in Sri Lanka where fishers can no longer get to the coast, the destruction of mangrove areas in Ecuador to promote export-oriented shrimp aquaculture that has destroyed fishing habitats, and the dramatic rise of Rights Based Fishery (RBF) policies that have handed over large tracts of ocean to industrial fishing companies in Europe, Canada and elsewhere.

India’s coastline is more than 7,500 km long, and about 3.5 million people make a living from fishing and related activities. There are more than 3,000 fishing villages along the coast. Changes to India’s Coastal Regulation Zone rules in 2017 have lifted the ban on land reclamation for commercial purposes. Fishers say the changes will lead to environmental damage, displace coastal communities and hurt the livelihoods of millions who depend on the sea for their survival. ‘The coastal lands are ours by tradition. The state plans to take them away with this law,’ said Rajhans Tapke, ‘Our land will be lost, our access to the sea will be affected, our catch will be affected. How will we live? … We protect the sea, the coast, the marine life; now our lives, our livelihoods are threatened because they want to give our land to movie stars and wealthy people who want sea views and beach sports’ (bit.ly/2QbdJ8T).

Only when we reach a rational economic system where the wellbeing of all is the guiding principle and we are no longer subjected to the blind market forces of capitalism can the natural resources of the land and oceans be used to benefit all of humanity. Only socialism goes further than pious hopes and wishful thinking that our planet is not going to be abused in pursuit of profit.