Cash And The Castaways

One familiar trope of reality TV is to plonk its participants somewhere remote and see how long they can live off the land. Gluttons for punishment not well-exposed enough for I’m A Celebrity Get Me Out Of Here could sign up for the likes of Survivor or The Island With Bear Grylls. The latter has for its sixth series morphed into Treasure Island With Bear Grylls (Channel 4), with an added twist which interestingly highlights how money shapes our relationships and outlook.

Twelve volunteers are left on a smallish Pacific island with some fishing equipment, enough to eat and drink for just a few days and, of course, cameras. They have to make their own shelter, find food and a fresh water supply and learn to survive without things they usually take for granted, like supermarkets, electricity and bathrooms. One important feature of everyday life, though, has been (literally) thrown into the mix, as also dropped off on the island are parcels containing bundles of cash. £100,000 in total is chucked out of a helicopter, with the parcels and their parachutes usually ending up hanging from trees out of reach. The contestants have to find the parcels, and when they do, decide whether to share the money with the rest of the group or keep it for themselves.

Those taking part are largely a likeable bunch, with the enviable enthusiasm to take themselves out of their comfort zones and put themselves to the test. There’s a property manager who unfortunately learns the hard way why you shouldn’t drink seawater, a plumber who gets into the kill-your-own-dinner mindset with gusto, and the star of the show is 75-year-old Irene, who helps knit the group together. The contestants have nothing else to rely on apart from themselves and what the island can provide. So, co-operation and practicalities should be at the front of their minds. How much does the push to get dosh get in the way of what should be more important?

The group set up a ramshackle camp, using branches for benches and making use of the rubbish washed up on the beach. When survival guru Bear Grylls sees their efforts at the end of their stay, he isn’t too impressed, and the group realise that they would have built a better home for themselves if they hadn’t been preoccupied with finding the prize money. For food, they get used to a diet of winkles, the occasional iguana and rare treats such as goat, stingray and pineapple. Expeditions for fresh water and anything edible turn into hunts for the money parcels, with the group usually returning empty-handed and with empty stomachs.

As well as the money distracting the group from its practical priorities, it sours how they get on with each other. Some of the group want to pool any money finds, while the two contestants with closest links to the Establishment turn out to be the most selfish. Lord Ivar Mountbatten and an ex-Royal Marine Commando called Marco establish their supposed ‘alpha male’ status early on, encouraged by the rest of the group, disappointingly. The others’ loyalty isn’t rewarded, though, when the duo finds a couple of parcels and keeps the dough inside to themselves. However, the ex-Marine soon loses his crown after getting the group lost in the jungle and, following his hoarded money finds being revealed, barely seems to interact with the others. Mountbatten is of the view that those who are less able deserve less, which is easy to say when you’re born into one of the wealthiest families on the planet.

Wondering who has found money and kept quiet about it makes the contestants become secretive and suspicious. Those who find and prepare the food resent sharing it with those who are hoarding money. Those who are hoarding money resent those who expect an equal share of it for providing the food. Some feel that they need the money more than others, and so should get more, while some feel that it should all be shared out equally. Being stuck on a desert island is a situation where co-operation and collaboration are even more important than in our everyday lives. So it’s a shame that the money ends up creating divisions and ill-feeling, but that’s what it inevitably does. Co-operation wins out, though, and as days turn into weeks, the group learns that it’s best to work together and share future finds. However, when the time comes to leave the island, Mountbatten and the ex-Marine have still pocketed the largest amounts. 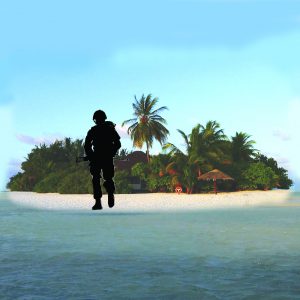 So, how money affects the group on Treasure Island With Bear Grylls isn’t much different from how it affects us all in real life. We spend our time chasing after cash while it gets in the way of life’s practicalities. And we become distanced from those we have to compete with to get enough in the bank, with the most wealth usually ending up with those who are the most ruthless.