Last month’s BBC Panorama shock exposé of anti-semitism in the Labour Party created quite a stir, but also left a lot of people wondering why the BBC has not chosen to do an equivalent exposé of the rampant and well-documented islamophobia in the Tory Party. Balanced unbiased news reporting, in line with the BBC’s own charter? Corbynistas will be fuming about a stitch-up, and not without reason.

The BBC is probably more balanced when reporting overseas conflicts in which the UK government has no direct interest. BBC’s Africa Eye has provided some decent coverage of the Sudan uprising, including a fascinating video report which, in another kind of stitching, put together a patchwork of over 300 phone videos of the June 3 slaughter in Khartoum, when the military junta’s special forces opened fire on peaceful protesters (‘Sudan’s Livestream Massacre’, BBC News, 12 July ).

The report made the point that, while phones can’t stop bullets, the near-ubiquity of mobile phones means that the world has eyes everywhere, and no junta can keep its massacres a secret anymore. Not that public exposure will necessarily deter a ruthless regime, however in the globalised trading era it’s bad advertising which makes a country look weak and unstable, and will deter foreign investment.

If the military rulers in Sudan expected a massacre to clear the streets and stop the protests, they were right, but not for long. Within a fortnight the protests were back, and bigger than ever. The junta responded by shutting down the internet, forcing protest organisers to rely on text SMS or land-line telephone, a fiddly and expensive business which could reach only a fraction of its target audience. But while the blackout impeded the protesters, it was catastrophic for the Sudanese economy, costing hundreds of millions in lost trade. Was this nevertheless a pyrrhic victory for the junta, the BBC wondered later that month (‘Has an internet blackout killed Sudan’s revolution?’, BBC News, 21 June ). No, as it turned out. In July the military rulers climbed down and acceded to partial civilian rule. The point to take from this is that while modern communications technology is a wonderful force for democratisation, it can always be censored or shut down, and so should not be relied upon. But none of that matters if the courage and determination of workers is strong enough, as in Sudan.

This is your capitalist brain on drugs

Drug firm Pfizer has discovered that its own arthritis treatment drug Enbrel also seems to cut the risk of Alzheimer’s disease by up to 64 percent (New Scientist, 15 June, p7). Great, you might think. Over to Pfizer to start cranking out Enbrel by the container load.

Oh but wait, says Pfizer. Actually, our patent on this is due to expire soon, so we won’t be proceeding with this.

What, you say, you mean you’re not going to make any?

But a 64 percent risk reduction – are you kidding? That blows every other Alzheimer drug out of the water!

But surely you can get your patent extended, you insist. Old drug, new use, it’s been done before.

Pfizer bites its lip. Thing is, trials cost, and we’ve all lost a packet on failed clinical trials before. All previous Alzheimer’s trials have failed, which is why all the major drug firms have closed their Alzheimer’s research units. Basically it’s a huge money sink.

Well, you ask in increasing desperation, can’t you get government funding to cover this?

Well, can’t you release the patent and let another firm make the stuff then?

Pfizer looks shocked. But that wouldn’t be fair – it’s our drug!

Why not make a cystic fibrosis drug instead? Drug firm Vertex charges £100,000 a year for the treatment Orkambi, which the NHS won’t pay for, so kids die (New Scientist, 15 June, p9). But because Vertex doesn’t have a valid patent in Argentina, a local firm is producing the drug at the bargain rate of £23,000 pa. Vertex is furious, of course, claiming that their sale price is a fair reflection of the billions they sank into R&D. Meanwhile the parents of kids with cystic fibrosis have been forced to create a ‘buyers club’ in order to buy wholesale and get the cost down further, a move clinicians describe as ‘a desperate act’.

Patents in capitalism are intended to reward and defend intellectual effort and financial investment. But the flip side is that patents also kill people either by setting unaffordable prices or stopping production at source. In socialism you might get the kudos for an invention, but you wouldn’t get a patent. 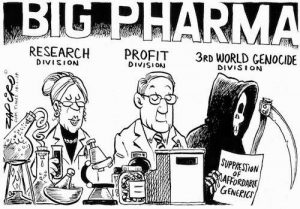 This is your capitalist brain on dregs

Two bumper harvests in Brazil have flooded the international market with so much coffee that the price farmers can get has plummeted to below $1 a pound (BBC News, 11 July ). Since coffee is a cash crop that farmers sell instead of growing food they could actually eat, when the price hits the floor farmers will turn to other cash crops or else subsistence. Add in the number of farmers also going bust or abandoning farming, and you’re looking at a massive scaling back of future coffee production. Enjoy that cappuccino while you may, because in a few years’ time you might only be able to afford re-boiled dregs. How can a good harvest turn into a disaster? That’s capitalist ‘logic’ for you.