If you cast your mind back, at Christmas the Queen sat in her golden chair, in a gold encrusted room, in front of her golden piano, and had the gall to suggest that the 100th anniversary of an air force which has bombed countless civilians, as well as fellow workers in uniform (they were mostly compelled to wear) was something worth celebrating. This was while prattling on about ‘faith and charity’, yet how many of us were left wondering just how many lives had been lost due to her governments’ vicious welfare cuts and austerity measures?

And speaking of faith and charity, every time the multi-millionaire ‘Saint Bono of Ireland’ snaps his fingers another child dies of hunger or starvation in Africa. This is while the church he follows drowns itself in riches – and the Pope sits on his throne in his palatial residence in the Vatican city state, with his golden sceptres and crowns piously praying for the poor, while desperately trying to deal with the fall out of, oh so many, paedophile priests, and the Vatican Bank rakes in the pennies, pounds, euros, pesos, plus any number of other currencies dumped on collection plates globally by the deluded poor, in the vain hope of ‘the meek’ inheriting anything, let alone the world! While at the same time they are told to: work all day, live on hay, and you’ll get pie in the sky when you die.

That’s not to say that any of the other countless organised religions and churches of the world fare any better in the truth, justice, humility or humanity stakes.

We apologise for discomforting the discombobulated – but this is no time for mealy mouthed platitudes – not while the poor, dispossessed, and downtrodden are demonised by the maniacal, mass media machine as workshy layabouts and scroungers, and hurried off this mortal coil, by either enduring a shortened lifetime of poverty and illness, wondering where the money for next week’s rent, or tomorrow’s dinner is coming from. Or by being subjected to being bombed in the name of democracy by the world’s regional superpowers or their despotic allies, in search of oil, new raw materials and markets or the simple lust for ever greater power, and or, territory.

We were also informed recently, by the UN, that we have 12 years to stop escalating global warming or face ever-increasing, ever-hastening, environmental degradation. There is much debate as to exactly how bad this catastrophe is or will get, but not much is likely to change given climate change deniers, capitalism’s past record on effectively solving the problem, national state rivalries and competition, and the recent climate change conference in Poland being sponsored by coal boards and its halls and rooms, being filled by coal, of all things (COP24 – the 24th such conference!). It seems the best we can expect is continued rising sea levels, more stormy weather, more forest fires, more droughts, and more desertification, which will seem certain to disrupt the lives of millions.

At first sight, to the casual observer, it may seem that these things are unconnected and unfixable, but do not fall into easy despair, and throw up your hands in apparent helplessness, at all this needless death, and wanton destruction.

The simple fact of the matter is, there is one reason, and cause behind all of it, and it can be fixed – but only with your conscious understanding – and participatory help.

We are taught from birth that ‘our country’ and its people are superior to all other nations and their inhabitants, and that if only we all stopped being negative and hyper-critical, and worked together for ‘the common good’ then ‘our country’ can become great again and a new fairer dawn will be just around the corner. Funny how it never materialises, and we’re still left in the dark and fed a constant diet of ideological bullshit!

That simple reason and cause is our masters’ rapacious greed and lust for power, i.e. capitalism. Whether that be the naked private capitalism of the UK, USA, and Western nations, or the cloaked and hidden state capitalism of China, Cuba, Venezuela, the former Soviet Union etc (those countries which demonstrably falsely call and called themselves communist/socialist).

Capitalism today is the global politico-economic system. Nothing is produced under capitalism unless it realises a profit. The bottom line is all. The capitalist mode of production breaks all human relationships, alienates us from ourselves, the environment we are embedded within, and require for our survival – capitalism has only one requirement – all other considerations are moot. It seeks only to create more capital, whatever the cost, to reproduce itself without limit, or end, no matter the real social costs to humanity, or the planet. 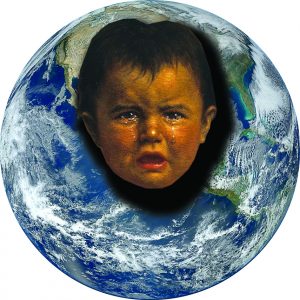 The simple solution to this problem is a truly democratic society – a society of production for human (environmental and planetary) need not profit and greed, a leaderless, classless, stateless, society of equals, consciously working together in harmony as one people, Homo sapiens sapiens (forgetting the lies of ‘race’ and religious strife and division etc we were indoctrinated with at school, and are exposed to daily by the mass media machine). A participatory democracy of economic and political equals where no-one holds power over any other, by force, or by economic compulsion.

We don’t demand ‘jobs for all’ or a minimum, or even maximum wage – the continuation of a gilded sparkly wage-slavery, with incremental steps towards a brighter future that will never arrive. We have no such paucity of vision or ambition.

Instead, we demand the end of wage slavery and redundancy for all!

Make the bread-heads and greed-heads, the ‘1 percenters’ who own and unjustifiably control, the vast majority of the world’s wealth, and resources, for their personal gratification, a phenomenon from the past too (the true vampiric scroungers who live by exploiting the planet and its people).

Do not support capitalist parties, with their false rhetoric, false promises, and demonstrably false agendas for ‘a brighter better tomorrow’ and help make them redundant.

Support no capitalist institution or ideology. Instead support yourself and your right to do useful pleasing work, of real social, and personal value.

Help us make the need for a socialist party redundant and fight for a real future for ourselves. For the environment we are embedded within. For a revolutionary system change, with no false promises, or hidden agendas.