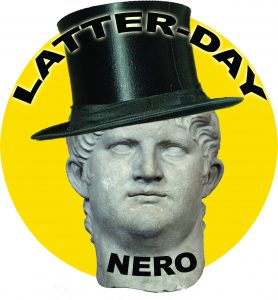 ‘The politics that’s needed to prevent the climate catastrophe—it doesn’t exist today. We need to change the system, as if we were in crisis, as if there were a war going on’. Teenage climate activist Greta Thunberg, who shot to global prominence in 2018 by missing school days to go on strike alone outside the Swedish parliament in Stockholm, is disarmingly frank about herself and the task as she sees it:

‘I have Asperger’s syndrome, and to me, almost everything is black or white. I think in many ways that we autistic are the normal ones and the rest of the people are pretty strange. They keep saying that climate change is an existential threat and the most important issue of all. And yet they just carry on like before. If the emissions have to stop then we must stop the emissions. To me, that is black or white. There are no grey areas when it comes to survival. Either we go on as a civilization or we don’t. We have to change.’

It’s no longer a matter of worry or concern. Now there’s desperation in the air. Following Greta Thunberg’s initiative, schoolchildren around the world are going on strike. She was invited to speak to the World Economic Forum at Davos, where she gave them short shrift: ‘Some people, some companies, some decision makers in particular have known exactly what priceless values they have been sacrificing to continue making unimaginable amounts of money. I think many of you here today belong to that group of people’ (Wikipedia).

Many politicians, eager to retain their eco-credentials while also neutralising a disruptive influence,  have showered hypocritical praise on her, even nominating her for the Nobel Peace Prize, but it hasn’t melted much ice. The girl who’s been compared to Joan of Arc and Pippi Longstocking has made it plain that tokenism isn’t enough, she wants direct action: ‘So everyone out there, it is now time for civil disobedience, it is time to rebel.’

Thinking along similar lines, a new non-violent direct action movement, Extinction Rebellion, has formed in the past twelve months, making Chartist-like demands for immediate government action including a Citizens’ Assembly to oversee climate action ‘as part of creating a democracy fit for purpose’. In London this past month demonstrators have been gluing themselves to trucks and trains and bringing traffic in the city to a standstill in action reminiscent of Reclaim the Streets back in the 1980s. The movement is supported by hundreds of academics through open letters which state among other things that ‘ Our government is complicit in ignoring the precautionary principle, and in failing to acknowledge that infinite economic growth on a planet with finite resources is non-viable […] The “social contract” has been broken, and it is therefore not only our right, but our moral duty to bypass the government’s inaction and flagrant dereliction of duty, and to rebel to defend life itself’ (Wikipedia).

If that wasn’t clear enough, a second open letter in December last year was even more direct: ‘Political leaders worldwide are failing to address the environmental crisis. If global corporate capitalism continues to drive the international economy, global catastrophe is inevitable.’

Strong stuff. Their solution? ‘We further call on concerned global citizens to rise up and… do whatever’s necessary non-violently, to persuade politicians and business leaders to relinquish their complacency and denial. Their “business as usual” is no longer an option. Global citizens will no longer put up with this failure of our planetary duty. Every one of us, especially in the materially privileged world, must commit to accepting the need to live more lightly, consume far less, and to not only uphold human rights but also our stewardship responsibilities to the planet.’

Now David Attenborough, to many people the ultimate authority on life on Earth, has produced a new BBC documentary warning of biblical End Times: ‘If we have not taken dramatic action within the next decade, we could face irreversible damage to the natural world and the collapse of our societies’ (Climate Change – The Facts, BBC One, 18 April).

Drastic as this sounds, it’s not even the worst forecast out there. A 2018 paper by a University of Cumbria academic is so damning that it has reputedly resulted in people seeking therapy (www.lifeworth.com/deepadaptation.pdf). Arguing that it is now simply too late to consider how to limit global warming, Professor Jem Bendell instead promotes the idea of ‘deep adaptation’ in the face of ‘imminent near-term social collapse’. That’s starvation, violence, permanent water and power outages, riots, and all coming to streets near you within the next ten years, he says.

The evidence for global warming is so well known that it is not worth repeating. Even the most die-hard denialist has to face the fact that the twenty warmest years on record have been in the last 22 years. Professor Bendell’s evidence for imminent social collapse rests largely on two factors. One is Arctic ice melt and the loss of the ‘mirror effect’, where heat is mirrored back into space. The loss of this effect is expected to add the equivalent of an additional 25 percent of all global warming over the last 40 years. The second factor is more speculative: submarine methane hydrates, gigantic deposits of frozen methane on the ocean floors, could be released into the atmosphere by oceanic warming causing general social collapse and possibly a wholesale extinction event from which humans would not be excluded. ‘If all the methane gets out’, said an International Energy Agency spokesman in 2014, ‘we’re looking at a Mad Max movie’ (see this column, July 2017).

Socialists, if we were numerous enough and had a sufficient media profile, would be getting out in front of this debate and telling Greta Thunberg and Extinction Rebellion in no uncertain terms to stop putting any faith whatsoever in governments and business leaders, because these people aren’t the solution to the problem, they are the problem. It’s no good talking about ‘global corporate capitalism’ as if there was some other form of ‘clean’ capitalism we could adopt instead. A system predicated on private ownership and the accumulation of profit simply cannot be made to work in the interests either of the majority of people within it, or of the planet itself. It might seem self-evident to activists that we are all in the same boat, environmentally speaking, but the biggest environmental mistake of all is the one they are themselves making, which is that the rich 1 percent who ultimately control what happens on Planet Earth can be cajoled, persuaded or reasoned with if it means them giving up their power and ownership. Like a lot of latter-day Neros, they will keep their wealth and privilege at all costs, even if means watching the Earth burn.

Greta, and Extinction Rebellion, if you’re reading this, now is not the time for rebellion, it’s the time for global revolution. We need to stop making helpless appeals to princes, and start taking over their palaces.