Wood for the Trees: Constructing Division 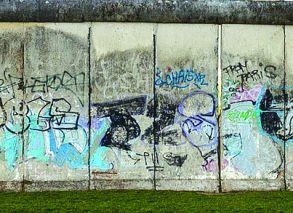 Donald Trump and his supporters probably think of themselves as political innovators finding solutions to capitalism’s intractable problems with ‘Trump’s Wall’ being an example of dealing with the perceived Gordian Knot of ‘border security’. Part of the populist mandate is to respond to capitalism’s periodic crises by blaming foreigners for economic hardships. For this reason immigration is a convenient scapegoat and sometimes promises made during elections have to be seen as being acted upon once power is achieved; not that the more astute members of the political establishment believe necessarily in the effectiveness of any of their manifesto policies but not to implement at least some of them would injure the public image so carefully created by their PR department. Donald’s affection for his wall seems to be an example of this – together with the tax cuts for the super-rich this is another populist policy that his ego demands must be seen to be implemented. That it represents any kind of political innovation is found to be, as with most reactionary answers to practical political questions, historically without foundation.

One of the earliest examples of such a political edifice is, of course, known as ‘The Great Wall of China’. Started in 220 BC during the reign of the first emperor of China this famous structure was rebuilt time and again until 1644 AD. At its apogee the 20 ft. high wall stretched for an amazing 5,500 miles. Built as a defence against the marauding steppe tribes it also served as a border control that regulated taxation from those who traded on both sides of the wall. As such it represented a statement of power for the empire combined with a flourishing source of income for the emperor. The same was true, on a much more modest scale, of the wall attributed to the Roman Emperor Hadrian in England. Begun in 122 AD its walls were clad in a white plaster that made it prominent for miles and it too represented both a statement of power combined with the facility of border taxation. Not conceived of as primarily an absolute defence against any concerted invasion (whose army could have, presumably, used boats to circumvent it) it did at least end the casual raids of plunder by the Pictish tribes. It also represented the ‘limits’ of the Roman Empire in the northwest together with the Black Sea in the east, the river Danube in the north and the Sahara in the south. Although the preceding examples are located in what is called ‘the ancient world’ the implication to some minds that the world has always been divided by borders must be corrected by historical perspective; our species has existed for some 250,000 years and the construction of defensive barriers is only found, at first in cities, in very restricted parts of the world some 10,000 years ago. The ‘Neolithic revolution’ enabled an agricultural surplus to be created which in turn needed to be protected from raiding nomads by the new ruling classes who owned it – hence fortification.

What do the walls of the modern era represent? The two most depressing examples were the Berlin Wall and the present wall in Gaza. After the Second World War Germany was divided by the victorious allies into two zones of east and west. The Russians took the eastern sector but agreed to western access to the capital of Berlin. This proved to be a centre for those wishing to escape to the west and in response Stalin built a fortified border that included the infamous wall in Berlin. When the Russian empire fell the destruction of the wall became a symbol of ‘freedom’ for those oppressed by the one-party state of East Germany. Completed in 1996 the wall that separates the Palestinian Gaza Strip from Israel is also an echo of the Second World War and what happened to the Jews. After that war a militant group of Zionists agitated and fought for a Jewish state to be set up in what they claimed as their ancient biblical homeland. Not surprisingly those Palestinians who had been there for hundreds of years objected to the confiscation of their homes and have fought a guerrilla war with the Israelis ever since. The wall represents this unresolved conflict and for some Israelis is an uncomfortable reminder of their predecessors’ own incarceration behind a wall in the Warsaw ghetto built by the Nazis in the 1940s. Our last example of a political wall is much less notorious on the world stage but was a contemporary of the Warsaw wall and was to be found in a small town called Cutteslowe in Oxfordshire, England. Nine feet tall and topped with spikes two walls were built to separate a private housing estate from the nearby council dwellings. An embarrassment to a country supposedly fighting for freedom and justice one of them was ‘accidentally’ demolished by a tank during war exercises – it was rebuilt only to be brought down, this time officially, in 1959.

Walls and the borders they guard are only made possible by the illusion of a divided world. Some of them pretend to be mere extensions of the natural barriers that have given rise to the multiplicity of human cultures; this is one of the great lies of nationalism which masks the real economic motives of ruling classes and the political ignorance of those who actually construct them. The great paradox is that we live in an integrated world economy which makes the nation state an anachronism that is only sustained by the propaganda of those who need the excuse of the ‘foreign’ threat when capitalism experiences one of its inevitable economic cataclysms. That elements within ruling classes are also trapped in their own nationalistic ideology is very evident in the Brexit fiasco. The unintended threat that leaving the EU poses to one of England’s last colonies (Northern Ireland) in terms of its border with the rest of the island is yet another example of how little some of the propagandists of the ruling class understand the political reality of the twenty-first century. As fast as capitalism is integrating the world economically it is tearing it apart politically – a contradiction that can only be resolved by global socialism.