Pathfinders: The Far Side

Last month saw a lot of coverage of China’s ‘far-side’ moon landing, which in a technical first gave us close-up views of what’s possibly the most boring landscape in the solar system. While various scientific objectives were advanced by pundits to justify this extravagant operation, some of them even possibly valid, nobody was in any doubt about the real reason. The Chinese state did it just to show off. It would of course be churlish to suggest they could have spent the money on something more useful, such as helping the estimated 30 million Chinese living below the poverty line. Shame though that they didn’t plant their probe in the Sea of Tranquillity right next to the Apollo 11 lander, just to prove the Americans really went there in 1969, which might finally shut up the Moon Hoax conspiracy nuts. Indeed that’s exactly what the head of Russia’s space agency proposed to do recently ‘to verify whether they’ve been there or not’ (Independent, 24 November). Not that this really would shut up the conspiracy bores anyway. They would just claim that the Russians had faked their trip too. 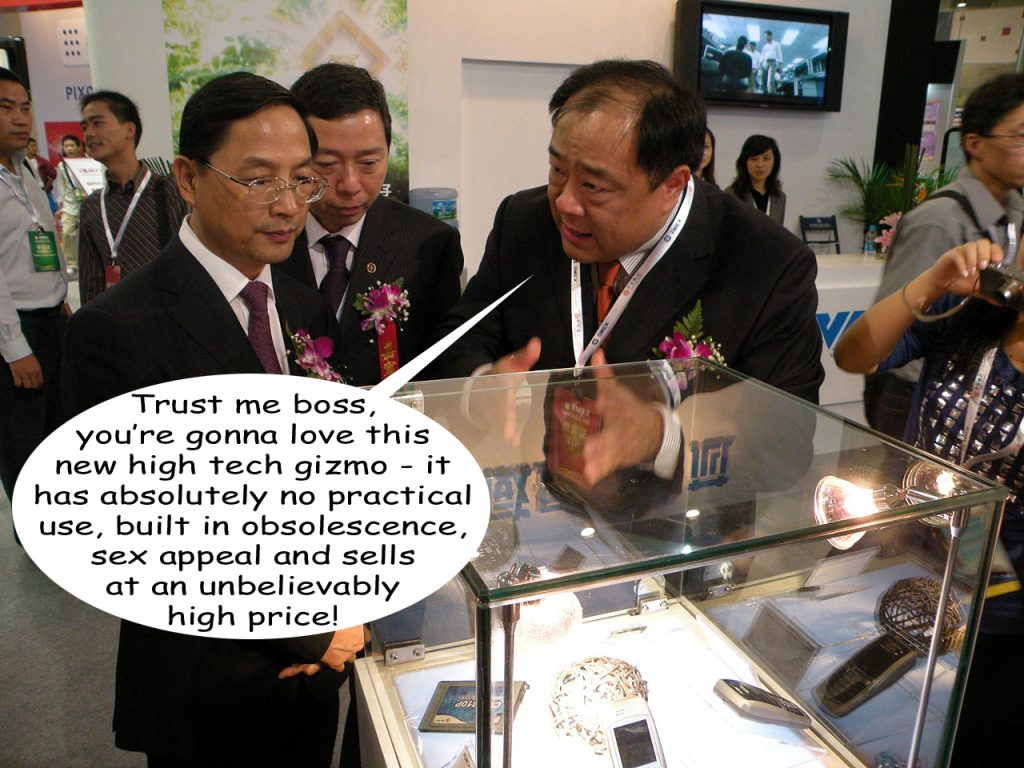 There is in the contemplation of certain technological feats a strange sense of detachment from Earthly realities. Instead of ‘how?’ you find yourself asking ‘why?’ Take the annual CES technology show recently displaying the latest in allegedly must-have gadgets in Las Vegas. Who for instance is ever likely to need an indestructible notepad that works underwater, a digital plank of wood, a robot pet or one that draws doodles on your walls, a skin printer that covers up facial lines, an automated laundry folder the size of a wardrobe, an advent calendar that defeats ‘smell fatigue’, a walking car, or a light sabre you can really hit people with? It all makes bendy phones and wall-size TVs seem positively conservative. No wonder one visitor expressed his feelings thus: ‘I feel my sanity draining away’ (BBC Online, 11 January). In a socialist society that’s solved the most pressing social issues already, such as hunger and homelessness, you might certainly argue that there’s a place for weird and wacky inventions. Nobody wants to be a killjoy, after all. But there are certainly bigger priorities right now. Instead of inventing things that people don’t need, didn’t ask for and mostly can’t afford anyway, why don’t the tech boffins think about what people really do need?

Well the short answer is that invention in capitalism isn’t driven by necessity so much as buying power. The nerds are trying to produce things that people who already have too much stuff and money will be willing to spend that money on. So the rich are targeted with ever more techno-tat while the poor remain ignored. As for the long answer, well technology won’t give us what we need anyway, because what we really need is a change in society and the abolition of class inequality, and you can’t knock that up in a laboratory or a garden shed.

One controversy at CES was the banning of an award-winning innovation, which was a women’s robotic sex toy. Quite why this was banned was unclear. The organisers claimed it was ‘inappropriate’ although they didn’t see anything inappropriate about the Virtual Reality Porn room next door to the expo, which saw over a thousand visitors on the very first day. Many of the visitors described the experience as ‘awesome’, or words to that effect, and appeared to appreciate it far more than the debut appearance of the creepy AI sex robot that swivels its head, blinks its eyes and talks as if it has had its jaw wired. While the CES organisers contend with an ongoing image of male bias and prejudice, the idea of virtual reality porn suggests a further inspiring notion: virtual reality socialism. Maybe in the absence of a real global revolution for common ownership we could invite people to put on a VR headset and ‘see’ socialism in action. A friend’s comment in response to this idea was ‘You mean you’d put on the headset and all the beggars and rough sleepers would disappear off the streets?’ Er, yeah, we guess so, among other things, although in that case you’d better watch where you put your feet.

Contrary to what creationists seem to think, if evolution was really driven by a conscious designer, that designer would get the sack for negligence and incompetence. No engineer – much less an omnipotent being – would design the mammalian eye with blind spots, or send the giraffe’s laryngeal nerve on a long and pointless route from the brain all the way down its neck and around the heart before looping back up to the larynx. Similarly, why design plant photosynthesis to be only 2 or 3 percent energy efficient, when we can already do better than that with today’s photovoltaic cells? Well now a team has figured out how to tweak plant chemistry to increase its energy conversion rate, and first results have shown a 40 percent increase in crop biomass (New Scientist, 12 January). Now that’s what we call useful technology, although there is bound to be a backlash from anti-GM protestors who will insist that what is ‘natural’ is good and what is artificial is therefore bad. The fears of such protestors have not been borne out by experience over the decades GM has been used in America, China and South-East Asia. The world has not after all been overrun by invincible killer GM weeds or new killer pests. If socialism were established tomorrow and food production needed to be ramped up quickly, GM technology continues to look like a good bet.