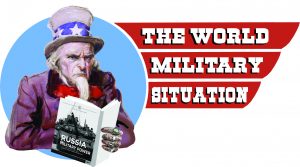 The military situation in the world is as threatening today as it was during the Cold War between the West and the old Soviet bloc.

The armed forces of nuclear powers are in direct confrontation in a whole series of regions.

In the new Cold War between Russia and the West, American and Russian warships and aircraft have repeatedly come close to colliding in the Black Sea, offshore from the proxy hot war in eastern Ukraine, as well as in the Baltic Sea and adjacent airspace. Following the defeat of the Islamic State, Russian, American, and now Turkish forces are more clearly engaged on opposite sides of the civil war in Syria.

In the Far East the confrontation between the US and North Korea may soon resume. There is also a potential for clashes between US and Chinese forces in the contested waters of the South China Sea and in or around Taiwan. According to analysts, China plans to be ready to invade Taiwan by 2020 (Ian Easton, The Chinese Invasion Threat, 2017).

All these standoffs provide plenty of scope for accidents, mistakes, misunderstandings or unauthorised – or, indeed, authorised – actions that might spark nuclear war. Many such past incidents are now coming to light as archives are opened to researchers.

During the Cuban missile crisis, to draw an example from Daniel Ellsberg’s new book The Doomsday Machine: Confessions of a Nuclear War Planner (2017), the US navy used depth charges to try to force a Soviet submarine to surface. Two of the three officers on the submarine who jointly controlled its nuclear weapon, unable to establish radio contact with higher authority and believing that war had already begun, wanted to fire. The third man refused to cooperate, thereby saving the world.

It is only thanks to a remarkably long run of good luck that the world has escaped Armageddon so far. But how much longer can our good luck hold?

Then there are the many other actual and potential confrontations in which some or all of the sides do not possess nuclear weapons. The ‘mobile phone war’ over access to precious metal ores like coltan drags on in Congo. Fighting continues in Libya, Somalia and Afghanistan. Saudi Arabia, aided by the US, is waging a genocidal war in Yemen. Iran is back in the American ‘crosshairs’.

The ‘scramble for the Arctic’ still looms ahead, pitting not only the Western powers against Russia but also the US against Canada.

Neocons in the ascendant

Many conflicts, though far from all, stem to one degree or another from US foreign policy. Under Trump the neocons are again in the ascendant after a partial ‘reset’ under Obama, as reflected in his nuclear deal with Iran. The aim of the neocons continues to be ‘regime change’ wherever governments are insufficiently susceptible to US influence, using any means including military force (when judged necessary and feasible). Targets have included ‘leftist’ regimes like Cuba and Venezuela, Ba’athist and other Arab nationalist regimes (now toppled except in Syria), Iran, North Korea, Russia-oriented regimes in the former Soviet Union (Ukraine, Belarus) and ultimately Russia and China.

A specific source of conflict – in Ukraine, the Caucasus and the South China Sea, for instance – is a difference of opinion between the US and other great powers concerning spheres of influence. Russia, China and India claim special rights to intervene in areas adjacent to their borders. The US, however, recognises no such rights (except for itself).

A new nuclear arms race is now underway. It seems unlikely that the US and Russia will agree to extend the ‘New Start’ arms control treaty, which is due to expire in February 2021. In his speech to the nation on 1 March, Putin announced that Russia has tested new types of delivery vehicle, including hypersonic missiles and underwater drones, that can evade missile defense systems and maintain Russia’s ability to deter a US first strike.

The Trump administration has made it clear that action against ‘adversary’ states will henceforth have priority over the fight against terrorism. This issue poses a dilemma to the neocons because the Sunni Islamists who attacked the Twin Towers on 9/11 and have perpetrated more recent acts of terror in Western Europe are backed mainly by Saudi Arabia and the Gulf states, which are considered not adversaries but allies.

In the immediate aftermath of 9/11 it must have seemed necessary to assure the American public that the fight against terrorism would take priority over everything else. At no time was this ever really the case, but actions in pursuit of the neocon agenda, such as the invasion of Iraq, were fraudulently justified in terms of anti-terrorism. The passage of time without further acts of Islamist terrorism in the US has evidently emboldened policy makers to state frankly that terrorism is a secondary concern.

Objectively the global pattern of power continues to shift towards multipolarity. No state now has the power resources to dominate the world. In reality all states are now local or regional powers. The pursuit of global hegemony to which the US has reverted is doomed to fail, but is all the more dangerous for that reason. It is a deeply irrational strategy, fuelled by the trend towards the privatisation of armed forces and military industry. It reflects not the interests of the American capitalist class as a whole but the special interests of the military-industrial complex – the ‘war business’.

But what can ordinary people do about all this? The extreme gravity of the situation makes it easy to fall prey to despair. The forces at work seem much too powerful for us to challenge, let alone abolish.

However, this is a false impression deliberately maintained by our masters. They do not like to admit that they care about popular opposition. In fact, we are not as helpless as we think. Thus Ellsberg reports archival evidence that public protests against the war in Vietnam really did constrain the options of US policy makers — in particular, helping to prevent the combat use of nuclear weapons.

The story is not over until it is over.