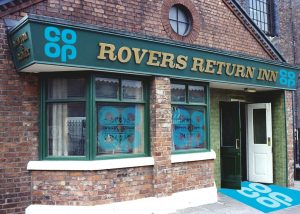 The Co-op has recently announced that it will open a hundred new food stores across the UK, although you won’t be able to shop in one of these unless you’re a fictional character. That’s because it’s going to open on Coronation Street, as part of ITV’s biggest product placement deal to date. The plans also include a branch of Costa Coffee appearing in Weatherfield for Gail and Ken to buy their skinny lattes from. Soaps have always had an association with sponsorship – the term ‘soap opera’ comes from how early serial dramas used to be funded by soap manufacturers.

Product placement, or embedded marketing, is when a company pays for its commodity or brand to be included within a medium, especially a TV programme, film and, these days, YouTube video. This marketing strategy has been around since the 19th century, with rumours that works by Jules Verne and Eduoard Manet of all people featured real-life brands they had been paid to include. American movies and television shows have incorporated paid-for promotion of products for as long as the media have been around. For example, the characters in One Tree Hill often have cans of Sunkist soft drinks in their fridges, courtesy of a marketing deal. Historically, product placement has been illegal in Britain, although this didn’t stop advertisers getting their brands within programmes, such as coverage of sponsored sports events.

The law changed in 2011, and the first deal involved Nestle paying for a coffee machine to appear in ITV’s magazine show This Morning. The regulations were probably relaxed to keep commercial television more attractive to advertisers who might otherwise turn their attention to the ever-expanding marketing opportunity that is the internet. By late 2015, ITV alone had broadcast over 4,000 hours of programmes featuring product placement, including viewer-magnets like The Only Way Is Essex, The X-Factor and I’m A Celebrity… Get Me Out Of Here!, as well as soap operas. ITV Media’s website contains a wealth of vomit-inducing corporatespeak: ‘offers a truly unique marketing opportunity as products are showcased within natural settings more relatable to viewers and in turn, providing inspiration or in some cases, validation for purchase choices’.

The website helpfully gives some examples: ‘Emmerdale residents were thrilled to discover that David’s shop had now begun stocking McCain’s frozen foods, and on-screen families were soon seen tucking into delicious chips for their tea’. And it proudly boasts about the first instance of ‘behaviour placement’ in a deal between Visa and Corrie: ‘the action of contactless payment was … threaded through into the storylines, with completely natural interactions; impacting even the most resistant non-users. Not only did Visa show characters using the card machine (complete with the beep sound you’d hear in real life!), but they also placed stickers in key locations. What could make the action seem more everyday than Norris using Contactless to buy his milk from Dev’s shop?’.

Telecommunications regulator Ofcom has set guidelines for how product placement can be practiced in the UK. Some products (such as alcohol, tobacco, baby milk and medicine) and programmes (like the news, children’s shows or any on the BBC) can’t be used in this way, and broadcasters must display a ‘PP’ logo on-screen for a few seconds in relevant shows. A placement must be ‘editorially justified’ and not give ‘undue prominence’ to the product, although these terms could be open to interpretation. And the rules don’t apply to films or programmes made elsewhere and if no payment or deal involves the broadcaster, which is why, for instance, the BBC can transmit the film Cast Away, despite it prominently including the FedEx brand. It’s also why all the mentions of the Co-op, Visa, McCain’s etc in this article don’t count as product placement, as these firms haven’t coughed up to the SPGB to promote their wares (and aren’t likely to).

When product placement is too noticeable, then it jars. The 1988 film Mac and Me wasn’t received well partly because its placed products were so blatant, with Coca-Cola, Sears, Skittles or McDonald’s featuring in what seems like every scene. More recently, advertisers have been a bit more sophisticated in their approaches. The American sitcom Black-ish has had a plotline paid for by Procter & Gamble, in which the characters are inspired by P&G’s own real-world campaign to raise awareness of racism. The show has often discussed social issues, and so it should, but there’s something odd with a debate about racism being commercialised in this way. Ofcom’s guidelines wouldn’t allow something to be made in Britain with the levels of product placement seen in Mac and Me or Black-ish (yet), but when the tactic is more subtle, then it’s arguably more insidious. When Rita in Corrie gets back home from shopping and unpacks a Co-op bag while she’s chatting with Gemma, the advertising is almost subliminal. It’s one thing to know you’re being enticed to buy a product, it’s another to be unaware you’re being manipulated.

We’ve got used to the commercial breaks which interrupt what we watch on most channels, but they don’t invade the programmes in the same way as product placement does. We pay a visit to Coronation Street for the characters, plots and ideas, and expect it to somehow be ‘above’ being cheapened by advertising. But TV shows and films aren’t made in a bubble away from market forces, they have to get funding, attract viewers and make money. The market system reaches into anywhere there’s a buck to be made, even into places that aren’t real.