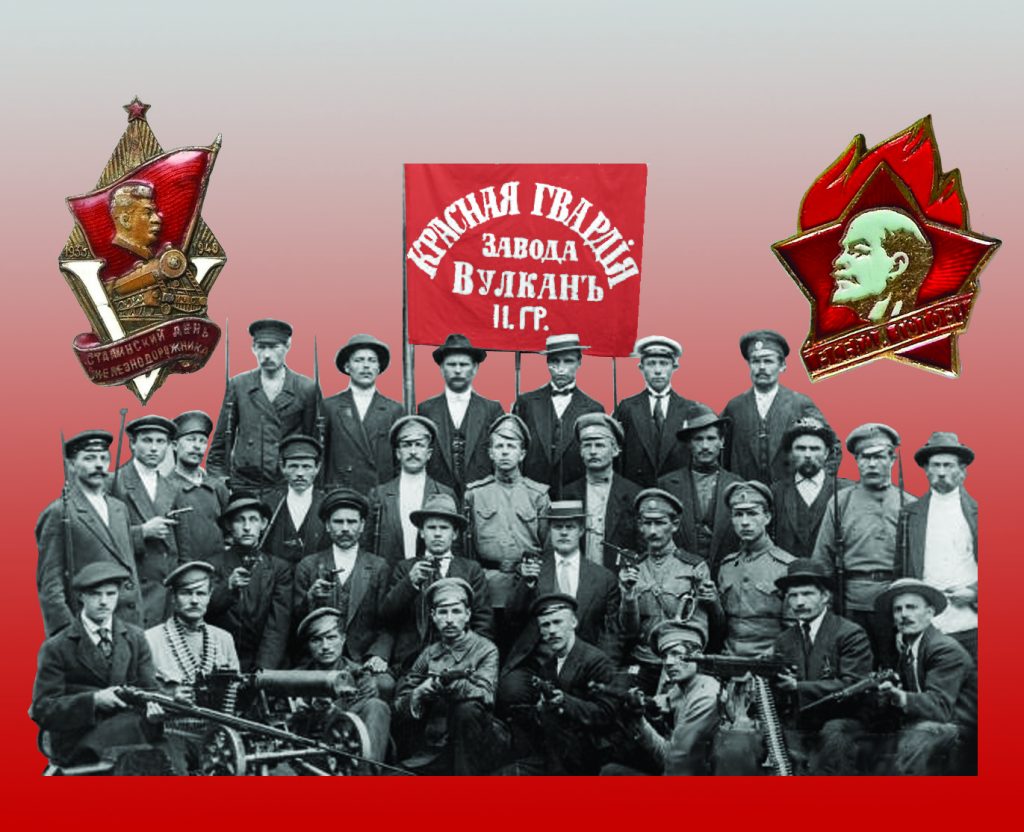 The concluding part of our series on revolutions and the ideology under which they are carried out.

Russia has always represented an enigma to historians. It is obviously connected to European culture but it is also recognisably very different. The reasons for this have pre-occupied many politicians, historians and economists in the west for centuries; Marx, famously, thought of it as a dangerous bastion of reaction that would confront and oppose the development of socialism. One element of consensus among the attempts to understand Russia’s relatively slow economic progress is the overwhelming scale of the country. Until the 19th century the population was too small to serve the needs of both agrarian feudalism and the developing capitalism of the cities. A series of military defeats seriously curtailed international trade and the internal market was enfeebled by the population’s lack of spending power. The retention of serfdom was a mechanism specifically devised by the feudal lords to chain workers to their estates and prevent them from either drifting off into the vast wilderness to farm for themselves or search for better wages in the cities. This was recognised as a handicap by some of the more progressive elements within the Russian hierarchy, including some of the Tsars. Economically they could not compete with the industrial might of Britain, America and Germany and so were trapped in a backward economic cycle. Many of the powerful aristocrats were aware that industrialisation needed better educated workers and a wealthy middle class, and they feared the political implications (the French Revolution being their nightmare scenario). However these economic changes were unstoppable and the collision between the anachronistic Tsarist autocracy and emerging capitalism became devastatingly obvious with the disaster of the First World War. Of all the great powers Russia was the least equipped to fight such an industrialised conflict and the stage was set for the Russians to make their revolution.

In 1905 the Russian bourgeoisie entered into a coalition of rebellion which petitioned the Tsar for political change but it was ruthlessly crushed and many were killed. In a concession to the mood of the country together with the need to end a nation-wide strike a parliament (Duma) was promised. When it did not do as it was told, it was promptly shut down by a Tsar who, like Charles I of England and Louis XVI of France, could not countenance any challenge to his power of ‘divine right’. In the spring of 1917 the war was going so badly that the Tsar was forced to abdicate and the Duma was again reassembled. Among the political parties present within this parliament were the Russian Social Democratic Party who, like the other members of the ‘Second International’, gave lip service to the ideas of Marxist socialism but were, in fact, bourgeois reformists. If they had not tried to continue the war in coalition with liberals and conservatives it is possible that Russia would have followed the traditional path to capitalism. When they made this tragic mistake and the country fell into chaos again the local and regional councils or ‘soviets’, formed during the struggles of 1905, filled the power vacuum. Not unlike the ‘communes’of the sans-culottes during the French Revolution these organisations competed with central government for power. As has been already discussed in depth by this journal in October, the Bolsheviks came to power by promising to stop the war and feed the people. They at least managed the former undertaking but at the cost of a military dictatorship together with the nationalisation of the means of production that was to give the state complete power over every aspect of Russian life. At first the new regime embraced the soviets but it was only a matter of time before their power was usurped by the Bolsheviks and they survived in name only. As with the English and French revolutions the result was capitalism, or rather in the case of Bolshevik Russia something called state capitalism. For the immense majority, it amounted to the same thing: exploitation by, and subjugation to, a small power elite.

If we look at the ideologies of those competing for power in Russia at that time what do we see? Certainly the liberals and conservatives believed in some of the enlightenment ideals that preceded the French revolution but, ironically, it was Lenin who really admired the Machiavellian tactics of the likes of Robespierre. Lenin’s obsession with power and leadership was essentially bourgeois as were, to the surprise of Rosa Luxemburg upon meeting him, most of his moral and cultural values. Why was it then that he so doggedly proclaimed himself and his regime as socialist?  Perhaps he was so enamoured by the political insights and intellectual rigour of socialism, especially through the works of Karl Marx, that he was reluctant to abandon them in the light of Russian political reality even after the non-appearance of the anticipated European-wide socialist revolution. He identified himself with socialism to the extent that he was prepared to pervert the concept into its antithesis. Marx’s quip about ‘the dictatorship of the proletariat’(i.e. democracy) became the excuse for a totalitarian regime. He would not admit the impossibility of creating socialism in one country, especially one that had yet to experience the political consequences of capitalism. The other possibility, of course, is that once he had tasted power he could not give it up and his ‘socialism’served as a justification for this. There is little evidence that many understood slogans like ‘all power to the soviets’as having anything to do with socialism and, as we have seen, many who did think of themselves as socialist were reformists who did not believe in revolution. Yet again the slogans used were primarily expedients to manipulate those who could enable the elite’s rise to power.

The failure of the Bolshevik regime to produce anything remotely resembling socialism is testament to the Marxist understanding of how history proceeds. Without the potential for abundance and the class consciousness created by industrial capitalism, socialism is impossible. That so many of Europe’s intellectuals were seduced by Bolshevik propaganda underlines their idealism and the political danger inherent in the ignorance of historical materialism. To paraphrase Marx: ‘men create history but only within the limitations of their historical context’. To understand any political activity it is first necessary to comprehend the tectonics of economic evolution and the historical level of the class struggle it has enabled.

The historical reality of the English, French and Russian revolutions was the political consolidation of the transition from feudalism to capitalism which no superficial ideological differences can conceal. The subsequent history of these countries is entirely due to the economic and political logic of capitalism and has nothing to do with the ideals of Puritan Christianity, The Enlightenment, or Marxism. Socialism will not be ideological in so far as it will resolve the class struggle that has created the need for ideals within which class minorities struggle for intellectual and political supremacy. With its emphasis on reason and its rejection of faith Marxism has its roots within the European Enlightenment, but it is the antithesis of the idealism of Voltaire and Rousseau which, in the hands of Robespierre and Napoleon, became excuses for political authoritarianism –the true  essence of all bourgeois ideology. By understanding the class struggle socialists cannot be manipulated by ideology. Once they become the immense majority the revolution becomes inevitable as does the dissolution of all political parties, including the socialist party itself, after its conclusion. Lenin did not live to see the nemesis (Stalin, the gulags and starvation) that his hubris had helped to create for the Russian people. They still await their liberation. Let’s hope that it’s not another hundred years before this is accomplished, with their help, by a real global socialist revolution.