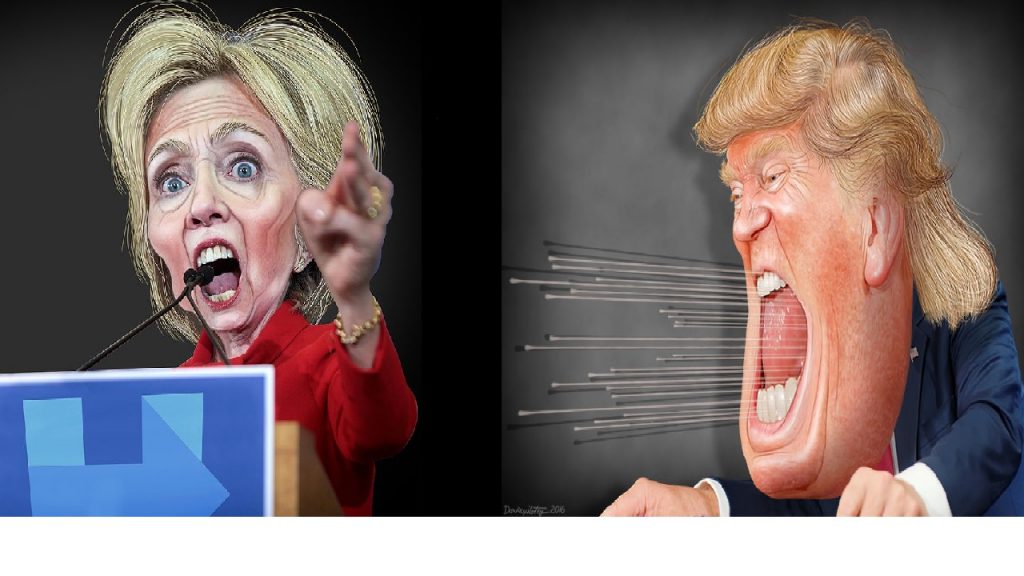 At the time of writing, the presidential campaign of Donald Trump is veering between tragedy and farce. His contempt for women, Mexicans, Muslims and all those outside his own white, male, billionaire peer group is twisting defiantly into an ugly parody, more grotesque than any fiction. Yet his screaming unelectability still carries tens of millions of Americans feeling sufficient affinity with his prejudices to continue supporting him. Meanwhile, Hillary Clinton, whose own hideous record of militarism and single-minded dedication to supporting the parasites of Wall Street in their exploitation of the 99 percent of the population who are excluded from their club might otherwise have been spotlighted, is allowed to pose alongside Trump as the humane alternative.

Have you ever heard any voter saying, in any election, in any country ever, what a hard time they were having choosing between the candidates because they were all so amazing, appealing and attractive in what their programmes and policies offered? Of course not. The uneasy and uncomfortable feeling which pervades much of the population prior to an election stems from just the opposite of that. Many people hesitate over which of the options to vote for, as they are struggling to select the ‘lesser evil’. This is because virtually all political candidates, world-wide, in all elections, are currently standing on a programme which is simply one or other variant of the ridiculous social system we already have. The ‘acceptable’ limits for change on offer have been pre-conditioned into a population which has absorbed the assumption that the fundamentals of current society are ultimately both normal and unchangeable.

It has become fashionable recently for social trends to be described on a per-second or per-day basis. A certain type of crime is recorded on average ‘once every two days’. A famous supermarket sells a Christmas hamper ‘once every three seconds’. But the most shocking and important revelation of this kind is rarely discussed. Across the world today, on average, a child dies of starvation roughly once every second. Even the most conservative of economists and agricultural experts have long conceded that the natural resources of the planet make that fact totally unnecessary. It is something caused one hundred percent by social, not natural causes. Even in the case of specific localised famines or natural disasters, it is purely a social and political barrier which prevents huge quantities of suitable food being simply flown in within the hour.

That barrier to bringing resources to where they are needed, whether houses for poorly housed Londoners, or food to starving children in less developed parts of the world, or life-saving operations to people currently forced to stare at their calendars and wonder if their place on the long waiting-list will arrive before they die anyway, that barrier is the same in all cases. It is that we currently live under a social regime in which all of the key social resources are owned, controlled and monopolised by a tiny minority of the population. Those multi-millionaire investors, or fund controllers, or state bureaucrats who are in that position of power over the world’s wealth, are caught in a battle with each other for expansion which creates an imperative that, whatever their wishes, they are compelled to increase their profits at all times regardless of the cost to human life.

The social machinery, of which this description is merely a cursory sketch, has evolved through the past several hundred years of global human history. However, social change and evolution has never and will never stand still. Those millions of people who find it hard to see any appeal in any of the political candidates on offer are in fact feeling a deep distaste for the socially insane system which all of those politicians, of every banner, represent and embody. Those millions of people who are not happy with this current social regime are surely the seed of huge social change, which may be unfolding in the coming months and years. It is in our very nature as human beings to be social, to use complex co-operation to solve our problems and meet our needs. John Donne wrote that ‘no man is an island’ in the 17th century and it is so much more evident today, when one product we enjoy has often been manufactured with components from several different continents and has involved input from any number of our fellow humans in its conception, design and delivery.

In the changes to come, those who have recognised this key significance of that conflict between the vast and relentlessly pursued profits of the one percent (or less) and the needs of the rest of us, can accelerate the arrival of a society which would meet the needs of all. The 99 percent whose lives are indirectly devoted to serving those investors and providing their riches whilst we struggle with various degrees of relative poverty, have a great weapon. Awareness, consciousness, self-education, mutual education in the realities of the current state of society can only lead to a final withdrawal of our consent to this social insanity. The political charade of which Trump versus Clinton was just the latest circus side-show masks the fact that the power of the few ultimately rests entirely on the acquiescence and support of the many. Their system noisily creaks towards Armageddon, with its rapidly worsening environmental crisis, of which climate change is a manifestation, its terrifying wars born of the power and profit struggles between rival power blocs, and its prosaic but tragic suffering of a million forms of poverty. Our only hope is to work relentlessly to build a movement which withdraws its support for that system in its entirety, which ceases to vote for any of its political figurehead gargoyles, and instead constructs a democratic political movement devoted to dispossessing that minority and using the world’s resources to meet the world’s needs.