50 Years Ago: Confusion on the Left 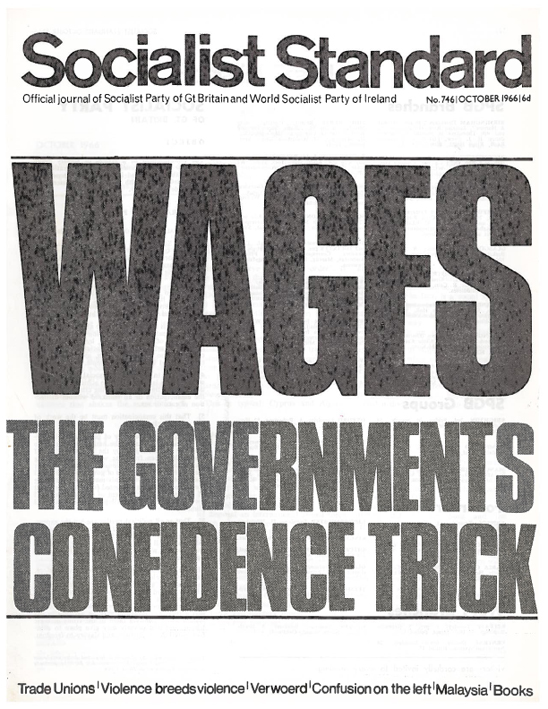 It is obvious that those trade union leaders who back the wages freeze are not acting in the interests of their members. But even those who oppose the freeze are hopelessly confused when it comes to politics. This was well shown at a meeting on September 1 organised by five of the unions opposing the freeze.

Not seeing Socialism as a practical alternative, the five general secretaries who spoke offered their own solution to the present financial problems of the British capitalist class: cut military spending overseas; impose import controls; launch a productivity campaign and end the status of sterling as a reserve currency. On this last point, loud applause followed a statement of the general secretary of the Association of Scientific Workers in which he said that they did not want ‘our’ currency being a commodity traded in by foreign bankers! Again, Clive Jenkins of ASSET commended De Gaulle’s policy of erecting a fence round France to prevent Americans buying up French industries. ‘I’d like to see the same here’, he said amidst applause.

This petty patriotism expressing itself as a dislike of international bankers (and America) is a characteristic of the Left, one which clearly distinguishes them from Socialists. Socialists know that patriotism is a delusion as workers have no country.

Jenkins’ main charge against the Labour government was that it was incompetent. Wilson was wrong, he said, in claiming to have been blown off course; he had steered right into the eye of a hurricane. ‘Had the government not heard of Keynes?’ he asked, suggesting that since Keynes any government that allowed unemployment to grow must be incompetent.

This is another myth of the Left. Governments fail to solve our troubles not because they are incompetent or insincere or irresolute but because they are trying to do the impossible. Our problems just cannot be solved within capitalism. The Left, with their so-called solutions, merely serve to keep alive the myth that capitalism can be made to work in our interests. That is why Socialists oppose them.