‘The Global Minotaur. America, Europe and the Future of the Global Economy’, by Yannis Varoufakis. Zed Books. 2015. 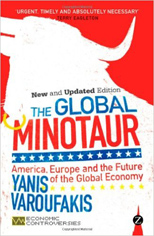 It will only be because the author later become Greek Finance Minister for a while that this book, that originally came out in 2011, has been republished (with a new introduction and an added chapter, plus a preface by Paul Mason). It’s an account and attempted explanation for the course of the world economy since the end of WW2 and up to the crash of 2008.

Varoufakis agrees with Marx’s basic analysis of how the capitalist economy works: that it is driven by capitalist corporations in pursuit of profit and that consumer demand and the demand for bank loans are dependent on this. Even though he places ‘financialization’ at the heart of modern capitalism, he doesn’t fall for the illusion that banks get their profits by creating money out of nothing but knows they do it by borrowing at one rate of interest and lending it at a higher rate, even the notorious CDOs and CDSs (don’t ask) that flourished in the run-up to the crash.

He also accepts Marx’s view that capitalist crises are cyclical and self-correcting in that slump conditions eventually create those for a recovery (e.g. by purging unprofitable firms) but, he adds, from time to time a big one with a capital C comes along from which, despite what Marx held, capitalism won’t spontaneously recover. 1929 was one. So, he says, was 2008.

His explanation for the crash of 2008 was the fatal wounding of what he calls ‘the Global Minotaur.’ The Minotaur was a monstrous half-man, half bull in Greek mythology which demanded that young men and women from the areas subject to Crete be sent to fight and be killed by it, reflecting as Yaroufakis points out the domination of the Greek-speaking world by Crete at one time.

The US – of course – is the new Crete and the Minotaur its financial system, based on the dollar being the currency in which other states and multinationals hold their reserves. This allows the US to run both a trade and a budget deficit. According to Varoufakis, this way of balancing world capital and trade flows broke down in 2008 and the world economy won’t recover until another one to replace it emerges. He favours what Keynes had proposed at the conference at Bretton Woods in 1945 to work out a new international payments system: ‘to create an International Currency Union (ICU), a single currency (which he even named the bancor) for the whole capitalist world.’

So, although he is a critic of some aspects of capitalism, he still thinks that it is in principle capable of reform to work in a different way from how it currently does. Since Keynes’s type of reform was not on the agenda, he must have felt in his discussions (when Greek Finance Minister) with his counterparts in the EU and Eurozone, that all they were discussing was tinkering with a broken system. It will be interesting to see what he writes about these in his memoirs which, judging by this book, should be readable and even amusing. 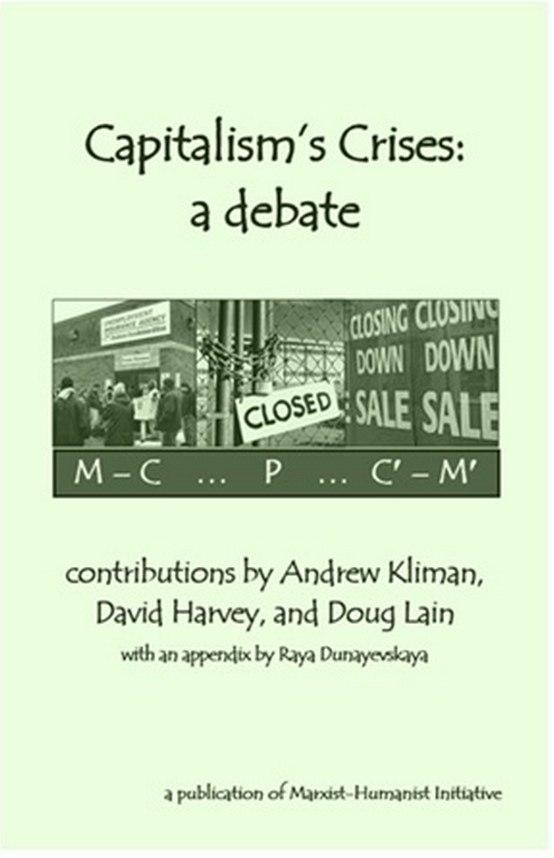 Andrew Kliman wins this debate hands down.  David Harvey has tried to argue that Marx didn’t really hold or didn’t stick to the theory of ‘the law of the tendency of the rate of profit to fall’.  He did suggest that, as labour is the only source of profit and as capital accumulation tended to be labour-saving, there was a tendency for the amount of profit to grow more slowly than the amount of capital invested. So Harvey’s view is easy enough to rebut. The real debate, which Harvey does not enter into, is how this tendency might be related to financial crises and economic downturns.

Some argue that there is a direct link between the falling rate of profit theory and crises, in that, as a result of the introduction of more and more labour-saving machinery over a period, the rate of profit eventually falls so low that there is no longer an incentive to invest so much and so there’s a slump in production.

Kliman’s argument is that the link is only indirect:

‘Marx did not regard the tendency of the rate of profit to fall as an immediate cause of commercial or financial crises. He argued that a decline in the rate of profit leads to a crisis indirectly and after some delay. It promotes overproduction (by, e.g., depressing productive investment demand). It also promotes financial speculation and swindling (…) it is only when debt finally cannot be repaid that a crisis – that is, a financial crisis – erupts, and the crisis then leads to stagnation’  [Kliman’s emphasis].

No such questions arise over the complementary view that during a slump the rate of profit rises through the devaluation of capital (capital is not a thing but a sum of values), so creating the condition for a resumption of capital accumulation. Kliman explains this well, underlining a very useful distinction between a financial crash (the actual ‘crisis’ point) and the drop in production that follows, useful because those in the Marxist tradition (including ourselves on occasion) sometimes use the word ‘crisis’ to cover both. 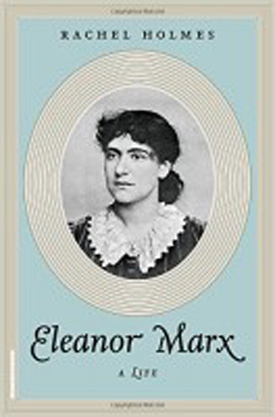 ‘Eleanor Marx changed the world,’ reads the first sentence of this biography’s preface. This is a grand claim to make and one which is not truly borne out. Its subject’s life is remarkable enough, without having to exaggerate.

Eleanor was born in 1855, the youngest by ten years of the three children of Jenny and Karl Marx who survived beyond childhood. Holmes gives a vivid description of the crowded, multilingual, literature-loving Marx household where she grew up. She had little formal education but learned a great deal from her father.

She was determined that her life not be taken over by pregnancy, childcare and household labours, with little opportunity for a career or committed political activism, as she had seen happen to her mother and sisters. She was indeed a dedicated and meticulous administrator and organiser in political groups and trade unions, such as the dockers and gas workers. She also taught basic literacy and numeracy to many union officials. In addition, Eleanor became her father’s secretary and research assistant, edited and published some of his works after his death (such as Value, Price and Profit), and was his first biographer. Many of her writings can be read online at www.marxists.org/archive/eleanor-marx/ .

One aspect of her rejection of prevailing values was her decision to live with a man who was already married, though separated from his wife. Unfortunately her partner was Edward Aveling: virtually everyone seems to have disliked him, and Holmes describes him as ‘an attractive, clever cad’. He had a series of affairs, was an inveterate conman and liar, and consistently strung Eleanor along with promises to marry her and start a family. She died in 1898, committing suicide after yet another betrayal by Aveling.

The nature of her political views can be seen in this extract from a speech made in the US in 1886, in which she advocated ‘abolishing all private property in land, machinery, factories, mines, railways etc.; in a word, in all means of production and distribution. But this is not abolishing private property; it means giving property to the thousands and millions who today have none.’ In 1884 she was a member of the executive council of the Social-Democratic Federation, but at the end of that year, with Aveling, William Morris and others, she founded the Socialist League, in opposition to HM Hyndman’s jingoism. The  League officially advocated working through parliament to achieve its aims, but Eleanor resigned in 1887, since it was subject to too much influence from anarchists. As she said in another speech in the US: ‘the socialist … believes in political action, in the seizure of political power by the working class as the only means of attaining that complete economic emancipation which is the final aim’. She was later reconciled with the SDF.

As for changing the world, this seems to mean essentially paving the way for others to fight for and win such matters as votes for women and the outlawing of child labour. Holmes describes Eleanor as ‘the foremother of socialist feminism’: she certainly opposed anti-women prejudice in trade unions, for instance, and double standards concerning men and women who lived together without being married (she felt she had to explain her decision to others, while Aveling did not).

This is a lively and well-researched biography; it is just a pity that some of the claims made are overblown, and quite unnecessarily so.