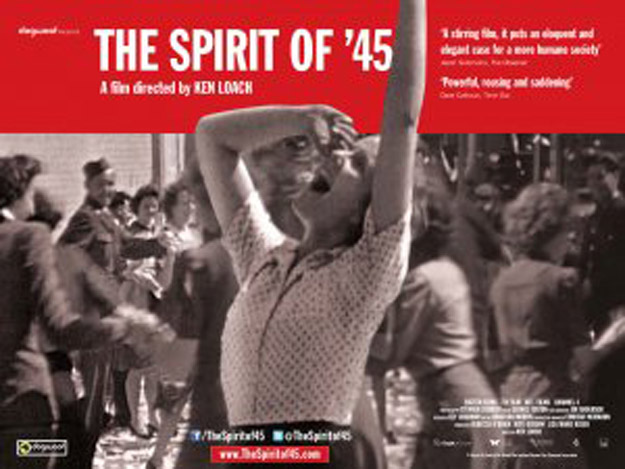 Spirit of ’45 directed by Ken Loach is an impressive but sentimental documentary about the Attlee Labour government of 1945-51 which is nostalgic for ‘Old Labour’ and the ‘cradle to grave’ welfare state. The use of Hubert Parry’s choral music to Jerusalem is an added touch of emotionalism.

Loach twice shows part of Attlee’s election victory speech at Westminster Central Hall when he says it is a ‘Labour movement with a Socialist policy’ and that ‘His Majesty the King has asked me to form a government.’ There is footage of Aneurin Bevan, architect of the NHS and the Housing Plan declaring ‘nothing but the best for the working class.’ The description of the 1951 Festival of Britain as a ‘celebration of working class heroes’ is hyperbole. All this gives the impression that the Attlee government was running capitalism in the interests of the working class which is absurd and impossible. In 1945 the working class firmly rejected Churchill (there is footage of the working class recalling Churchill sent the army into Tonypandy and killed striking miners in 1910). Churchill’s speech in June 1945 is important as it links Hayek’s eccentric paean to capitalist market libertarianism The Road to Serfdom, and today’s capitalist economic ideology: ‘there can be no doubt that socialism is inseparably interwoven with totalitarianism and the abject worship of the state.’

Loach looks at the nationalisation programme of the Attlee government particularly the railways and the mines. There is no socialist analysis identifying that ‘nationalisation’ is state capitalism (the wages system under new management), and the working class still have their surplus value robbed and need trade unions and the strike weapon in order to protect themselves from their employers.

The welfare state and the NHS are held up as beacons of enlightenment. The end of the commercial relationship between doctor and patient is trumpeted although private practice was allowed to continue, and some charges on the NHS were swiftly brought in soon after its creation when the capitalist state realised how expensive it all was. There was no socialist analysis in the film identifying the welfare state and NHS as essentially a ‘redistribution of poverty among the workers’, insuring the capitalist class against working class discontent and maintaining a sufficiently healthy and efficient working population. For the capitalist class the welfare state and the NHS meant increased profits and were seen as ‘a necessary expense of production.’

Loach looks at the 1947 National Dock Labour Scheme which ‘de-casualised’ dock work although no reference is made to the 1945 Dock Strike which was condemned by the Labour Government. Attlee even sent the army in. In 1989 the Thatcher government abolished the National Dock Labour Scheme thereby re-introducing casual labour. In the film there is talk of the ‘dignity and respect of work’ in capitalism which underlines the lack of socialist consciousness. Marx put it eloquently when he wrote ‘instead of the conservative motto a fair day’s wage for a fair day’s work, they ought to inscribe on their banners the revolutionary watchword Abolition of the Wages System.’

Sam Watts, an 87-year-old working class Liverpudlian makes some accurate and pithy statements towards the end of the film such as ‘the profit system is rotten and corrupt and the quicker it goes the better’ and ‘the working class can change the whole of history but it has not grasped that it has this power.’

Spirit of 45 is about taking ‘the crumbs off the Master’s table’ when what the working class need to do is demand the whole loaf, take over the bakery and have common ownership of the wheat field.