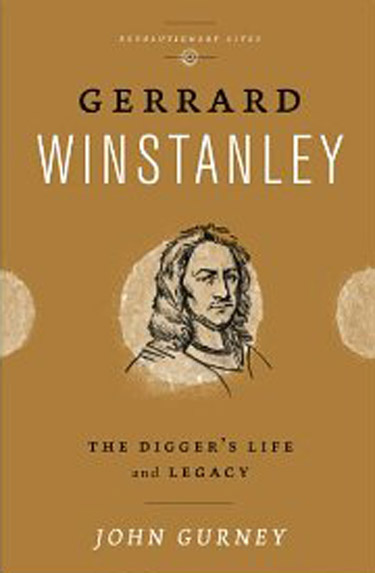 This is an excellent new book providing a brief history of the life and times of Gerard Winstanley, the seventeenth century utopian communist. Enough historical context and biographical detail is provided to get to grips with the subject without becoming too immersed in academic debates and a sense is given of the contested nature of Winstanley’s legacy.

One of the points raised by Gurney is that Winstanley was virtually unheard of for over two centuries after his digger writings. British political radicalism up to the latter half of the nineteenth century emphasized the contribution of the Levellers and the defender of parliament against the crown, John Hampden, to political democracy. Winstanley’s legacy was mainly focused on his possible contribution to Quakerism. This all changed, however, with the rise of Marxian revolutionary socialism which led to an interest in Winstanley’s communism and his rise from historical obscurity. It was the German social democrat, Eduard Bernstein who, in 1895, revived Winstanley’s reputation as an early proponent of ‘communistic utopia’ in his Cromwell and Communism.

Today the situation is somewhat reversed and Winstanley is probably the most celebrated radical figure of the English Civil War period. In fact, he is probably emphasised beyond his historical importance – the subject of numerous academic studies and celebrated as a ‘forerunner’ of socialism, anarchism, libertarianism and back-to-the-land activism.  Winstanley’s legacy is disputed ground but he cannot with any seriousness be regarded as an early proponent of any of these later social movements. Winstanley responded to the world around him with the intellectual tools available to him. He suffered financial misfortune during the turmoil of the Civil War and his angst was expressed through visionary, millenarian, religious mysticism. The social function of religion was fiercely criticized and future salvation rejected in favour of a religion of conduct on earth. Reason, for Winstanley, was synonymous with God and covetousness, competition and false dealing resulted from private property and money. The solution he proffered was a social transformation based on the abolition of private property and money and their replacement with common ownership and working in common. Remaining a mystic, social and political experience led him to a materialist conclusion cloaked in religious language – material equality would not come from spiritual enlightenment but precisely the reverse; true religion could only emerge from material equality on earth. After the Civil War period Winstanley withdrew from activism and became a settled and respected local landowner, tradesman and Quaker.

One of his most repeated quotes is: ‘Words and writings were all nothing, and must die, for action is the life of all, and if thou dost not act, thou dost nothing.’ Ironically his actions came to nothing and it is his words and writings that have survived for posterity. His practical efforts, which involved cultivating common land with fellow Diggers near Cobham in Surrey, failed to attract support. Instead of sympathy, the Diggers faced extreme opposition and violence from the local population on two fronts. First, they were attacked several times whilst at a site on St. George’s Hill by locals who used the common to graze cattle and sheep.  Second, when they had moved closer to Cobham, they were attacked by the lackeys of the local gentry and they were again subject to violence, including the destruction of houses built by the Diggers. They were forced after just over a year of strenuous effort in the face of vitriolic hostility to give up their practical activity. Their plight is summed up by another of Winstanley’s oft-quoted writings: ‘For freedom is the man that will turn the world upside downe; therefore no wonder he hath enemies…’

It is possible to see in Winstanley’s writings the rudiments of the Marxian concepts of alienation and the labour theory of value. This is, though, to see him through the lens of future developments. He was not a forerunner of Marxian socialism but the turbulence of the English Revolution did lead him to lay down writings which offered up a communistic utopia as the solution to the social and economic challenges he faced.  The historical turn away from celebrating constitutional political radicalism and towards Winstanley’s communism is interesting and positive. Unfortunately many of the most vocal celebrants of Winstanley, such as The Land is Ours and other land reformers, do not do justice to the depth of the ambition of his communism. A recent interesting development is an annual Digger’s festival in Wigan (Winstanley’s birthplace). This year is the third such event, to be held on 7th September (wigandiggersfestival.org). 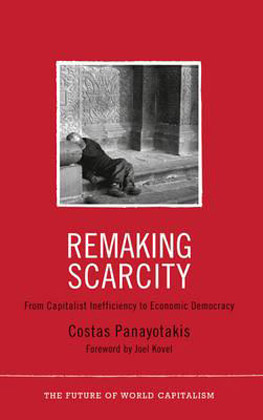 Economics, as taught in schools and colleges, defines itself as the study of the allocation of limited resources amongst competing wants where these are greater than resources and teaches that markets and prices arose as the best way to do this. In fact, since it assumes that human wants are infinite, it teaches that scarcity – and markets and prices – will always exist.

Panayotakis rejects the traditional socialist argument that ‘scarcity has been conquered’ because ‘the problem of production has been solved.’ He sees scarcity as a fact but argues that free market capitalism is not the most efficient way to deal with it. Naturally, he has no difficulty in showing that capitalism does not allocate resources efficiently to meet human needs.

This, he points out, is due to the fact that ‘the true goal of capitalist economies is not to satisfy the wants of consumers, but to pursue profit and a never-ending accumulation of capital.’ This ‘logic of capital accumulation escapes people’s control and subordinates them to its imperatives,’ including even the owners and top executives of capitalist firms:

‘… the pressure of capitalist competition means that, even to preserve their capital and continue enjoying the privileges, prestige and power associated with their class position, capitalists must tirelessly pursue profit and capital accumulation.’

This makes them essentially ‘functionaries of capital,’ who don’t have a free hand to do what they might want, but only a greater power than the rest of society ‘to influence the terms under which they and all other socio-economic groups are subordinated to the logic of capital.’ So far, so good.

Panayotakis’s thesis is that capitalism fails to deal with the problem of scarcity efficiently because it is an economic oligarchy. The alternative to capitalism is, then, an ‘economic democracy’ where everybody would have an equal say in how scarce resources are used. He recognises that this implies that the means of production should no longer be owned and controlled by a minority but seems to favour particular productive units being run by workers’ co-operatives or councils.

The two models of ‘economic democracy’ he discusses in detail are so-called ‘market socialism’ (as in David Schweickart’s proposal) and Michael Albert’s ‘Parecon.’ He can see the drawbacks of retaining production for the market, but doesn’t make the point that, with market competition, workers’ co-operatives too would be forced to behave as ‘functionaries of capital’ if they wanted to survive.

He is more favourable to ‘Parecon’ but mentions one critic’s description of it as an ‘off the shelf utopia.’ As indeed it is, though ‘off the wall’ might be a better description given its endless form-filling and voting to try to fix prices and pay that conform to some ideal allocation of scarce resources.

Panayotakis and the others have got themselves into this position of discussing how to calculate prices and pay because they reject the traditional socialist view that, given the abolition of capitalism, enough to satisfy people’s needs could be produced and that therefore a socialist society would not have to price or ration goods but could implement the principle of ‘from each according to their ability, to each according to their needs’.