An Open Letter to The Chairman of the Bank of England 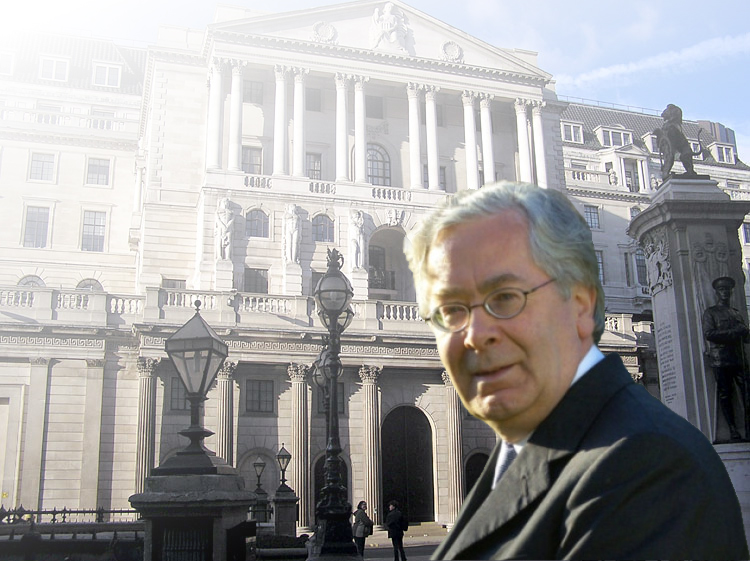 Having heard on the BBC news channel on the evening of the 29th June your condemnations and exhortations concerning the practices of your fellow-bankers I am taking the liberty of writing to you to register my surprise at your remarks. It is not my purpose to be offensive but I find it difficult to accept that a man of your knowledge and experience can view the current crisis of capitalism in moral terms or, indeed, as aberrational.

I am an eighty-seven year old man and a great-grandfather which gives me a particular concern for the future. I was born four years before the awful world economic slump of 1929 and I have lived through some eight or nine ‘recessions’ –as they are euphemistically referred to today. I have witnessed life under the system of capitalism when it was largely unregulated –capitalists had discovered earlier that they required some sort of Queensbury Rules to protect themselves from one another.

Post-1945, when government adopted the war-time National government’s commitment to the Beveridge Report, I experienced Maynard Keynes’ antidote to the caprice of the system, via ‘demand management’: the exchange of bonds for shares and –in recognition that working-class poverty was an endemic feature of capitalism – the institution of a complex scheme of nationalised poverty.

It would be churlish to deny that there was some improvement in social conditions for the producing class: improvement, it has to be said, greatly assisted by the need to make good the awful destruction of the late world war –while frenetically preparing for yet another possible war against our late ‘glorious Russian allies’ and their Leninist philosophy of trying (vainly, as it turned out) to rationalise commodity production through central state planning.

While knowledge was constrained by the cash nexus, science in all fields of human endeavour has brought about a geometrical increase in our potential to create the material conditions of a full and happy life for every human being on the planet. Unfortunately much of our fantastically expanded wisdom and wealth has been siphoned into military establishments which are today a vital indigenous segment of the world economy; a segment which often manifests an independent and dangerous threat to human freedom.

The world of my lifetime has seen the economic murder of some eight billion people through starvation, lack of clean water and necessary medication. The food and medication to keep these people alive was available but the men, women and children concerned did not represent a viable market that would yield profit. They died because they were poor.

In the same period I have seen World War Two –the awful sequel to World War One –that brought homes onto battlefields. Now, since the end of WW2, there is at least one major conflict occurring every single day. In fact, the industrialised killing of human beings that arises from the endemic conflicts of capitalism has itself created investment opportunities effectively making international concord a serious economic threat.

It is surely legitimate, Sir Mervyn, to ask such as your good self how you think people in what we hope will be a more enlightened future will see the current phase of what we are told is civilisation. How, for example, would a future economic historian see the current Sunday Times ‘Rich List’ which shows that the wealth of the one thousand richest people in the UK –a mere 0.003% of the adult population –increased by an incredible £155 billion over the last three years? This in a period when wages and social security benefits were, and are, being slashed and the vision and disagreements of the three political parties, marketing the same political product, is confined to the duration, in years, the working class will have to endure the appalling increase in its miseries.

Moral aphorisms appealing to those who have purloined the means whereby the rest of us live have never restrained the appetites of an owning class. It is said that Jesus got his comeuppance for suggesting the meek –by definition, the poor –should inherit the land. Centuries later, in the dying years of the nineteenth century, when Pope Leo mildly admonished the capitalism of his day, opining that “…the wages of the working man ought not be insufficient to support a frugal and well-conducted wage-earner…” (Encyclical: Rerum Novarum. May 1891) public criticism was raised by Italian businessmen who suggested that the promulgation of the document might cause social unrest.

Poverty and riches are two sides of the same coin –almost literally so, for as Shelley put it, “Paper coin, [is] that forgery of the title deeds which we hold to something of the worth of the inheritance of earth”. You cannot be ignorant of the mechanism by which a small minority class dispossesses the creators of all real wealth of the fruits of their labour and rations their access to their needs through a wages-money system.

Whatever the form of society, real wealth is produced, and can only be produced, by the application of human labour power to nature-given materials. Capitalism adds a third element to this simple equation: investment on foot of the promise of profit. The shareholder, whether s/he is a billionaire or a plumber in a pension scheme, seeks a return on their investment and is rarely persuaded by the needs of ‘the nation’ or their perception of morality. Only the threat in the aforesaid ‘Queensberry Rules’ of the system curbs the pecuniary enthusiasm of the more predatory captains of capital and that, as we are currently learning, is not always the case.

The labour power that provided the fervid productive activity of, say six years ago, when the system was in relative ‘boom’, is still available as are the natural resources of that period. The missing element is capital; effectively, capital is on strike, holding the nation up to ransom as the pensioned editors of their newspapers proclaim when some group of low-paid workers withdraws their labour. Surely the fact that a small minority of satiated money shufflers can visit such overwhelming hardship on the populace in general (as it does periodically) must bring the entire system into question.

Whatever of the past, when the owner of the local factory lived in the big house on the periphery of the town or village and occasionally visited the local hostelry and even bought the lads a pint, capitalism today is a curse on the lives of the world’s billions. Technology has given it a mobility to seek the cheapest labour, circumvent health and safety standards that might impinge on profits or capital on-costs and to force the hand of allegedly democratic authority.

The implications in the current crop of chastisements against bankers and those of their ilk is that capitalism is an efficient, humane economic system that offers the human family the best of all possible worlds except when, as now, it falls victim to the ineptitude or greed of some of its functionaries. That is a lie told in defence of the system. Of course there has been abuse, and even absurdity, in the administration of banks and businesses but it was the uncontrollable greed that fuels the system that gave rise to the activities of bankers and speculators. Nor should we forget that it was the approbation of millionaire and billionaire shareholders that justified the fabulous salaries and bonuses so lately enjoyed by now-discredited servants of capital.

The widespread clarion for a public enquiry might expose some of the greedy swindlers whose dishonest activities have added misery to capitalism’s cyclic trade crisis as well as the self-interested manoeuvrings of politicians in all the three main parties. For a while these scoundrels might suffer in comfort the embarrassment of being publicly pilloried. But the system itself, the vile, anachronistic system that brings dire poverty or mere want to most of the people on the planet, will be off the hook.

What we will not have is an incisive enquiry into the question of capitalism’s suitability for purpose and whether socialism, in a clearly defined sense, offers a better way of life for the whole of humanity. That would be much too democratic.

Such are my thoughts. I confess, Sir Mervyn, that I am a ridiculous optimist who thinks human concern and human honesty might occasionally rise superior to the exigencies of office. Additionally, of course, in submitting this to the Editors of the Socialist Standard, I would stipulate that publication guarantees your right of reply.