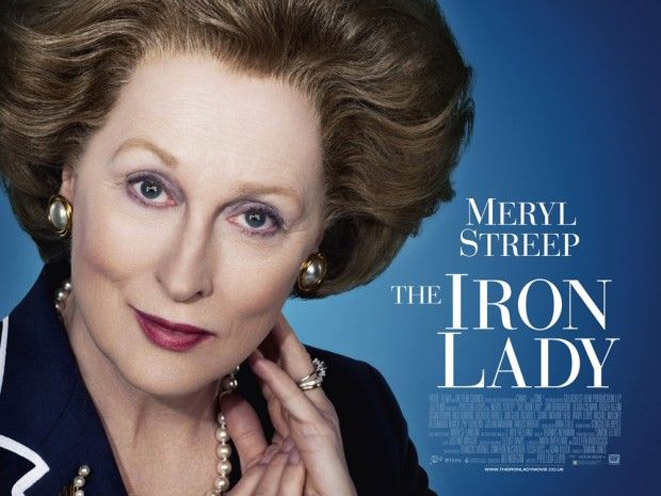 The film The Iron Lady is a paean to a personality rather than a political documentary, and must be judged as such. The personal is political, however, and therefore anyone who lived through what happened in Britain in the 1980s will have some reaction to the politics of this film. Meryl Streep’s acting, as ever, is extraordinary and this is by far the most remarkable thing about this film. Most of the action effectively takes place inside Thatcher’s head, as her senile dementia filters a mish-mash of memories, regrets, resentments and pride over the course of her career. This allows the film some poetic license in its random and one-sided presentation of historical events. This device enables, as it were, a multitude of sins, as we are allowed only the most cursory of glances into the dogmatic arrogance of her rule or the huge suffering and destruction of life which her governments both oversaw and caused.

We are invited to share in her principled stand that, “we must never give in to terrorists” without even so much as a clue that she was simultaneously financing and sponsoring terror on a vast scale through her support of foreign dictatorships and the sales of arms (which, on a smaller scale, her beloved son Mark was to become thoroughly embroiled in). We are shown in some detail how she had to brave the entrenched male chauvinism of the Conservative Party to be selected as a candidate (and that of the Labour front bench once she arrived in parliament) but are given no clue of the utter contempt she held for the miners’ wives who bravely struggled against the violent attack she unleashed on them, their husbands and children and the whole communities that were destroyed by her calculating policies in defence of the profits of the already powerful and privileged. (Regarding the otherwise very realistically filmed scenes in parliament, was there really not a single other woman MP in the country throughout the 70s and 80s?)

There is a nice motif running through the film of her struggling to pack away the extensive wardrobe of her recently deceased husband, which apart from being used to explore and amplify her love for him, also perhaps serves to accentuate how she had to brush away the extraordinary male dominance which had marked the Palace of Westminster until then. Not that any great change was sustained even in those regards, however, as today’s few hundred political representatives are still overwhelmingly male as well as overwhelmingly white, public school, Oxford and Cambridge and wealthy (not that this makes any significant difference to the operation of capitalism anyhow).

There is an interesting turning-point half-way through the film, when the rising score and deftly stylised camera work accentuate her supposed moment of epiphany, that she has been “chosen” to lead the movement to end the consensus politics which had prevailed since the Second World War, and embark on her supposedly inspired battle against conciliation. This, and other moments such as the laughably over-played scene where she finally leaves Downing Street for the last time (This gets the fully absurd Hollywood treatment, with hundreds of red roses along the marble floor she treads, and her entire household staff of several dozen servants all in floods of tears!) are the film’s greatest indulgences, which perhaps take inspiration from the fiasco of Evita with its focus on the supposedly moving love of “the masses” for their vicious dictators.

The artful and manipulative direction here tries to uphold The Iron Lady as a hugely sympathetic portrait of a woman whom any intelligent political analysis can easily demonstrate to have benefited the super-rich and supervised widespread and often intense suffering for millions of people who were already deprived and became more so. As for the increasing groundswell of anger and resentment, fury and resistance amongst those millions – that was conflated into a few seconds here and there in which an amorphous and animalistic crowd screamed and punched at her as she sat looking dignified and patient like Joan of Arc inside her Bentley.

She is shown as simply reacting to the nuisance of trade union solidarity and the atrocities of the IRA (both the killing of her friend Airey Neave and the bombing of the Brighton Grand are given prominent and fairly graphic attention), rather than having initiated conflict by, for example, waging war on organised labour or benefits claimants. We see her order the attack on the Belgrano, which killed 300 Argentinean conscripts, but those deaths are quickly skated over as we are encouraged to dwell, like her, only on the English volunteers who died in the revenge attack. In short, The Iron Lady portrays Margaret Thatcher on the whole as compassionate, principled and patriotic rather than as a pious, arrogant and dogmatic warrior for the wealthy, who not only scoffed at ideas of social conscience or solidarity but even denied the existence of “society” itself.
CLIFFORD SLAPPER