Tony Blair and the Chilcot inquiry 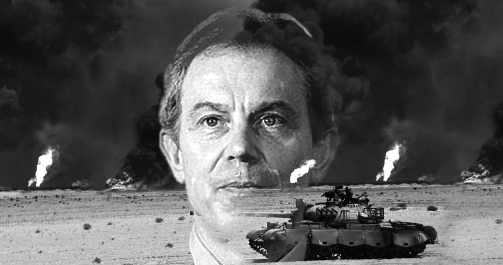 Does it matter whether the Iraq War was legal or illegal?


Socialists are opposed to war because under capitalism wars are always about capitalist access to sources of raw materials, markets, trade routes, investment outlets or strategic points and places to control these. The Iraq War was clearly about oil, mainly about the threat that the regime there posed to oil supplies to Western capitalism from the nearby Gulf States but also about establishing military bases there to control access to Caspian Sea as well as Gulf oil.

So it was a capitalist war but was it an ‘illegal’ war? The concept of an illegal war only came in following the defeat of Germany and Japan in the Second World War when it was applied retrospectively to the leaders of the losing side and incorporated into the UN Charter. Before that, states simply went to war whenever some vital capitalist interest was deemed to be at stake.

The UN Charter outlaws all wars unless authorised by its Security Council except wars of self-defence including coming to the defence of an attacked state. Thus the Korean War was a ‘legal’ war because decided by the Security Council. America declared the Vietnam War legal under the self-defence clause. In fact, the US doesn’t really care what the UN Charter says and, as now by far the strongest military power in the world, doesn’t need to.

On Iraq, the US government had decided to invade and topple Saddam whatever the other members of the UN Security might think, putting its allies under pressure to decide whether or not to join in this. The evidence to the Chilcot inquiry has revealed that Blair said in effect to Bush “Britain will go along with whatever America decides”.

As the Prime Minister of a Labour government Blair couldn’t take the same cavalier attitude to the UN as the Bush administration. After all, the Labour Party had long posed as the champion of the UN. So, once the decision to wage war on Iraq together with America had been taken, the search for a ‘legal’ basis in international law had to go on alongside the military preparations.

The government’s lawyers advised that “regime change” would not be legal as the UN Charter didn’t allow this as a reason to go to war (not surprisingly as there are so many unsavoury regimes represented there). That left Iraq’s apparent refusal to abide by a previous UN Resolution instructing it to dismantle its weapons of mass destruction. The government’s spin-doctors played this for all it was worth The media went along with this, publishing a map of the Eastern Mediterranean showing the British military base in Cyprus within range of the WMDs Iraq was supposed to possess (just in case the ‘self-defence’ clause  might have to be invoked). It later turned out of course that no such weapons existed.

Faced with Blair’s determination and the ongoing military preparations for invasion, the poor Attorney General had no alternative but to come up with some legal basis, however flimsy. And he duly did (apparently a previous UN Security Council Resolution allowed any State that fancied it to invade Iraq). Blair then used this to get agreement to the war through his Cabinet (only former Foreign Secretary Robin Cook resigned) and Parliament (only 149 voted against, with 412, Tories as well as Labourites, with blood on their hands) in time to fit in with the US military‘s timetable.. And the war was on.

The whole business of finding a legal basis was a charade. The UN Charter is just a scrap of paper which has never stopped, and never will stop, any war. Its only effect has been to make governments that want to go to war find some loophole somewhere to wage a war they had decided on anyway.

Another interesting, and perhaps surprising, revelation of the Chilcot inquiry has been that the demand for legal cover came not just from those who believed in the illusion of an “ethical” foreign policy, but also from the chiefs of the armed forces. It was unlikely that they were afraid of ending up before a war crimes tribunal as the war was won before it even started. What it showed was that they had qualms about setting the killing machine in motion illegally, so confirming that in Britain the military is subordinate to the civilian government.

Blair’s miscalculation was to lead Britain into a war that had very little popular support. He is on record as justifying this on the grounds that leaders must lead by sometimes taking unpopular decisions. It is quite true that governments must do this. This is because they are governing a class-divided society on behalf of one of the classes – the capitalist class – which often requires them to take action against the interest of the other class – the majority wage and salary working class. Wage restraint is one. Going to war is another.