The late Nineteenth Century witnessed the rise of Irrationalism. Philosophers rebelled against what they saw as the rigidities of positivist determinism and retreated into subjective idealism. Henri Bergson personified this movement; Hans Vaihinger’s book, The Philosophy of As If, reflected its Humpty-Dumpty logic: the world, according to this book, might be anything that one imagines it to be; one scientific hypothesis is just as good as any other. This rebellion against the scientific outlook of the Enlightenment culminated in more than an academic fad. The Fascists and Nazis of the 1930s rejoiced in their contempt for rational explanations. It was a crude contempt: books were burned; scientists who failed to conform to the mythology of the tyrant state were dismissed from their posts; to be an honest scientist became a reason for exile. It is a lesson of this century’s madness that we forget at our extreme cost.

These days the scientific outlook is again being exiled, perhaps more by economic than political pressures. Increasingly, scientists are required to prostitute themselves to the commercial activities of germ warfare, genetically adulterated foods and apologism for ecological vandalism. Theoretical science has been slowly driven from the universities by the new crusaders of Postmodernism. But to call them crusaders is to attribute an energy to a listless and intellectually indolent movement of academics who, far from advocating something, are mainly concerned to deride commitment to anything. At their most risible the “philosophers” of the new Irrationalism are transparently bogus producers of mumbo-jumbo, able to convince only the dumbest of Americans of their wisdom by pronouncing their follies in strong French accents, using made-up words. Derrida’s book on Marx was the epitome of such utter nonsense.

It is high time that the fakes were exposed. Sokal and Bricmont’s Intellectual Impostures is a work of meticulous, relentless destruction of the charlatanism of postmodernist writers who have sought to pepper their ramblings with pseudo-scientific formulae. Sokal and Bricmont are physicists and materialists. With detailed references to the works of writers ranging from Lacan and Kristeva to Latour and Baudrillard they demonstrate the ways in which these theorists have used scientific language—specifically, mathematics—without understanding it. Indeed, in several cases they may not have read the works they cite. This is in keeping with the postmodern outlook, which holds in contempt a relationship between the text and its meaning. Althusser, an earlier prophet of the nouveaux charlatans, wrote a book telling people how to read Marx’s Capital; writing years later, after being certified as a lunatic, he confessed that he had not actually read much of Marx.

Sokal and Bricmont’s impressive volume needs to be read to be appreciated. It is a valuable work of scholarship—for, sometimes the task of scholars is to expose intellectual sloppiness and fraud. There is a particularly stimulating chapter on the relationship between so-called postmodernism (a hopelessly ill-defined term) and chaos theory. There is scope, perhaps, for future writers to produce a book explaining the connection between chaos theory and the economic anarchy of late twentieth-century capitalism.

The best books on postmodernism so far have been David Harvie’s The Condition of Postmodernity and Terry Eagleton’s Postmodernism. This is a welcome addition to the literature in defence of the materialist conception in the face of the anti-humanist philistinism of our age.
SC

An Introductory Guide to Post-Structuralism and Post-Postmodernism by Madan Sarup. Manchester, Wheatsheaf.

The postmodernist view is that grand “narratives” like Marxism have failed and are no longer an adequate way of looking at or making sense of the world. That what is more relevant is to break down the big picture (the grand narrative) into a series of smaller, discrete pictures (little narratives); to deconstruct and de-layer the “whole structure” and thereby find out how meaning is put together. One can liken this to a puzzle which is purposely made up of a number of individual pieces that assembled together make a whole picture. It is from the whole picture that we usually make sense of the individual isolated parts. When put together (connected) a meaningful picture is formed.

Amongst some postmodernists the view is that in the deconstructed puzzle each individual piece, or each random construction of smaller pieces of the puzzle occupy a philosophical terrain of their own, have meanings that can be construed without recourse to the bigger picture. If this is so we arrive at a place where the grand narrative is at an end and all that is left is “playing with the pieces” (Jean Baudrillard). This appears unduly pessimistic and without hope of a way forward. Fortunately there are people like Madan Sarup on the scene to counter this view.

Madan Sarup makes some interesting comments in his introduction. He says that “the controversy over postmodernism is one example of class struggle at the cultural and political level. On the political level postmodernism is an attack on Marxism . . . about the validity of Marxism and its belief in progress” as many postmodernists declare that progress is a myth. He goes on to state that the “project of modernity (which postmodernists attack) is one with that of the Enlightenment and that Marxism is a child of the Enlightenment”.

In a passage that comments on the Marxist position, he states that, “a characteristic of human beings is that they make a distinction between the ‘real’ and the ‘ideal'”. By the real he means an awareness of the present situation, and by the ideal, some notion of what life, the world, could be like. Human beings, he continues, “have a sense of what is possible in the future and they have the hope that tomorrow will be better than today. Marxists not only have this hope, this orientation towards the future, but they try to understand the world, to develop a critical consciousness of it, and try to develop strategies for changing it. Of course, they realise that progress is uneven, not unilinear; because of the nature of contradiction there are inevitably negative aspects, sad reversals and painful losses. Marxists struggle for a better future for all, but they know that this does not mean that progress is guaranteed or that the process of the dialectic will lead to the Perfect”. He believes that it is important for people to support the Enlightenment project because education is closely connected with the notion of a change of consciousness and that gaining a wider, deeper understanding of the world represents a change for the better. And this, in turn, implies some belief in a worthwhile future—something the postmodernists seem sceptical about.
KEVIN PARKIN 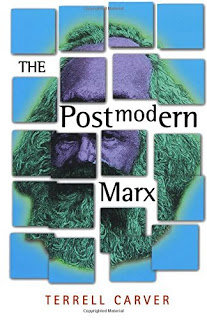 Carver, Professor of Political Theory at the University of Bristol, wants us to take seriously the techniques of textual and narrative analysis within what he calls “a mild form of postmodernism”. By treating Marx’s work as an open text, with “multiple Marxes” and no authoritative version of Marx or Marxism, this is said to encourage further critical engagement between the reader and Marx. Above all, the chief concern is to avoid dogmatic “closure” in terms of what to think about Marx.

We in the Socialist Party have some disagreements with Marx, but more often than not, just very different interpretations of Marx than the usual academic interpretations and total opposition to the regimes around the world which claim to be Marxist. To our critics (on the left especially) this position is sometimes portrayed as idiosyncratic. Yet Carver and our critics oversimplify: between Carver’s almost anything goes and the dogma of the leader-fixated Left the Socialist Party has to work for consensus in a democratic, leaderless organisation with a shared socialist objective. In the Socialist Party each member has to come to terms with what Marx said, but any implementation depends on democratic agreement being reached.

Controversially, Carver argues that Marx was a philosophical idealist (the view that concepts construct or determine reality) and subscribed to methodological individualism (the analysis and explanation of the actions of socially constructed individuals). He is factually incorrect in saying socialism is a stage between capitalism and communism; Marx simply did not make that distinction. However, Carter is quite clear that the former “Marxist” dictatorships of Eastern Europe had no claim on Marx “because they never abolished money nor even attempted to secure any genuine break, voluntary or otherwise, with the history of commodification” and if the advocates of “market socialism [sic] intend to accept the monetary economy, however cooperativised and democratised, then they had better come clean as social democrats and welfare liberals” and not as socialists. Because: “if we have money, we have to deal with the characteristic dynamics of capitalist or so-called market societies, and socialist ideals are necessarily incompatible with this.” This is so very true, but it does rather contradict the whole point of this book.

Incidentally, Carver recounts an acquaintance between Andrew Johnson, a translator of art books, and Marx. In October 1852 Marx wrote to Engels: “If you have to write to me on important matters, do it under the address: A. Johnson, Esq., Bullion Office, Bank of England.” What a wonderful (postmodernist?) irony that Marx should want to use the Bank of England as a postal drop.
LEW