Observations: Santa on the spot 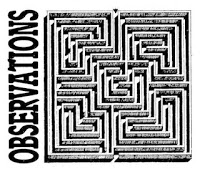 Playing Santa Claus can be an extremely disagreeable way of contributing to a Christmas party. It’s not just that all those robes and false whiskers make you feel like the pudding in the steamer, nor the physical assaults which must be uncomplainingly absorbed from impatient, disappointed or inquisitive children. There’s also the fact that you’re being set up to work a deception on people who, by their age, are assumed to be nicely vulnerable to it.

Whatever the hazards faced by the amateur Santa Claus they are as nothing compared to those of the professionals, those derelict actors who seem ready to take almost any risk for the sake of a bit of work in the Christmas spending spree. This year it promises to be even worse; if there are any Santas getting job satisfaction by resisting the idea that Christmas is a vast festival of commerce, 1986 should make them change their minds.

The pressure is on, in all the big stores, for the jolly Santas to turn in higher sales figures and some decidedly unromantic methods are being used in the process. Harrods, where Santa has always wandered freely about the toy department chatting with the kids, are now confining him to his enchanted castle because, the store say, the old method was too random to ensnare all the possible children. Hamleys, where they have never had a Santa before, now have three of them working shifts in a magic forest where the time and motion people roam among the clockwork animals. Each child is allocated 25 seconds to state their dearest Christmas wishes and the Christmas sport of mishearing the child’s name, traditional but time-consuming, has been eliminated through a system of name cards.

It is worse outside London. In Glasgow and Manchester Santa had to bid perilously for publicity by shinning up a 100-foot ladder, amid exploding fireworks, onto the roof of the store. In Chester he was winched up to a high window by the fire brigade. For all this, of course, youth and fitness are needed; Santa, like so many other jobs, is no longer for the older man.

None of this is calculated to bring a magic sparkle to a child’s eyes, but to enliven the sales figures. Selfridges are planning to process a quarter of a million children through Santa’s grotto this year — a quarter of a million spenders, that is. Maximising customers, to use the stores’ jargon, means maximising profits, which is a nice seasonal present for the shareholders.

It gives a new meaning to the old saying about Christmas being for the children.

The recent de-regulation of buses is absurd even by the warped standards of capitalism It is the latest outcome of the Tory Party’s central economic tenet: “If it’s profitable then privatise it”. The result: total chaos in many towns and cities outside London as hundreds of private bus operators compete for a limited number of profitable routes; inner city streets in towns like Glasgow congested with hundreds of almost empty buses looking for passengers, while on the outskirts of the city and in rural areas people stand at bus stops waiting for buses that no longer run. paying the price for living on “uneconomic” routes.

The reason why utilities and services like transport, gas. electricity and water were nationalised in the first place was because it was recognised that it was more efficient and cost-effective for the state to run certain essential services than private capitalists. But it looks as if the Tory obsession with privatisation now means that that lesson must be learned all over again. In the meantime it’s workers who will suffer as a result of the chaos — capitalists may run bus companies, but they certainly don’t have to travel by bus.

In the nineteenth century the Poor Law made a distinction between the “deserving” and “undeserving” poor. The “deserving” poor, people like widows and the long term sick or disabled, were granted Poor Law relief: the “undeserving”, especially the able-bodied unemployed, were subjected to the workhouse test to see if they were really desperate or just shiftless scroungers. The idea was that only the really desperate who had no other alternative would put up with the brutally punitive regime of the workhouse.

That same mentality has always been present in the modern system of welfare benefits (hence the different benefit rates for unemployed and other claimants). So the government’s latest “available for work” test is just the last in a long line of methods for sorting the “deserving” from the “scroungers” (with the added bonus of bringing down the embarrassingly high unemployment figures before the next election).

The unemployed are to be required to fill in a new questionnaire when they claim benefit to enable (according to Lord Young) “a proper assessment to be made of a person’s entitlement to benefit”. The claimant will be asked a series of trick questions: if they give the wrong answer then they are likely to have their benefit suspended. Questions like:

Although the government has dismissed claims that they are merely trying to fiddle the unemployment figures Kenneth Clarke. Paymaster General, said that if the new scheme reduced the number of claims allowed by less than two per cent then it would pay for itself, including the £14 million cost of employing 1,400 extra benefit staff. A senior civil servant wrote a letter to all regional benefit managers saying: “We may be able to deter two to four per cent of fresh claimants who are not serious about looking for work and disallow another two to three per cent who are not available”.