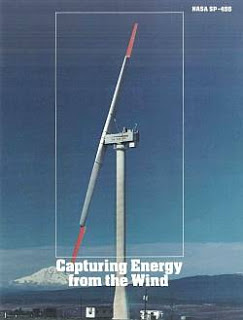 Generating energy from the wind is an old proven technique which became obsolete as capitalism developed. Now in an updated form it is the subject of some renewal of interest in view of the uncertainty about oil supplies and the problems currently surrounding nuclear fission power. This NASA publication carries a certain amount of useful historical and technical information but little conviction when it tries to show that the American authorities really are making determined efforts in this direction. Concern with the profitability potential is evident, leaving the impression that this publication is not much more than window dressing. Admittedly, it does not take too much imagination to envisage a situation in which the ruling class might regret their present uncommitted attitude, but capitalism is not conducive to long term planning which involves a long, anxious wait between investment and return. To the socialist, however, wind power is of interest because it offers an ecologically benign method of energy generation in keeping with the co-operative society.

Wind machines are as old as civilisation. Persian writers of several hundred years BC described gardens irrigated by wind-driven water lifts. It is believed that this ancient technology may have been carried by returning Crusaders, as it was about this time that windmills appeared in Northern Europe. In America a different, small design extended agriculture and ranching into previously barren land. In the forty-years before national grids became established, the windmills took on a new role as generators of electricity.

These early windmills were mechanically inefficient. The wind is a fitful thing, one moment too weak to be harnessed, the next so potent that the best wind turbine has to be shut down in self- preservation. The nature of the loading leads to fatigue problems on the rotor blades and shafts. The Department of Energy/NASA programme which this booklet claims to describe is, within its constraints, trying to apply modern technology to these problems.

Four aircraft companies have been contracted to design wind turbine components. Not only does this bring sophisticated technical expertise on the scene, but it also provides the capitalist owners with a potential alternative product. (It is quite possible that aircraft sales, both civil and military, will dip permanently in the future.) This powerful sectional interest should not be ignored, but the author makes clear that profitability, in particular the cost of energy produced is the overriding consideration. To quote Schefter: “So important is the factor that a predetermined cost of energy goal is written into every wind turbine development contract”. This philosophy, inherent to capitalism, tends to favour wasteful, polluting methods of production over environmentally conservative alternatives because generally speaking the conservation element puts a non-profit making block into the loop.

Under socialism different, socially oriented criteria will be employed when democratic decisions are made about what technology should be used for given tasks. The profit-led economic considerations of capitalism will be a thing of the past. It is however encouraging to hear of the progress being made despite limited financial support to overcome the technical problems associated with this environmentally satisfactory method of energy production.