‘Frank Faces of the Dead’, by Richard Montague, New Horizon 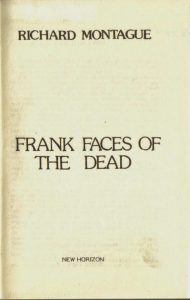 This short novel (190 pages) set around a street riot in Belfast which later develops into a bloody battle between the two IRAs (official and provisional) and the British army is essential reading for an understanding of the situation in Northern Ireland.

Written by a socialist, it succeeds well in introducing the socialist argument (through one of the characters, Nora Quinn, a nurse in a Belfast hospital) without turning the novel into a political tract. But even without this the basic story, bringing out the utter futility of violence, is itself an illustration of the socialist case.

Here, for instance, is how the “hero”, Johnny Cairns of the Official IRA, recalls one of Nora’s arguments, in the course of the battle:

Before man can be anything, Johnny, Catholic, Protestant, English, Irish, black or white, freeman or slave, he must be LIVING—not dead!! In order to live he needs food, clothing, shelter, Johnny, and in order to live in freedom, he needs free and equal access to these things. Will your Luger create the conditions of abundance for freedom, Johnny? Is your gun the great revelation? The precursor of universal knowledge? Have you revolutionised the gun? Changed its historic role of enslaver to that of emancipator? Is it to be the voice of the people with the alchemistic power to make freedom, the fruit of knowledge, grow on the barren boughs of ignorance and acceptance?”

And how Nora explains the historical background to a young recruit to the Provisional IRA:

“Dermot, I don’t want to go back into history; suffice it to say that the propertied class in Ireland, at the turn of the century, the established capitalists in the North and their fledgling class-brethren in the South, were politically divided. In the South, they wanted control over their own political affairs in order to legislate conditions in which they could nourish their developing capitalist economy—they needed to restrict competition with tariff walls and import quotas. In the North, on the other hand, capitalism was well established, developed against the British home market. So the Northern capitalists needed to maintain the link with Britain to sell their wares and the Southern capitalists needed protection from British capitalism.

The workers, North and South, because they mistakenly associated their interests with the fortunes of their masters, were lined up behind the capitalists in their respective areas. The Southern capitalists rallied the people there behind them by appeals to patriotism and the notion that if they had their own government they would be free. The Northern gentlemen achieved their end by exploiting historical fictions and blatantly promoting religious bigotry.”

There’s more too on the futility of leadership and the need for socialist knowledge, on the state capitalist nature of Russia and nationalisation.

Richard Montague’s dedication in the book