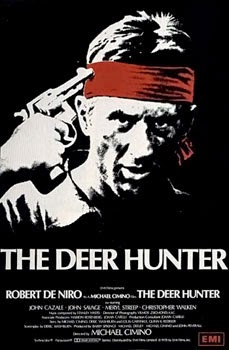 This is a haunting film, of great emotional intensity, with little relief. The story begins in a Pennsylvanian steel town—a hell-hole of heat and noise and smoke. There, in impossible conditions, the three young men who are conscripted to fight in Vietnam work—and when they leave work it is to live under the very shadows of the mills.

Their recreation is juvenile; stalking and killing deer, getting riotously drunk, playing worship to a shocked soldier home from the war. Before they get to Vietnam it seems an exciting adventure, a glorious change from the grinding routine of the furnaces. Once in combat it becomes a nightmare in which all three are destroyed physically or emotionally.

One loses his legs and withdraws into the shell of the Veterans’ Hospital where volunteers from the American Legion lay on macabre games of bingo for the limbless. Another is hooked on heroin and dies playing Russian roulette for money in a Saigon casino. The third, the caricature of a hero, comes home in one piece but can no longer relate to his former life. Once the expert deer hunter, when he goes out to hunt again he is so sated with death and pain that he cannot pull the trigger on the animal he has in his sights.

The film has come under heavy criticism, notably from reviewers like John Pilger and other war correspondents who witnessed the fighting. They argue that The Deer Hunter is biased against the Vietcong and shows nothing of the opposition to war in America. (None of which prevented it from winning a number of Oscars!)

There is some force in these criticisms, yet there is no hint in the film that war is anything other than obscene. No better world is promised, to rise from the ashes in Vietnam. The legionnaires in the hospital are shown up as ridiculous, prepared to absorb endless punishment from capitalism. Saigon is depicted as a city where human standards have been crushed by the violence, the cynicism and the rush to make money while the going was good.

Patriotism is made to look futile, out of touch with reality. The final scene, after the funeral of the man who died playing Russian roulette, shows his friends in the shack where he lived, in the middle of the wasteland among the steel mills. It is a ghastly place and they are wretchedly unhappy. Yet their tears are dried as they sing, together, “God Bless America”. No patriot could find comfort in that scene – nor, for that matter, could any socialist. We do not look easily at capitalism’s vile face.