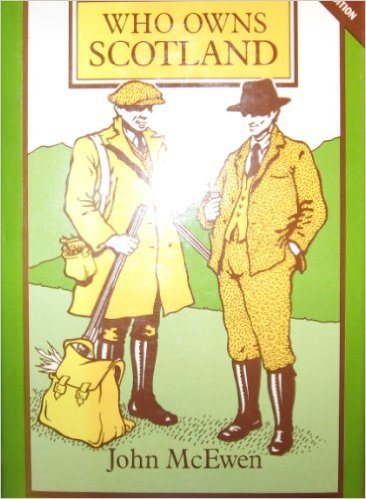 This book sets out to list those people who are the real landowners in Scotland. The author, who is over 90 years old, has worked in forestry in Scotland practically all his life and writes from the inside; the book is heart written in sorrow.

The work is in two sections. The first lists actual ownership of Scottish land, in terms of thousands of acres. McEwen starts by giving a league table of the top 100 landowners. At the head is the Duke of Buccleuch with what McEwen calls an “obscene” 277,000 acres. The Countess of Sutherland, whose ancestors were as ruthless as any in the last century’s highland clearances, owns only 185,000 acres, while poor old Lord Home has a mere 54,000 acres. Poverty indeed; he doesn’t know where the next grouse is coming from. This section then divides Scotland into areas, and looks at the ownership of each part of it. The results are pretty well what one would expect. The total area of Scotland is 19.068,807 acres (“Our land” as the author so childishly calls it). Of this, 16,500,000 are owned privately (as opposed to owned by the State) and of this figure 12,000,000 are in estates of 1000 acres or more. The chances are that many countries in the Western world would show a similar pattern.

The second part of the book consists of a series of essays under the general title of “Management and Husbandry of Our (sic) land”. Here McEwen ranges over his pet topics, complains about bad husbandry, the “sadistic anti-social-blood-sportsman”, the failures of the forestry commission etc.

It would be nice to welcome this analysis; but it is impossible to do so. To begin with the book contains many petty mistakes, revealing that the editing has been undertaken carelessly. This may not be important; but it makes one wonder just how carefully the tables have been checked.

More important is the fact that the author is a confused Labour Party supporter. This results in a book that is “all right” if all one wants to do is quote a few impressive sounding statistics (e.g. in 1874 the Sinclairs held 187,000 of the 471,000 acres of Caithness, now they hold only 52,000 acres, etc), but useless if one wants to understand the basis of land ownership in a capitalist society, and its twin brother, rent. The author’s analysis of the cause of problems relating to land is, quite frankly, hopeless. For example, he claims that the formation of the Forestry Commission in 1919 “with the objective of establishing state-owned forests was one of the finest things which ever happened in land ownership and land use in Britain.” The Forestry Commission was formed as a result of the war time shortage of timber, and the need for what McEwen disarmingly calls ‘‘everyday domestic use”. But what he does not realise is that capitalism does not want timber for “everyday domestic use”; it wants timber for sale at a profit. How this elementary observation has escaped McEwen is quite baffling. As a result, his “solutions” become naive to the point of absurdity. So for example in calling for lower agriculture prices (the farmers will love him for that) he says this can be achieved by eliminating the “middle-man”.

The book concludes with a call for the Labour Party to do something. And what should they do? Why, establish a Royal Commission of course! This should “enquire deeply into the failure of private landlords in their so-called stewardship of land in Britain.” That will frighten them on the grouse moors and in the deer forests. And after the Royal Commission? — nationalisation of the land. Nationalisation of coal, or railways, or electricity etc has solved no workers’ problems. Why nationalisation of the land should do so McEwen can’t explain. He doesn’t even try. The book shows how pointless are “the facts” unless they are interpreted, through socialist understanding, in the interests of the majority.