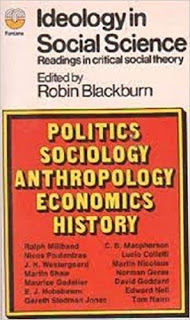 Ideology in Social Science. Edited by Robin Blackburn (Fontana. 75p.)
Ideology for the Marxist, is not simply any system of ideas. It is a false (though not necessarily consciously false) system of ideas, a wrong way of looking at and explaining the world. In the study of society the dominant bourgeois ideology is the assumption that what is being studied are “objective facts” similar in status to natural facts. But, and this was Marx’s point, social phenomena differ from natural phenomena in being, in however disguised and roundabout a way, human creations. Indeed, the task of social theory is precisely to uncover this and so demonstrate that society, being man-made, can be changed by conscious human action. Bourgeois ideology, on the other hand, in treating social and economic phenomena as unchanging, natural facts denies this; it turns social relations into things. This is particularly obvious in economics where money, wages, prices, interest, profit, etc are defined in such a way that they must exist in any society, so making capitalism appear to be a natural and eternal social system.Norman Geras’s contribution on “Marx and the Critique of Political Economy” in this collection of essays brings out this point very well. Indeed some of the other contributors would do well to read him.These essays are divided into three groups: critiques, key problems and alternatives. The first group is by far the weakest. The second demonstrates that present-day society is still an unequal and profit-governed one. Amongst the essays in this section is one by Nicos Poulantzas  (criticizing Ralph Miliband’s The State in Capitalist Society on the same sort of grounds as we did in 1969). Miliband tended to argue that what made the “capitalist State” capitalist was that those occupying its top posts were drawn from ruling-class backgrounds. Poulantzas points out that, though this may well be true, it is irrelevant since under capitalism the State would still have to act in the overall interest of the capitalist class even if the top posts were filled entirely by people from working-class backgrounds. It is the State’s rôle, rather than its personnel, that determines how it acts.

The third part gets a bit involved, but the essays by Hobsbawn and Nicolaus (particularly good on Marx’s Grundrisse) as well as Geras’s are well worth reading. The final contribution which asks “Marxism: Science or Revolution ?” raises a very pertinent point in view of the fact that (probably) none of the contributors understands what Socialism is, thus showing that for them Marxism is not the theory of the Socialist revolution but merely another way of interpreting the world. Certainly, most of them stand for social change of some sort but, if the references to Russia, China and Cuba are anything to go by, merely from private capitalism to state capitalism.

Nevertheless, the book is worth reading for some of the ideas contained in it.