A Tenth of Marx’s ‘Grundrisse’ 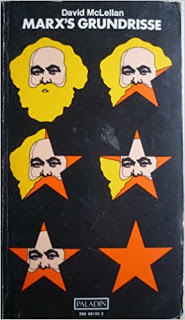 In 1923 some previously unknown manuscripts by Marx from the period 1857-8 were discovered, but were not published until 1939-41. These thousand pages of hand-written notes are known as the Grundrisse Der Kritik Der Politischen Oekonomie (the Basic Principles of the Critique of Political Economy) or simply as Marx’s Grundrisse. They have not yet been translated in full into English despite this book which is really a bit of a take-on. It only includes 100 of the 1,000 of Marx’s pages, as well as 30 more which have been available in English translations since 1904. And some of McLellan’s summaries are tendentious in that they advance his view that Marx always was more of a humanist philosopher than a socialist economist.

Nevertheless some of the selected passages are interesting in that Marx spells out in some detail how capitalism prepares the basis for Socialism and what Socialism will mean. His views can be summarised as follows.

Capitalism, as it develops, brings about a number of connected changes in the character of production:

These developments, said Marx, make it possible for society to use science to reduce the working day, make work interesting and attractive and increase the free time of every member of the workforce, and also to abandon the exchange of products in accordance with their labour-time values.

But, his argument goes on, capitalism cannot do this because it is based on the exploitation of the workforce by the theft of their surplus labour (or potential free time) and it cannot distribute products other than through the price mechanism because they must be converted into money in order to realise as profit the surplus labour embodied in them and to recover the capital invested in their production.

These passages came as a relevation to the pseudo-Marxist Left who, misled by the Russian revolution, had imagined that Marx shared their view that “socialism” was merely nationalisation and planning, with or without democracy, and who had even twisted other passages from Marx to make it appear that he too thought that money, wages, prices and so on would continue to exist at least in the “first phase” of “socialism”. The passages caused Herbert Marcuse (who must be given the credit for first publicizing them in the English-speaking world) to declare that the Left had not been utopian enough!

But they came as no surprise to us. We had long realised, and argued in the face of fierce opposition and jibes of “utopian” from the Left, that Marx had always expected Socialism to involve the abolition of production for sale and a great change in conditions of work.