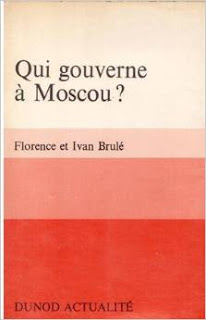 This short book — Who Governs in Moscow? — covers much the same ground as our own pamphlet on Russia since 1917, and in not many more words. With one very important exception (the authors say that the Bolshevik seizure of power was originally a socialist revolution, a myth many times exposed in these columns), it gives an explanation similar to ours of the failure of Bolsheviks to establish Socialism.

“Socialism”, the authors point out, “is a mode of production which allows everybody to receive according to his needs. Its establishment presupposes abundance”. Scarcity, however, reigned in 1917 in technically and economically backward Russia. The immediate need to feed the population and then to develop modern industry meant a division into classes, one controlling the means of production and the other selling its ability to work — a situation Marx defined as characterising capitalist relations of production. The Russian ruling class is “a collective capitalist, a capitalist class which has a firm grip on the means of production as against those who do not”. It controls production and its objectives; it imposes the condition of work and fixes the level of wages.

The absence of a legal right to property as in the West should delude no one, says the authors. For property is not “a relation between person and object, but the fact that one man disposes of the object while another does not:. Property, in other words, is not a relation between men and things, but a social relation.

The book also contains useful information on the privileges and composition of the ruling class, the role of the peasantry, the oppression of the working class, unemployment, discrimination against minority peoples and the lack of freedom of expression in Russia. It should provide a useful exposure of the myth of “socialist Russia” for workers in the French-speaking parts of the world.