Theatre Review: A Drama of Hungary 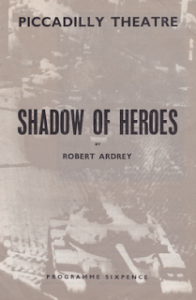 It is not often that we see before us on the stage a re-enactment of events only recently cast into history, whose beam has lowered sufficiently to throw a “Shadow of Heroes” on to our vision; that of the people of Hungary, whose struggles formed the stuff of Robert Ardrey’s play at the Piccadilly Theatre in November.
Ardrey has given us an epic, or a document if you will; a play that points no finger, no moral, but simply shows us people playing the only parts they know, in a world not of their own making.
Lately familiar-sounding names: Kádár, Gerő and Rákosi, echo about the actors who present them to us— impersonally. Rajk, the idealist, and Kádár, the dedicated plodder; who fought in the Hungarian Communist underground; Gerő and Rákosi, the suave politicians, who, after due preparation in Moscow, were returned to Hungary in the wake of the Red Army to rule for the Kremlin.
That which followed is what we have come to know as the Hungarian tragedy and the events that lead up to it; new events in an old pattern. We are soon aware that there is no common cause between those Hungarians from Moscow and those from the cellars of Budapest.
Rajk is hanged as a sacrifice to the needs of rotten political expediency, on a trumped-up charge of Titoist conspiracy, and resurrected as a public hero at the behest of another. As an attempt to line up with the new coformity, the Khrushchev ascendency after the death of Stalin, which went astray and, instead, exploded the keg of suppressed working-class hatred for the oppression of their “ liberators ” in October, 1956.
Through all this Kádár appears as little more than a pawn, a servant of the Communist Party, to be pulled up and pitched down as and when the interests of the ruling circle require it.
Finally, the intrigues of the Communist overlords for the perks and privileges of despotism, skulking from the wrath of Moscow, eventually invoke that wrath upon themselves and the unfortunate working class.
Ardrey knows little of politics and the motive forces of history (at least this is not apparent). Neither should we credit him with personal or political accuracy without verification.
But he pronounces no judgment that his narrative does not do for itself. He gives no causes; no profound analysis. Just people. This is both the strength and weakness of the play. We are free to draw our own conclusions (except for Mr. Emlyn Williams’ slight vocal insinuations). Some may draw the wrong ones, or none at all: but at least we are not told what they should be, which is refreshing and salutary.
There is an air of openness about the play: a “chorus,” or story teller, weaves in and out the action, the actors set their own scenery of broken outlines, around which the drama unfolds.
We are not involved: we sit and watch, listen and, maybe, think.
Ian Jones