“The Sugar Pill”—An Essay on Newspapers By T. S. Matthews Published by 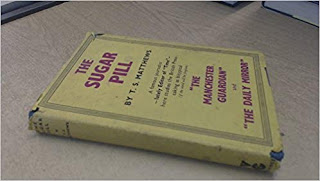 Victor Gollancz
This serious, though lightly written, book is one of the most interesting that this writer has come across. The author, a retired American journalist, puts forward the thesis that the press—that is, the daily and weekly papers—are “not our daily bread, but our daily sugar pill.” By a character study of two newspapers, the Daily Mirror and the Manchester Guardian, which are considered to be representative of the whole range of the press, Mr. Mathews puts forward an argument that is more than convincing; not that we need convincing, we already knew.
He rounds off this 221 page book with a detailed examination of a day’s issue of the above newspapers which is extremely revealing.
There are not only two classes in society—capitalists and workers, but apparently two groups of newspapers, the quality press. The Times, Manchester Guardian and Daily Telegraph, and the popular press, the Express, Sketch, Mirror, etc. Not, of course, that these represent the conflicting classes, workers and capitalists, but rattier conflicting interests, that is, sectional ones, among the capitalists. This is true of the whole press in this country, with the exception of the Socialist Standard; from the Fascist paper Union on the so-called extreme right, to the Daily Worker on the so-called extreme left. They are all interested in perpetuating capitalism in one form or another. These two newspaper groups, like workers and capitalists, are in constant conflict, according to the author. “The real competition, in short, although it has not yet broken into open war, is between the popular press and the quality press. And the stake in that coming war will be survival. If the present trend continues—that is, if the more successful popular papers continue to capture more and more new readers—then the Popular Press will win, and eventually become what it already claims to be: the only press worth mentioning, the only press there is. It will first kill off ‘the more serious of the popular papers ’ and then turn its attention to the only competition remaining, the papers of the quality press. Perhaps it may be decided to let them live, as harmless traditional curiosities, like the Beefeaters at the Tower” (Page 170): All of which is quite illuminating, but is really all that one expects from this jungle world of capitalism, where dog eats dog, and the weakest always goes to the wall.
One thing that this writer finds most encouraging, although he has long surmised it, is that despite the seriousness with which all newspapers take themselves, apparently few of the millions of people who “read” newspapers in this country do more than glance at them. Front page, back page, comic strips, the body or bodies beautiful, and the odd eye-catching headline. The Mirror’s reading time is given as “six minutes a day.”
The Mirror, we are told, considers itself “a daily cocktail with fizz in it. Taken first thing in the morning (along with your dose of liver salts) at the start of another grey working day, it gives the reader a little spurt of liveliness—and makes him look forward to another cocktail tomorrow.” (Page 34.)
We are informed by the author that the press is part of the entertainment industry, and generally speaking, we would concur with that. For all that we should not underrate the power of the press; limited it may be, but along with other media it helps to mould and shape the opinions of the working class. We can be thankful that our journal is not of the shallow variety, and that our readers are not “skimmers.” We should not be complacent about this, though, for our readership is small, and the task of changing this society for one with free access, and full social responsibility, can only be brought about by a working class who have been weaned from their sugar pills on to a diet of Socialist literature.
Jon Keys.