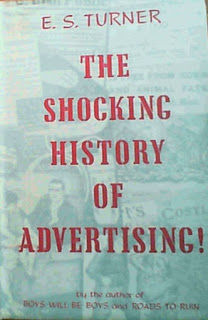 Your attention, Gentlemen, please. Are any of you interested in a pair of ball-bearing sock suspenders? No? Perhaps some of you would like a chest wig or a combined tooth brush and tongue scraper. No? Well, is anyone suffering from constipation or conjunctivitis; from corns, baldness, body odour, fallen arches, bad breath, night starvation or dandruff? Maybe you have diarrhoea, pyorrhoea or gonorrhoea. Whatever your needs, requirements or fancies, real or imagined, you can bet your last shilling that there is someone prepared to invest a little capital, not primarily for the purpose of satisfying your desires, but in order to collect some profit in the process of satisfying them.
If you have no needs, requirements or fancies, you can still be sure that there is someone ready to kid you or convince you that you do have some. Again with the motive of profit lurking in the rear.
That is the main job of advertising; to so present someones wares to you that you will feel that you must acquire them at all costs. You will be flattered, cajoled, threatened and have the wind put up you. All because it is necessary to sell goods before profit can be realised.
Advertising, although its history may go back well before the advent of the capitalist system, really embarked on its career with the birth of capital. Prior to that, advertisements were little more than announcements of entertainments. Capital, with its ever increasing need to find wider and wider markets, took to advertising like a duck takes to water.
Mr. E. S. Turner has written a book which he calls “The Shocking History of Advertising,” published by Michael Joseph, 15s. This book is a study of commercial advertising in newspapers and magazines, on hoardings, on the landscape, on the sky and in the ether. The field is limited to Britain and America and opens in the early years of the 17th century.
Mr. Turner is not a Socialist, but he has obviously spent much time in research and has unearthed a multitude of facts, information and anecdotes. Mr. Turner bubbles over with humour which makes his book very enjoyable. His object appears to be to make advertising more honest and less nauseous. In the process be has presented us with an interesting and amusing book on one of the sidelights of capitalism.
In a world where profit making is the motive force to production all sorts of rubbish, shoddy and inferior goods are produced. The purpose which such goods will serve is secondary. Whether they serve any purpose at all does not really matter so long as a market can be found for them and a profit realised. The chest wigs and tongue scrapers, etc., mentioned by Mr. Turner are an illustration.
Inferior goods must be presented as equal to superior ones, substitutes must be heralded as of the same, if not greater usefulness than the goods which they replace. The health, wealth and general well-being of the people who buy does not come into the picture from the capitalists’ point of view. Patent medicines, for instance, even if not dangerous in themselves, can cause a delay in the time before proper treatment is applied, and thus be a danger. Advertisers can bamboozle workers into collecting all sorts of goods and create the impression that such collections indicate an improved standard of living. With their collections around them, workers can look back on previous generations and imagine themselves better off than their forefathers, losing sight of the fact that their forefathers had things which they have not, and were without things which workers today might have missed with advantage.
Mr. Turner’s illustration of an advertising man is interesting. He presents him as a

” . . . new Jesuit; ‘Give me your children before they are five and they are mine forever.’ To him all values are different. Fog is not something which delays trains; it is something which prevents people seeing posters. Words have different meaning; loyalty means always buying the same hair oil. To him a bride is not a young woman on the edge of a great adventure; she is a conditioned consumer, who, by buying the right cosmetics and the right brassière has captured her man, and who, when she returns from her honeymoon will go into the grocer’s and automatically recite those branded names which have been the most loudly dinned into her ears for the last twenty-one years. To him all problems can be solved in terms of advertising. The remedy for absenteeism in the mines is to make miners want more luxuries. He has made women adopt men’s habits (smoking, wearing trousers) and now he wants to make men adopt women’s habits (using perfume). . . . ”

On a previous page he says :

“. . . the prime object of the advertisers was not to produce these gratifying results (improve the habits of nations); it was to sell more silk, more toothpaste, more disinfectant”

We can add, “with a view to more and more profits.”
We can recommend Mr. Turner’s book for its well, nay, its fountain of information and for the fun to be obtained from reading it. He explodes many myths and superstitions and lays bare the “fear” type of advertising which makes people suspect all kind of ills, misfortunes and misadventures, and fly, terrified, to the purveyor of some quack cure or solution. He shows the attempts that have been made to make advertising more respectable and reveals how it has now, itself, become a lucrative field for capitalist investment. He rounds it all off with such anecdotes as the one about the American broadcast announcer who, whilst speaking on a sponsored programme, was supposed to say, “Always demand the best in bread,” but who spoonerised the phrase. 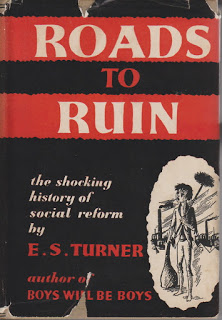 Wisdom without wit is like polish without spit. Mr. E. S. Turner certainly has wit. In an earlier book of his, “Roads to Ruin, the shocking history of social reform,” again published by Michael Joseph, 12s. 6d., he leavens his subject with a superabundance of wit.
The book is divided into ten chapters, each of which deals with the history of a reform that has been enacted during or since the 19th century. Special emphasis is laid upon the opposition to these reforms. Amongst the ten are the stories of the suppression of the use of small boys to climb and sweep chimneys; the struggles of Samuel Plimsoll to achieve what is now known as the Plimsoll line on ships; William Willett’s efforts to secure the passing of the Daylight Saving Bill and early attempts to reduce working hours and secure a weekly half-day respite for workers.
The securing of these reforms has called for much courage and sacrifice on the part of those who fought for them. None of them have in the least affected the position of the workers in the capitalist system, but they have removed some of the worst ills and abuses of the system. We raise our hats to most of the men who strived for them. The Socialist Party of Great Britain aims at the abolition of the system that gave rise to the need for these reforms and, in consequence cannot admit into its ranks anyone whose political objective falls short of that aim. It does not advocate reforms because it is a revolutionary and not a reformist party. That does not prevent us from recognising the merit of many reformers and the value of their work in easing the sufferings of millions of workers.
The attitude of the church, the aristocracy and the vested capitalist interests in their opposition to almost every reform that has been proposed is illuminating. Again, as in his other book, Mr. Turner has delved into numerous archives and sources of information and has collected for us much useful and interesting material.
When the Ten Hours Bill was under discussion, Nassau Senior made the most painstaking calculations to show that the whole of a capitalist’s net profit was derived from the last hour of work of his employees. If their working hours were reduced, he claimed, all that profit would go. Peel and Cobden thought likewise. Malthus said that the workers were lucky to be employed at all and doubly lucky to be employed for such long hours.
Samuel Plimsoll spent most of his life and a lot of his fortune in an endeavour to prevent shipowners from sending over-loaded, unseaworthy, over-insured ships to sea. The story of Plimsoll’s campaign, as unfolded by Mr. Turner, reveals some appalling instances of wanton waste of working class life in the interests of capitalist shipowners’ profits.
In some instances there were men who, whilst advocating the reform of one particular abuse, defended to the utmost other evil aspects of capitalism. Sometimes they were activated by their own profit making interests and at other times by a desire to embarrass or overthrow political rivals. The church dignitaries in the House of Lords are shown in a very foul light by Mr. Turner’s researches.
The author brings into play the same talent for wit, satire, sarcasm and humour that makes his book on advertising so enjoyable. Opposite the title page of his book appears a drawing by David Low of the character, Colonel Blimp, in a fighting attitude with a bath brush, with the caption, “Gad, sir, reforms are all right as long as they don’t change anything.” ‘
W. Waters