Book Review: ‘An Illustrated History of the Russian Revolution’ 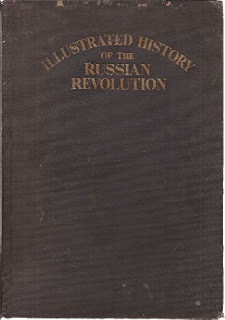 The work of which this is the first volume is described by the publishers as the “only complete history of the Russian Revolution.” The material was supplied by the Lenin Institute in Moscow and by many of the prominent men who played a part in these struggles. It contains a large number of excellent reproductions of photographs , relating to the events described.

This volume covers the period from the beginning of the present century to the middle of 1917. A second volume, to be published this year, is to bring the history up to the introduction of the New Economic Policy and the effort to reconstruct Russia’s industrial life.

It is, on the whole, an exceedingly readable and useful account of the forces which led up to the overthrow of the Czar’s Government, the seizure of the land by the peasants and the withdrawal from the War. It is, however, needlessly inaccurate in dealing with the attitude of Socialists to the War. While Lenin and his associates retained their pathetic trust in the Second International right up to 1914, the Socialist Party of Great Britain had years before realised the non-Socialist character of that body. The British Labour Party, like its French and German counterparts, was not Socialist and could not be expected to take up a Socialist opposition to the War. It is therefore misleading for the writers of this work to state (page 56) that the “Socialists” of Germany, France and England supported the War. The Socialist Party of Great Britain, alone in this country, took up a Socialist stand in 1914 and maintained it throughout the War. That we did so was known to the Bolsheviks.

In 1915, when the British Labour Party and its fellow-parties in the Second International refused to admit the Bolsheviks to their Conference because the Bolsheviks opposed the War, it was to us that the Russian Party came in order to secure publication of its manifesto denouncing this action and repudiating the rights of these jingoes to speak in the name of Socialism. The manifesto in question was published in the March, 1915, issue of the “ Socialist Standard.”