FROM A CORRESPONDENT IN AMERICA. 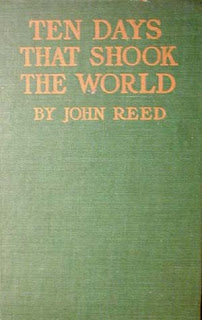 Under the above title John Reed has written his experience in Russia during the Bolshevist rise to power in November, 1917. It is to be followed by another called “From Kornilov to Brest-Litovsk,” covering a later period.

We are flooded with books on the Russian uprising, but still lack a story of the events in Russia written by a Socialist. In other words, we have no book written with an understanding of the relation of actions and movements in Russia to the principles and policy of Socialism.

Apart from a number of war correspondents’ pictures of the rise of Kerensky, we have several so-called radical works on the subject. John’s wife, a Suffragette (Louise Bryant), went to Russia for a capitalist Press syndicate and wrote a series of articles which appeared in all the leading newspapers of America. These are now reprinted under the title of “Six Red Months in Russia.” It is a typical journalistic effort, being some descriptive sketches of people she met and things she encountered. There is no appreciation of the economic or historical value of the actions she describes, and her fulsome praise of Bolshevism is based upon enthusiasm unlit by understanding. Although the lady knows nothing of Socialism she is routed all over the States at high fees and worshipped by every Bolshevik.

Bessie Beatty, of the “San Francisco Bulletin,” a capitalist daily, also took a journalist’s trip into Russia. She wrote a series of articles for the magazines now published as “The Red Heart of Russia.” Like Louise Bryant she was toured all through the country by the Socialist Party and others. Her book adds little to our knowledge, giving the usual story of the coup d’ etat of Bolshevism and the break-up of the Constituent Assembly. There is no examination of the strength of Bolshevism compared with other parties, no enquiry into the truth of so-called reasons for abolishing the Constituent Assembly and the volte-face of Lenin and Trotsky on this subject, and we miss any study of the state of Socialist knowledge in Russia in the alleged Bolshevist book.

Now we come to the present book. John Reed is best known as a war correspondent and the author of a book on the Eastern Front. He has been connected with “The Masses” and “The Liberator”—Max Eastman’s weeklies.

John Reed voted for President Wilson in 1916 and his articles betrayed no Socialist knowledge. Since his return from “Bolshevist Russia,” however, he has been connected with the left wing of the Socialist Party, but his work for Socialism is nil. Like his fellow war correspondent, Arthur Rhys Williams, he capitalised his Bolshevism by speaking everywhere to enormous crowds at enormous fees.

His book purports to be a detailed account of the November Revolution. In a fragmentary fashion he tells the story of the starvation and chaos of the armies at the front and the delegations of soldiers coming to Petrograd in October 1917 demanding something to be done for them. Kerensky’s Government were demanding that Russia should stick to the Allies, but internal disorder was drawing the Provisional Government to its fall. Peasants, tired of waiting for the promised land, were burning manor houses and massacring landholders. Korniloff’s advance on Petrograd and his capture by loyal forces cemented the union for the time being against counter revolution. Kaledine‘s Don Cossacks were plotting against the capital, and on October 23rd a naval battle took place with a German squadron in the Gulf of Riga.

On the pretense that the capital was in danger plans were drawn up to evacuate Petrograd.

The Bolshevists saw in this move a plan to kill rising by removing the Government from the Red centre.

The Bolsheviks called a National Congress of Soviets far November 2nd. This was opposed by the supporters of the Government as being too near the date for the convening of a Constituent Assembly. In the midst of chaotic local election conditions the delegates came to the National Soviets. Judging from the inevitably unsettled conditions it is difficult to know who they represented and what support they had. But this was the Soviet Congress which captured the Government for Bolshevism.

Before the Congress met, Reed tells us, the Bolsheviks in Petrograd were considering an insurrection. Lenin and Trotsky alone favoured it, but their scheme was defeated. Then a “rough workman” and a few soldiers appealed for insurrection and Lenin and Trotsky won. In such a sentimental fashion were the Bolshevik Executive Committee swayed to change their attitude in a few minutes.

The right wing of the Bolsheviki continued to campaign against an armed rising. These were led by Kameniev and Zinoviev. The success of Bolshevik propaganda drove the Kerensky Government to formulate laws for giving the land temporarily to the peasants and for pushing a foreign policy of peace.

In the meantime the question of withdrawing the “Red” troops from Petrograd and sending them to the front had caused the Petrograd soldiers’ soviet to appoint a military revolutionary committee, and this acted as the instrument of insurrection and organised the coup which took control of the Government

On the fateful day—November 7—the Ministry of War and other Government offices were seized by the soldiers and many Ministers ware arrested. Kerensky escaped.

The All Russian Congress of Soviets at Petrograd on November 7th, 1917, controlled by Lenin and Trotsky, issued an appeal to the working people of Russia claiming that it would “ensure the convocation of the Constituent Assembly at the proper date.”

The first decree read by Lenin was one on land ownership transferring it to the township land committees and district soviets to be dealt with “until the Constituent Assembly meets.”

“The peasant delegates wild with joy” is Reed’s description of the result of the enactment of the decree.

A further decree was on the Constitution of Power:

“Until the meeting of the Constituent Assembly, a provisional Workers’ and Peasants’ Government is formed, which shall be named the Council of People’s Commissars.”

Within a few days Moscow Red Guards took charge of the Kremlin and controlled the city for the Bolsheviki The battle between the Committee of Public Safety and the soldiers under the military revolutionary committee lasted six days. In a scrappy fashion Reed tells the story of the control of the cities by the Bolshevik faction, and it reads more like a conspiracy than a proletarian revolution.

On the night of November 17th, 1917, opposition to Lenin’s policy grew.

“Larin (Bolshevik) declared that the moment of elections to the Constituent Assembly approached, and it was time to do away with ‘political terrorism.’
“The measures taken against the freedom of the Press should be modified. They had their reason during the struggle, but now they had no further excuse. The Press should be free, except for appeals to riot and insurrection.” (Page 267.)

Contradictory statements in opposition to this ware made by Trotsky and Lenin. Oh the one hand they said “The victory over our enemies is not yet achieved, and the newspapers are arms in their hands” (p. 269), and they further said that the bourgeois parties “are in the minority.” But how can we explain Lenin’s statement (p. 271) that “the immense majority of the people is with us” if they were forced to close down all opposition papers to prevent the workers being influenced.

The vast majority claimed by the Bolsheviks must have been very wavering to be influenced by the anti-Government Press.

Five members of the Council of People’s Commissars resigned declaring:

We are in favour of a Socialist Government composed of all the parties in the Soviets. We consider that only the creation of such a Government can possibly guarantee the results of the heroic, struggle of the working class and the revolutionary army. Outside of that, there remains only one way: the constitution of a purely Bolshevik Government by means of political terrorism. This last is the road taken by the Council of People’s Commissars. We cannot and will not follow it. We see that this leads directly to the elimination from political life of many proletarian organisations, to the establishment of an irresponsible regime, and to the destruction of the revolution and the country. We cannot take the responsibility for such a policy, and we renounce before the Tsay-ee-kah (Central Executive Committee of National Congress of Soviets) our function of People’s Commissars.

Five others signed without resigning. At the same time Kameniev, Rykov, Miliutin, Zinoviev and Nogin resigned from the Central Committee of the Bolshevik party making public their reasons:

The constitution of such a Government (composed of all the parties of the Soviets) is indispensable to prevent a new flow of blood, the coming famine, the destruction of the revolution by the Kaledinists, to assure the convocation of the Constituent Assembly at the proper time, and to apply effectively the programme adopted by the Congress of Soviets.
We cannot accept the responsibility for the disastrous policy of the Central Committee, carried on against the will of an enormous majority of the proletariat and the soldiers, who are eager to see the rapid end of the bloodshed between the different political parties of the democracy. . . . We renounce our title as members of the Central Committee, in order to be able to say openly our opinion to the masses of workers and soldiers. . . . We leave the Central Committee at the moment of victory; we cannot calmly look on while the policy of the chiefs of the Central Committee leads towards the loss of the fruits of victory and the crushing of the proletariat.  . . .

The old officials continued to sabotage the Government and strikes of technical functionaries took place, especially in halting the transportation of food. Banks, railroads, posts and telegraphs were jeopardised by this walk out. The armies at the front were dying of hunger.

the Council of People’s Commissars abolished private property in land, but the regulations drawn up by the land Committee are based on private property. . . .  However, no harm has been done by that, for the Land Committee are paying no attention to the Soviet decrees, but are putting into operation their own practical decisions—decisions based on the will of the vast majority of the peasants.  . . .

Reed promises to tell us in his coming book why the Constituent Assembly was destroyed by the Bolsheviks. In the meantime it may be well to note that in his “Letter to the Comrades” (326) written a few days before the insurrection of November 7th 1917, Lenin says:

Since September the Bolshevik party has been discussing the question of insurrection. Refusing to rise means to trust our hopes in the faith of the Bourgeoisie, who have “promised” to call the Constituent Assembly. When the Soviets have all power, the calling of the Constituent is guaranteed, and its success assured.