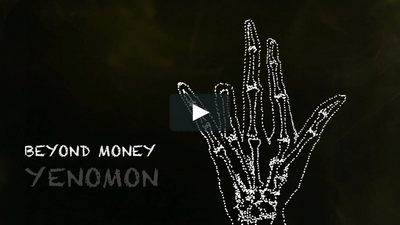 Beyond Money: Yenomon. Anitra Nelson.
This short 7-minute film echoes and reinforces a number of aspects of the views expressed in Nelson’s book and we would strongly recommend it to readers of this journal.

The introduction to the video outlines its aims and intentions: ‘What might a world without money look and feel like? A way forward addressing the two great challenges of our time – economic unsustainability and socio-economic inequities.’ And it manages to say a lot in its 7-minute length, beginning with an economical and effective statement of the human and environmental damage and wastefulness that goes hand in hand with the current system. For example: ‘Producing for trade damages nature, increases carbon emissions, destabilises weather and leads to more fires and floods’, ‘Markets are wasteful and inefficient causing social and ecological conflicts and injustice’, and ‘Capitalism elevates banks, budgeting and prices as it degrades people and nature’. The video than goes on to elaborate on the alternative to this, as proposed by the author’s book: ‘a world without money, a world based on real values, social and ecological values, a world where we co-govern all together deciding what we do, make and get’.

Nelson sees that world as a global network of small democratically organised communities which are more or less self-sufficient and autonomous but also interact with one another as necessary to satisfy the fundamental aim of ‘lifelong security of communally meeting our and Earth’s basic needs’. She goes into a certain amount of detail on how she sees this as working, more than is possible to cover in a short review, but the article on her book in last month’s Socialist Standard says more about this, as of course does the book itself.

So what about Anitra Nelson’s vision of the moneyless society? Is it one we can enthusiastically share? To a large extent, yes. The Socialist Party’s vision of socialism in all the 118 years of our history has been one of a democratic wageless, moneyless world based on the principle of ‘from each according to ability to each according to need’. However, we have always been reluctant to put forward precise organisational details on the grounds that this will depend on the level of material and technological development that has been reached at the point the majority of workers decide they want to establish socialism. Of course we do not discourage visions, such as laid out here, of what that society may be like for those who set it up and live in it. But they are precisely that – visions. They are not – and should not, in our view, be – blueprints to which those who advocate a moneyless world feel it necessary to adhere. We have ourselves on occasions attempted to explain how a wholly democratic world society based on the principles mentioned above might be organised, for example in our pamphlet, Socialism as a Practical Alternative, but that as material for thought and discussion more than any kind of hard and fast principle.

What we would insist on, however (and this is perhaps our main ‘argument’ with Anitra Nelson), is the need for the vast majority of workers globally to take democratic political action, via the ballot box if possible, to establish socialism – and this as a prerequisite for the establishment of the marketless, moneyless society, however that majority decides to organise it. Once humanity has got rid of capitalism and the operation of its economic laws acting on humans like uncontrollable laws of nature, we will be in control of its destiny and can decide what we want. Then we would truly be in a position, as the author puts it, to ‘collectively satisfy everyone’s basic needs’ and to fulfil our real human potential as creative active beings, with real freedom, real liberation, real power’. Who could argue with that?

Next article: 50 Years Ago: The Presidential Election – “As Long As It’s Black” ⮞