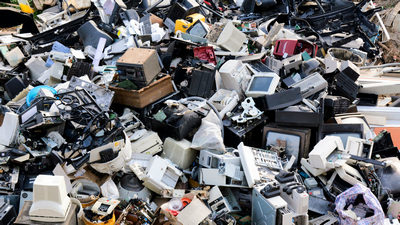 The more modern neo-Malthusians disparage the idea that a post-scarcity society of bountiful abundance is possible by insisting that the world’s resources are finite and such a vision is unsustainable. Economic growth and calculating the planet’s ‘carrying capacity’ are conceived in their capitalist context. One of socialism’s aims will be to reduce waste of all kinds where the goal will be conservation. Quality goods will replace built-in obsolescence. Cleaning up their mess robs corporations of their profits, the costs in human health and environmental problems are not their worry. With socialism, resources will no longer be frittered away and instead people will devote their energy and skills to healing a sickened poisoned planet.

Mining is a dangerous, dirty, destructive and damaging method of extracting metals and minerals. It is harmful to the environment and to the local communities. Yet it is viewed as the inevitable price to be paid to supply the world’s industry and technology.

Could it be different?

Some of the richest deposits of valuable elements necessary for manufacturing are found in refuse dumps and landfill, ranging from gold in smartphones to cobalt in electric car batteries.

Tons of disused electronic equipment are wastefully dumped every year. According to UN research, 50 million tons of e-waste were produced in 2018. Discarded mobile phones, televisions, computers, car parts and countless other items contain varying amounts of gold and silver, lithium, nickel, cobalt, copper and zinc. They can be reused if processed properly.

The annual production of electronic goods worldwide requires 320 tons of gold and 7,500 tons of silver. Yet only 15-20% of the world’s electronics are recycled annually.

The US generated an estimated 6.92 million tons of e-waste in 2019. To put that into monetary terms, the value of the materials contained in those electronics is estimated to be around $7.49 billion. But in terms of labour, it is millions of hours of toil.

If we look at cell phones alone, one ton of cell phones produces 150g of gold. Not a lot but consider that one ton of ore excavated from a gold mine produces only 5g of gold. The Environmental Protection Agency estimated that for every million units recycled, one could extract: 75 pounds of gold, 772 pounds of silver, 33 pounds of palladium and 35 thousand pounds of copper.

‘…we need a circular economy for these materials. At the moment, we’re just mining them out of the ground constantly,’ Elizabeth Ratcliffe from the Royal Society of Chemistry has explained (bbc.in/3SMz2KV).

Prof Richard Herrington, the head of Earth sciences at London’s Natural History Museum, has suggested that ‘…by 2035, we’ll have sorted out a good source of recycled metal; we’ll need to continue some mining. But hopefully, by 2050, we would have built a truly circular economy so that most if not all of what we need can come from metals that we’ve already mined and are already being used in products and technologies’ (bbc.in/3y7QDFc).

However, the Socialist Party doubts such optimism. Costs of recycling deter investments in urban mining. Currently, companies choosing to skirt the regulations around how e-waste is processed means more money for them in the short term.

In the name of profit production, capitalism depletes an enormous amount of the world’s resources and its people’s abilities. We’ve got the technology to reduce, repair, reuse, and recycle much of what we throw away, but its use isn’t encouraged enough by our current system. Before we can apply more sensible and practical approaches to using our resources, capitalism itself needs to get thrown onto the rubbish dump. Production can be geared to meeting needs in an ecologically acceptable way, instead of making profits without consideration for the environment.

The Socialist Party is not appealing to individuals or governments to launch lifestyle campaigns to recycle more. We want systemic change to make a real difference.

“Not enough is being produced, that is the root of the whole matter. But why is not enough being produced? Not because the limits of production have been reached — even for today and by present-day means. No, but because the limits of production are determined not by the number of hungry bellies, but rather by the number of purchasers with full purses. Bourgeois society has no desire, and can have no desire, to produce more. Those impecunious bellies, the labour which cannot be utilised with profit and is thus incapable of purchasing, fall prey to the mortality figures. Let us assume that there is a sudden boom in industry, such as is constantly occurring, to enable this labour to be employed with profit, then the labour will acquire the money with which to purchase, and the means of subsistence have as yet always been found. It is the endless circulus vitiosus [vicious circle] in which the whole political economy revolves. One takes bourgeois conditions in their entirety as one’s premise, and then proves that each separate part is a necessary part thereof — ergo, an ‘eternal law’ (Marx, letter to F.A. Lange, 29 March 1865).