50 Years Ago: The Presidential Election – “As Long As It’s Black”

What does Nixon claim as he goes to the polls this time? American capitalism has made, or is about to make, a deal with China and North Vietnam which will carve up anew a piece of South-East Asia and probably halt the war in Vietnam. The diplomatic burrowings of Kissinger have brought home to the American ruling class that they cannot hope to win the war there, only to finish it. As in 1968, Nixon is promising to end the war, by which he means to provide an interval before the next conflict and to set up the battle lines for it. 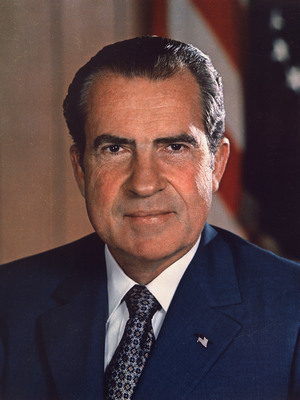 At home, Nixon can draw comparisons between 1968 and 1972 which are to his advantage. When the Democrats met at Chicago in 1968, they did so within a barbed wire stockade and behind a tight security screen while outside tear-gassing, troops with fixed bayonets and rioting police were accepted sights. Although this was a heavy over-reaction by Mayor Daley, it was also a climax of years of protest in which pitched gun battles and deaths were common. The conventions this year went off with hardly a whiff of tear-gas or swing of a truncheon. Symbolically Bobby Seale, who was gagged at the trial which followed the Chicago 1968, is now standing for Mayor at Oakland, California. The figures say that violent crime is increasing in America and New York (which is not the worst city) recently notched up a new record for the number of murders in a single day. But there is enough scope in the statistics to enable the Administration, with a bit of juggling, to claim that the increase in violence is slowing down and it is with such material that successful election campaigns are fought.

During Nixon’s term American capitalism has been faced with the customary economic problems which, in the customary way, he has promised to control with some “fine tuning” of the economy. In a nation of car owners, this phrase is easily understood and accepted. In August the American government “floated” the dollar, slapped a duty surcharge on imports and declared that they were going to control prices and wages. Such measures in fact have no effect on capitalism’s economic crises, which are a matter of cycles out of the control of politicians or anyone else. At the crucial time in terms of his re-election, Nixon can claim that the rate of inflation is slowing and that unemployment has fallen; the cycle is running his way and should help him to victory.