In September the G7, the group of the world’s leading Western capitalist economies (US, Canada, France, Germany, Italy, Japan and Britain), agreed to try to impose a cap on the price of Russian oil. The level has not yet been fixed but is likely to be somewhere near to the cost of production plus a mark-up for profits. Russia would still have an incentive to export oil but would only make a ‘normal’ profit rather than the super-profits that they and others (such as Saudi Arabia and the Gulf States) get because the cost of extracting oil there is less than the cost in the other parts of the world whose higher cost of production sets the world price.

What the West seems to want is to impose as the price of Russian oil is what Marx in Volume III of Capital called its ‘production price’, ie, its cost of production plus the average profit on the capital invested in its production. Over a fifth of Volume III is devoted to a discussion of this in relation to ground-rent, the money paid to a landlord for the use of their land to grow crops or raise livestock but also to extract materials.

David Ricardo is credited with being the first to explain why different areas of land yielded a different rent. The price of what it was used to produce was fixed by what Marx later called the production price on the least fertile land producing it. Those farming more fertile land, where the cost of production was correspondingly less, still sold their produce at the higher price and so made super-profits but which, unless they owned the land themselves, were taken by the landowner as ground-rent.

Marx accepted this theory. Ricardo explained how it applied to mines:

“[T]here are mines of various qualities, affording very different results, with equal quantities of labour. The metal produced from the poorest mine that is worked, must at least have an exchangeable value, not only sufficient to procure all the clothes, food, and other necessaries consumed by those employed in working it, and bringing the produce to market, but also to afford the common and ordinary profits to him who advances the stock necessary to carry on the undertaking. The return for capital from the poorest mine paying no rent, would regulate the rent of all the other more productive mines. This mine is supposed to yield the usual profits of stock. All that the other mines produce more than this, will necessarily be paid to the owners for rent” (Principles of Political Economy and Taxation, ch. 3).

This applies today to the extraction of oil, its price being fixed by the production price in the least productive oilfield in use.

What the G7 are trying to do is to prevent Russia from benefitting from having a lower cost of production than in the oilfields that set the price of oil and so reaping a super-profit. This is to be done by forcing Russia to sell its oil at a price nearer to its price of production. It’s a clever scheme – to be enforced by refusing to insure tankers carrying Russian oil bought above this price – but it may be too clever. Russia has already announced that it will refuse to sell oil to any country that goes along with the G7 plan. And it can’t be a coincidence that the day after the plan was announced Russia suspended the direct supply of gas to Germany.

While the capitalist West and capitalist Russia battle it out, economically and militarily, as to whose sphere of influence Ukraine should be in, workers everywhere are suffering the consequences in terms of higher and higher energy bills reducing their standard of living. But it’s a pain both sides have no qualms about inflicting. 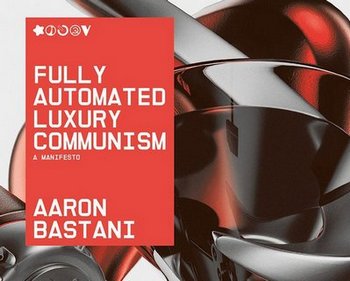 FALC
The term ’Fully Automated Luxury Communism’ was invented by Aaron Bastani. In his book he says he is using the word to ‘denote a society in which work is eliminated, scarcity replaced by abundance and where labour and leisure blend into one another’ (p. 50). He calls this communism after Marx’s ’higher phase of communist society’ when ‘all the springs of co-operative wealth spring more abundantly’ and society can ‘inscribe on its banner: From each according to his ability, to each according to his needs!’Bastani sees such a society having become possible as a result of what he calls the ’Third Disruption’, the two previous ’disruptions’ being the Agricultural Revolution and the Industrial Revolution. His Third Disruption is basically the application of information technology to production; which ’means machines will be capable of replicating ever more of what was, until now, uniquely human work’ (p. 37).A large part of his book is devoted to describing the possibilities that his Third Disruption opens up, such as full automation, gene editing, asteroid mining, synthetic meat, and endless energy from natural forces. He sees this last as eventually leading to a situation where it will be so cheap to produce individual items of wealth that there will be no point in putting a price on them; they could simply be given away. Similarly, work for a wage would become redundant as people would no longer have to sell their working energy to access what they need.

’What stands in the way isn’t the inevitable scarcity of nature, but the artificial scarcity of market rationing and ensuring that everything, at all cost, is produced for profit’ (p. 156).

How does he think society will get there? Disappointingly, but all too common amongst authors who present an often trenchant criticism of capitalism, he advocates various measures that he sees as steps in the right direction; he rejects UBI in favour of UBS (universal free basic services) as being more compatible with the ultimate aim.

He also states that ’any attempt at communism within the limits of the Second Disruption’ was ‘impossible’ (p. 241); this, because before the coming of IT it would not have been possible to eliminate work. But is eliminating human work an aim of communism? Hasn’t it been rather to eliminate working for wages, reduce working hours and make work enjoyable? And would it not have been possible to produce plenty for all on the basis of the common ownership of productive resources even before the digitalisation of information? Maybe it wouldn’t have been FALC, but certainly highly-automated, enough-for-all communism.