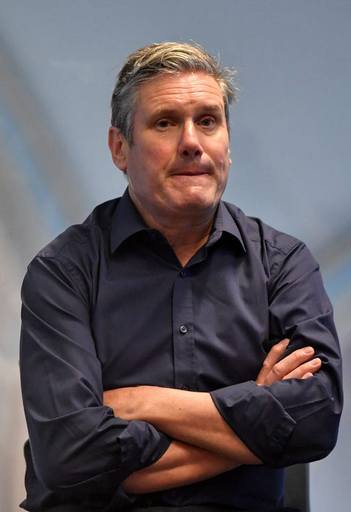 This is your periodic (though unnecessary) reminder that the membership of the Labour Party elected as their leader – and thus chief spokesperson – a man who has accepted a knighthood. This speaks volumes about Keir Starmer’s attitude to the existing state of affairs, and of the political commitment and understanding of Labour Party members. He is committed to retaining and defending the existing state of society.

On 25 July this year he gave what, doubtless, his publicity team would consider a keynote speech (tinyurl.com/3eh6cwse). After the usual political lambasting of his opponents, he delivered his stunning prescription:

‘To give Britain the fresh start it needs, we need a new approach. The goal is straightforward – to maximise the contribution we all make to national prosperity. Every business, every person, every community.’

This is very much going back to the mantra of New Labour and using the state to co-ordinate and promote capitalist agendas. He also makes it clear that he is acting in the name of capitalism in general, because the problem has been:

‘The best of British business is the best in the world. But we have geared our whole economy to delivering only for those firms.’

That is, that only some capitalists are benefitting at the expense of others. This has the neat advantage of playing into the essentially apolitical attack line about Tory corruption, absent which, prosperity for all may rain down. It is also notable because it ideologically subordinates economic activity to ‘the national interest.’ As he says: ‘A strong national economy needs everyone making the best contribution they can.’ And ‘[L]ow growth countries are weaker at standing up for the national interest.’

Starmer sees it as a collective national effort, where the citizens work for ‘the nation’, but just that the citizens should be justly rewarded, and ‘hard work’ made to pay. Human freedom and treating people as ends in themselves is a long way from his imagination. So, he says:

‘To do all that we need three things: Growth. Growth. And Growth. That’s why I have told the Shadow Cabinet that every policy they bring forward will be judged by the contribution it makes to growth and productivity.’

A quick check on Wikipedia gives the following definition: ‘Economic growth can be defined as the increase or improvement in the inflation-adjusted market value of the goods and services produced by an economy over a certain period of time.’ That is, Starmer wants us to create ever more value. Above all else he is channelling the spirit of capital itself, value as the end in itself, not people; and we are all to be subordinated to that impossible voracious demand.

This is, of course, the essential social-democrat position, seeing themselves as removing the inefficiencies of the market system in order to save it and generate productivity. This saves them a lot of trouble, as they are able to argue against redistribution on the basis that a small (or even smaller) share of a bigger pie can be bigger than a bigger share of a smaller pie. It leaves them relying on the market system to generate increasingly cheap goods.

This comes with a price, though, as it centralises a certain blackmail: the owners of capital get to say that if they don’t get their profit, no-one else will get any benefits. Indeed, this claim has become a central mantra of Tory politicians of late, that social benefits depend on economic growth. In this topsy-turvy ideological world, capitalists are able to project themselves as wealth creators, who simply give out the jobs and benefits on which we all depend.

In the hands of Labour Party right-wingers, this is coupled with the liberal philosopher John Rawls’ notion:

‘That social and economic inequalities should be arranged so that “they are to be of the greatest benefit to the least-advantaged members of society” i.e. an unequal distribution of wealth or other resources can be just when it maximizes the benefit to those who have the lowest allocation of resources – the Maximin theory?’ (tinyurl.com/fjm2yjmd).

So, growth and wealth at the top should be encouraged and help should be targeted at the poorest. Given that without that growth they would have nothing, this allows the argument that letting some people generate huge amounts of personal wealth benefits more than the alternatives.

So Starmer, in his speech promises:

Leaving aside the blithering nonsense about being distinctively British, whatever that means — that’s just branding — financial responsibility means Labour will avoid interfering with property rights, by taxing, borrowing, and using resources within capitalist rules. He even invokes the ‘magic money tree’ to emphasise that they will be responsible, and to distance himself from his predecessor. He emphasises:

‘Modern industrial strategy isn’t about growing the size of the state – it’s about what the state does.’

So, partnership means partnership with, not state direction of, business; targeted support to help businesses grow, grow, grow. Interestingly he uses the term ‘mission-driven partnership’ which is suggestive of the ideas of the economist Mariana Mazzucatto, whose work John McDonnell also referenced as a source for his economic ideas (tinyurl.com/2p8wya5f).

She notes that the state is entrepreneurial, and responsible for a lot of long-term investment in the economy; and advocates mission-based projects, akin to the moon landings, where the state can focus economic activity. This is suggestive that Starmer is triangulating talking to the right, while preparing some more Brownite interventionism, but all of this is ultimately dependent upon the grace and protection of the handful of people who own the economy. Ultimately, his plan for capital is about making the system work the way it does in its own imagination. It’s an ideological fantasy exercise.