Back in 2016 the Australian government entered into a contract with France to supply twelve new submarines to replace its existing fleet. Towards the end of last year, they abandoned this and switched to a new plan to work with the UK and the US in building nuclear-powered subs instead. France was of course not pleased about this, and their foreign minister described it as ‘a stab in the back’.

This is not just an argument about submarines, as there is a new ‘defence’ alliance between Australia, the UK and the US, under the name of AUKUS, which is also likely to cover aircraft and other military technology. It follows from the Defence Trade Cooperation Treaties, also covering the same three countries, signed in 2007, which are intended to make trade in defence articles and ‘services’ more straightforward. These alliances are examples of mini-lateralism, which involves small numbers of countries joining hands and arms in an agreement. These are seen as easier to negotiate than larger multi-lateral agreements, and also more likely to lead to consensus among the participants. 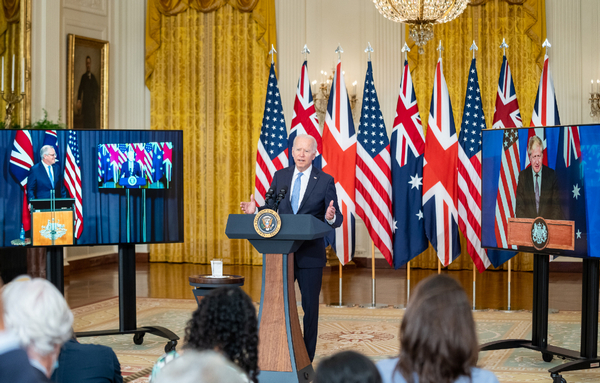 AUKUS is particularly aimed at China, which is seen as having too much power and influence in the Indo-Pacific region. Australia is viewed as a reliable American ally, being the only country that has been involved in every war the US has fought since 1917, including Vietnam. UK industry will benefit, with contracts already having been placed with Rolls-Royce and BAE Systems, though it is not as yet clear where most of the production work would take place. But clearly it will be the US that stands to gain the most, partly just in economic terms, but also as far as global strategy and ‘security’ is concerned.

In July last year, the UK government published a policy paper ‘Global Britain in a Competitive Age’. This focused on a ‘vision for 2030’, in response to, inter alia, ‘geopolitical and geoeconomic shifts, such as China’s increasing international assertiveness and the growing importance of the Indo-Pacific’. Post-Brexit ideas of a role on the world stage for the UK no doubt play a part too, with a return to the ‘east of Suez’ area after several decades. Overall, AUKUS reflects the UK’s ‘tilt to the Indo-Pacific’, as crucial to British capitalism’s economy, security and global ambition.

AUKUS must also be seen in the context of another, less formal, alliance, known as the Quad, which covers the US, Australia, India and Japan. Officially the Quadrilateral Security Dialogue, this was restarted in 2017 after a hiatus, and has included military exercises. There is also the Indo-Pacific Economic Framework for Prosperity (IPEF), established in May this year, with fourteen countries participating (including the US, of course, also Australia, India and Japan, among others). Among its aims is ‘supply chain resilience’, to ensure as far as possible the availability of raw materials and other supplies.

Part of the aim of all this is to control as far as possible the vital seaway of the Malacca Strait, between Malaysian islands and Sumatra. This has for centuries been the main sea route between the Indian and Pacific Oceans, and a large part of world sea-borne goods passes through it, with the extremely busy port of Singapore located there. Oil in particular is a prominent part of this trade, as the strait is part of the shortest route between the Persian Gulf and Asian markets. At its narrowest, the strait is less than two miles wide, so it is a potentially crucial bottleneck.

A spokesperson for the Chinese Foreign Ministry said the agreement’s signatories were adopting an ‘obsolete cold war zero sum mentality’. In reality the Cold War has never gone away, in the sense that capitalist states still go in for alliances and military preparations, and some writers refer to the last couple of decades as the ‘Second Cold War’. AUKUS is just the largest instantiation of this. And as Ukraine and other examples show, there are real on-the-ground wars too. In a world beset by global heating and a pandemic, capitalism has plenty of other priorities.