Bible-belt America may be rejoicing the Supreme Court decision to restrict abortions of ‘unborn children’, but there has always been a noticeable lack of concern expressed for the living children needlessly dying around the world from hunger-related causes. According to UNICEF 40 million children in 15 countries are food insecure and of those 20 million are severely food insecure.

The media’s propaganda has been blaming the invasion of Ukraine by Putin’s Russia for the food shortages.

Is it so? The war in Ukraine is not the root cause of the present food shortages. Even before the Russian invasion of Ukraine, many people around the world were already food insecure.

While humanitarian assistance has been rushed to help Ukrainians, the budget to provide foreign aid to others countries is being reduced. The UN and NGOs are now actually cutting the food rations issued to the hungry. 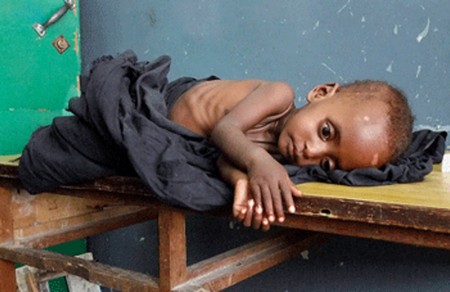 Tens of millions of people across Africa do not receive enough food. Tens of millions are food insecure. Half the population of Somalia, for instance, lack sufficient food. Across the Atlantic, Latin American nations and Brazil also have food-insecure populations in their millions.

International agencies are over-stretched with appeals for funding going unheeded. It means food rations being reduced or eliminated entirely. Three-quarters of all refugees supported by the UN World Food Programme (WFP) in Eastern Africa are now on half-rations. In West Africa, where hunger has reached a record high in a decade, the WFP has significantly reduced rations for refugees living in the Sahel.

Much of the hunger problem is not due to any Russian blockade of Ukraine’s crops but to the effects of global warming and changes in weather patterns leading to increased drought conditions. Somalia is enduring its fourth season of failing rains. It means no harvests, with livestock dying from lack of grass. Many of the armed conflicts blamed on religion are in fact feuds between herders and farmers competing for pasture and water. News outlets feature the atrocities committed by Russia in Ukraine but the almost daily massacres in Africa never attract similar headlines.

According to a May 2022 report by the UN Food and Agriculture Organization, the world enjoys ‘a relatively comfortable supply level’ of cereals. The World Bank noted that global stocks of cereals are at historically high levels and that about three-quarters of Russian and Ukrainian wheat exports had already been delivered before the war started. Ukraine’s 2021/22 harvest yield saw exports up from 41 to over 46 million tonnes.

We are not saying there is no impact from the war but that we should delve deeper into the simplistic superficial explanations offered up by politicians.

So what is causing the global food price inflation? Why are prices sky-high?

Just as it was in the previous food crisis of 2007/8, profiteers have taken advantage of the uncertainty of volatile food supplies to speculate on the world market.

The University of Bonn concluded that ‘we cannot rule out the risk that excessive speculation already contributes to food price volatility and amplified spikes’. Olivier De Schutter, UN Special Rapporteur on Extreme Poverty and Human Rights commented, ‘Speculative activity by powerful institutional investors who are generally unconcerned with agricultural market fundamentals are indeed betting on hunger, and exacerbating it.’

The New York Times reported that ‘in April, speculators were responsible for 72 percent of the buying activity on the Paris wheat market, up from 25 percent before the pandemic,’ hoping to make money out of a self-created shortage. The corporations that control the bulk of the world’s commercial grain trade hold large stocks of grain in reserve so to as benefit when the prices go up.

The reality is that the world produces far more food than we eat. Over 33 percent of the food produced globally is used for animal feed as well as for other non-food uses, mainly ‘green’ biofuels. Over 40 percent of the roughly 400 million tons of corn – 160 million tons – goes to ethanol production. And the USA, despite the food crisis, insists that it has no intention of reducing its ethanol production. The Green Alliance thinktank found that the land use associated with the production of ethanol for consumption in the UK in 2021 was 107,300 hectares. If this land instead grew grain, 3.5 million people could be fed each year. The land used for biofuels for the EU, China, USA and elsewhere would be far greater and feed far more people.

The capitalist food system is built on volatile commodity markets and financial speculation. Hunger is systemic to a financial system that turns necessities into commodities to be traded so that it threatens the well-being of people. It is easier to make Russia the culprit for the current food crisis rather than accept that it is capitalism itself that is culpable.

2023 may well be a critical year if the situation is not addressed by states cooperating together, which is a very doubtful prospect. Therefore, we can expect that: