Proper Gander – Hack To The Future 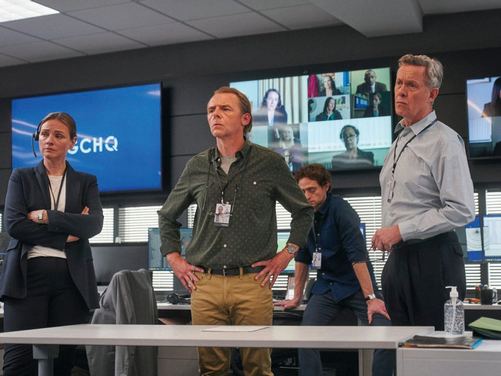 A thread which runs through the work of film-maker Peter Kosminsky is exploring how people relate to ideologies which defend power structures. For example, his 2017 drama The State described the journeys of extremist British Muslims joining ‘Islamic State’ in Syria, while his latest series The Undeclared War (Channel 4) takes a different angle by examining how cyber-warfare is used to drive political agendas.

The drama is a high-tech take on the Cold War thriller genre, set in 2024 when a cyber-war between the UK and Russian governments is escalating. The lead character is Saara, a student on work experience at GCHQ who discovers what her colleagues miss when fighting on the cyber-front against the Russian state’s hackers and opinion-makers. Much of the plot relies on characters staring at rows of code on computer screens, which is livened up by being represented as Saara searching through dreamlike tunnels and rooms. Otherwise, the script goes for verisimilitude, unusually referring to many real organisations, not only GCHQ and its Russian counterpart the Federal Security Service (FSB), but also the BBC, Twitter, BT’s Openreach, Swift and the main political parties.

It’s one of those dramas set in under-lit rooms with tense conversations underlined by sombre music, but it’s convincingly acted, carefully structured and grounded in research into cyber-warfare. The fictionalised activities of GCHQ, the FSB and their associates are based on what’s been reported in the real world, and given some dramatic licence by the near-future setting. While The Undeclared War’s plot is driven by hacks and counter-hacks into the Russian and British state’s infrastructure, along the way we see strategies used by Russia’s authorities which aim to mould people’s views and behaviour. The result is an uneasy reminder that events and how they are reported can be manipulated to suit the narrative of power-hungry states. Ironically, this feeling of doubt about what’s real is mentioned in the drama as part of what the Russian government wants to encourage.

With social media being a conduit for many people’s interpretations of events, it’s also an opportunity to shape perceptions. Two of the drama’s main characters meet when working at the Glavset ‘troll farm’ in Russia, sending at least 80 tweets a day, chipping in to chats about British politics to stir up trouble. These places do exist, and not just in Russia. In 2017, Freedom House (a think tank funded by the US government) found that 30 states worldwide hired people to ‘spread government views, drive particular agendas, and counter government critics’ on social media (tinyurl.com/4tdsevez). As anyone who uses Twitter will recognise, its discussions can be easily derailed by crass or provocative comments of the kind knowingly spread by troll farms.

How television is used to push a particular agenda is shown in the drama through the activities of Russia Global News (RGN), with a studio in London and reporters in the open. This isn’t a real TV channel, and if it were, it wouldn’t be allowed to operate in that way during a cyber-war, given that its closest real-life counterpart, RT UK, had its licence withdrawn by Ofcom following the invasion of Ukraine. One of RGN’s staff makes the fair point that criticisms that it’s a ‘propaganda mouthpiece’ are hypocritical when they come from journalists told what to say by the media corporations which employ them. RGN’s broadcasts aren’t obviously pro-Russian, but convey their message through more devious tactics. Its back-office staff set up two bogus Facebook groups (the lefty ‘Luton For Labour’ and fascist ‘Take Back Control Of Luton’), wait for people to join and then post details of a demo at the same time and place on both groups’ pages. RGN’s reporter and camera crew turn up and record the subsequent violence when far-right numbskulls meet leftist demonstrators. This plot-point has a reportedly actual precedent. In his 2016 documentary Hypernormalisation, Adam Curtis described how pro-Russian state ‘Political Technologists’ sponsored fascist groups, anti-fascist groups and parties opposed to Putin, then let it be known that this had happened so no-one could tell how real those organisations were. As one of RGN’s staff explains, the point isn’t that their news is false, ‘the point is to get people used to the idea that everything’s a lie, that there is no truth. And once they accept that, well, biggest liar wins’.

The Undeclared War is set around a future general election, another target for the Russian state’s FSB. Databases are hacked, distorting exit poll results reported by the BBC and taking people from ethnic minorities likely to vote Labour off the electoral register. RGN reports this as pro-Tory election-rigging, and fakes footage of an ensuing riot in order to spread unrest. These scenes hopefully aren’t based on actual occurrences, although there’s evidence that the Russian state has interfered with US presidential elections and the Brexit referendum, and that the US state has a long history of intervening in other countries’ elections.

Cyber-warfare as described in The Undeclared War is as much about psychology as it is about technology. The script refers to the strategy of ‘reflexive control’: manipulating an enemy’s behaviour, in this case to promote the interests of the Russian state. This approach isn’t new, but it finds new applications as technology develops. In the drama, this is shown as attempts to influence the responses to hacks and to create interpretations through TV broadcasts and social media. The Undeclared War is set in the future, but much of what it depicts is already here.