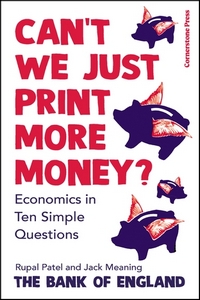 Can’t We Just Print More Money? By Rupal Patel and Jack Meaning. Cornerston Press for the Bank of England. 2022. £14.99.

This is a very readable exposition of economics as taught in schools and universities and should help students pass their exams. However, the authors are likely to regret having used the terms ‘miracle process’ (p. 191) and ‘out of nothing’ (p.171) in relation to banks. This will be pounced on by currency cranks and used to claim the authority of the Bank of England for their mistaken theories.

Even as described by the authors, there is nothing magical about how banks operate. If you define a bank loan as money (as they do), then when a bank makes a loan it will be, by definition, ‘creating money’. But it doesn’t follow that they are doing this ‘out of thin air’ (p. 192). Only the government or its central bank can do that as ‘fiat money’.

When a bank makes a loan it typically opens a bank account in the name of the borrower and credits it with an amount equal to the loan. Before it is spent the money doesn’t have to be covered. But as soon as the borrower begins to spend it the bank will need to have or get money to transfer to the bank account of the person or business the borrower bought from.

Every day, money is flowing into and out of a bank, in as new depositors, payments to existing customers like wages, repayment of loans, etc and out as cash withdrawals, customers paying bills through direct debits or buying things with their debit card and borrowers spending their loan, etc. At the end of the day (literally) what banks owe each is ‘cleared’. If after this a bank finds its payments out exceed its payments in it has to cover this either by borrowing from the money market or running down its reserves at the Bank of England. So, loans when spent do have to be covered in the end one way or another.

When a bank makes a loan it is not creating anything out of thin air. It is transferring money that might not be spent otherwise to others who will spend it. This will have an economic effect by circulating money more but it is not creating money from nothing. Banks are intermediaries whose primary income is derived from borrowing at one or no rate of interest and re-lending it at a higher rate. After paying the costs of running their business (wages, buildings, computer systems) what is left is their profit.

The authors contradict themselves on this point. In chapter 7 they criticise as outdated the view that ‘banks take in deposits from a pool of savings that people want to put away and then they find ways to distribute those savings around the economy. They are simply intermediaries’ (pp 169-70). In the next chapter they say that banks ‘match borrowers to savers. Banks act as middlemen between people who want to save money and people who want money to spend’ (p. 188). They got it right the second time, especially when they add: ‘Banks’ most crucial role is funnelling money to where it can be most productive – and so stimulating the economy, while also making a profit for themselves’ (p.190). But they spoil this by adding ‘they cause more money to circulate in the system’ whereas the correct formulation is that ‘they cause money to circulate more in the system’.

Anyway, why can’t ‘we’ just print more money? The authors’ reply is more or less right.

‘Banks want to be able to make a profit, and that places a limit on how much money they create [how much they lend]’ (p.170).

Banks are in competition with each other both to attract new deposits and to make loans. As a result, as another Bank of England publication explains:

‘…if a bank continued to attract new borrowers and increase lending by reducing mortgage rates, and sought to attract new deposits by increasing the rates it was paying on its customers’ deposits, it might soon find it unprofitable to keep expanding its lending. Competition for loans and deposits, and the desire to make a profit, therefore limit money creation by banks’ (‘Money Creation in the modern economy’).

As to fiat money: ‘If central banks were to continue to print more and more without limit, the result would be too much inflation, with prices rising uncomfortably fast and eroding the value of the newly printed money at too fast a rate’ (p. 257). 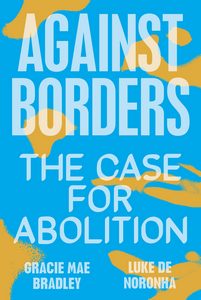 Where at first glance Against Borders… has a single-issue focus, it becomes a multi-faceted explainer of how ‘migrants’ are seen under the terms of capitalism and how we could interact with our fellow humans in a future, more open world.

The book regularly refers to André Gorz’s concept of ‘Non-Reformist Reforms’ (bit.ly/3z1mXui) but gives socialists something to think about in terms of how borders can be abolished and other related issues solved in a future freed from capitalist constraints.

The book is broken down into chapters on race, policing and prisons and counter-terrorism among others but possibly the most thought-provoking is simply entitled ‘Capitalism’. Bradley and De Noronha refer to the ‘myth of race and nation’ and how these and other similar concepts persuade us to perceive a worker from abroad differently from someone who hails from the same locality. There is discussion around how and to what end migrant workers are criminalised and treated by police forces, and the book includes interesting explanations of how ownership of land and ownership of territories differ.

In a 2018 article (bit.ly/2KeGSgM), author, broadcaster and professor Gary Younge described how when his Barbadian mother came to Britain in 1962 to work as a nurse she was already a British subject – ‘My mother didn’t cross the border to come to Britain – the border crossed her.’ In Against Borders… Bradley and De Noronha include a chapter on race and what it means to be a ‘citizen’ including critique of the ‘hostile environment’ (bit.ly/3ALCqju). Why, for example, do we need to be a ‘citizen’ in order to claim basic human rights from a state and how might campaigns for particular groups of migrants be considered to be defeatist by virtue of their reformist nature, rather than attempting to get to the root of the issue.

Ultimately, the book could be judged as a modern revision of concepts around the position and power (or lack thereof) of the worker, both regarding capital and people’s ability to determine their own lives. The authors explicitly and interestingly leave open some questions about how we may restructure after borders are deemed obsolete. There are two thought-provoking utopian ‘interlude’ sections with imagined futures of people on the move and how this could play out in a post-capitalist world.

If Against Borders… is to be a (figurative) call to arms for a new audience to recognise that a radical change is possible in terms of how a state treats people from other (current) nations and possibilities around the building of a new realm, then the message is a positive one.

‘The abolition of borders requires that we challenge all of the social structures underpinning their permanence’ (p149). 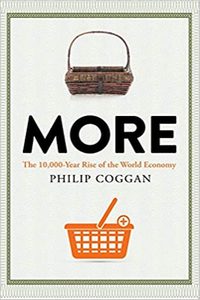 This book contains a great deal of useful factual and statistical material on the development of human society, from hunter–gatherers to the present day, from the origins of agriculture via big increases in productivity to the 2007–08 financial crash. Chapters dealing with chronological periods alternate with those covering specific topics, such as energy and transport. Here we will focus on some of the themes and the main points made.

Coggan is quite open about the role of the state in defending and assisting capitalism. Some level of law and order is needed for businesses to operate, and also the government provides education and various kinds of infrastructure required by capitalism. Britain has never been completely laissez-faire, and more generally the Great Depression of the 1930s led to much greater state involvement in the economy. Many industries have been protected from competition from abroad, and long-term research without short-term payoffs is unlikely to be funded by private companies.

Another theme is the global interconnectedness of production. Cross-border trade involves over half of what the world produces; around ninety percent of this is carried by ship, as can be seen at massive container ports such as Felixstowe and Singapore. Everyday products such as toothpaste contain sizeable numbers of ingredients, which need to be combined in a factory, put in a tube and package and transported to a wholesale warehouse and then to a shop. ‘No man is an economic island.’

Coggan makes no bones about the impact of the slave trade, describing it as ‘the industrialisation of brutality’. He quotes another writer: ‘The African countries that are the poorest today are the ones from which the most slaves were taken.’ More generally, the European conquest of the Americas ‘had a catastrophic impact on the indigenous population’, with perhaps ninety percent of the inhabitants of Mexico being killed, whether by imported diseases or warfare.

In answer to why Karl Marx’s predictions of revolution did not come true by the late nineteenth century, Coggan refers to the benefits of industrialisation being ‘sufficiently apparent’ by then. Marx was indeed over-optimistic, but surveys of workers’ lives in London and York around that time, by Booth and Rowntree, showed that about forty percent could barely keep their heads above water.

The author sometimes puts the word capitalism in quotation marks, on the grounds that it tends to be used in a slippery way, though he does not exemplify this. Yet it does not stop him using communism (without quotation marks) to describe the former system in Russia, which is not slippery, just wrong. And when he writes that ‘If anyone needed a post-Soviet illustration of the failings of Socialist economics, Venezuela was it’, he just shows that he knows nothing about Socialism. He does, however, describe the current system in China as ‘authoritarian capitalism’.

Sadly, the William Morris listed in the index is the owner of a car factory and supporter of Oswald Mosley, not the revolutionary author and designer.

Next article: 50 YA – RD Laing / Thoughts on climate change ⮞