Life and Times – The legal drama 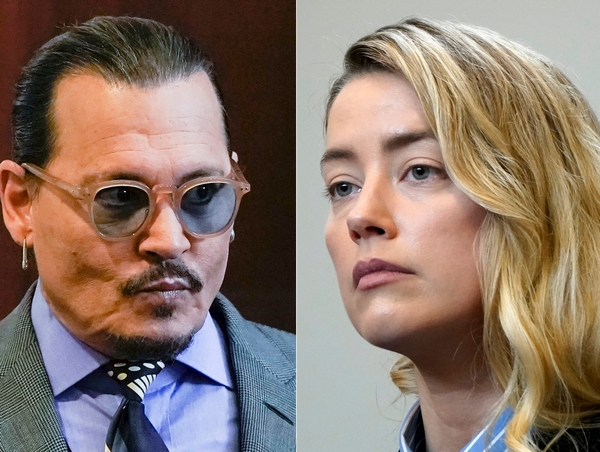 There’s a trendy bar in my area which displays greetings and various other comments on its front hoarding so that they can be read by everyone going past. They sometimes cause a bit of a stir and a recent one certainly did. Large block capital letters said ‘AMBER IS IN DEPP SHIT’. It was a reference of course to the celebrity legal case in the US between Johnny Depp and Amber Heard. Most people will have cast it out of their minds by now, but the reactions it provoked show just how indicative matters like this are of the interests and priorities of many ordinary people in the kind of society we live in.

Nasty
Polls taken at the time suggested that many Americans were more interested in this legal drama than the war in Ukraine or what was being called a potentially historic ruling on abortion expected from the US Supreme Court. Each twist and turn of the trial, televised and livestreamed, was watched by millions of people, and many turned to social media, mainly to express support for Depp and vilify Heard. Heard declared that, apart from intense mockery, she faced hundreds of daily death threats, while on the TikTok platform the hashtag #justiceforjohnnydepp got around 19 billion views.

Locally to me, after the sign in the trendy bar was discussed on my local community Facebook page, the page was flooded with further comments. So many in fact that, after just an hour, the page administrator turned off further comments on the grounds that it was ‘getting nasty’.

In the event, as readers will know, the prediction on the bar sign turned out correct, with Heard ordered to pay Depp some $10M for defamation. As the verdict was announced, screams and chants of ‘Johnny, Johnny, Johnny’ erupted outside the court and Heard announced herself ‘heartbroken’. Yet the verdict was a surprise to many people, given that, in a similar legal process between the same two parties in the UK not long before, the verdict had gone in her favour. In the US court Depp’s legal team was said to have used a common defence tactic in sexual assault and domestic violence cases known as ‘Darvo’, meaning ‘deny, attack, and reverse victim and offender’. This strategy turns the tables on the victim, shifting the conversation away from ‘did the accused commit abuse’ to ‘is the alleged victim believable’. This tactic is said to be often effective in trials involving domestic violence where juries can be persuaded that a female victim is herself guilty. This is said to happen less when the trial is in front of a judge alone, as happened in the UK, rather than with a jury. The judge will apparently better understand the tactic being used and so is less likely to be emotionally affected by the proceedings and more likely to take a sober, objective view of the evidence. Whether or not ‘Darvo’ was used to deliver the wrong verdict, there’s no question that Heard was convicted in the court of public opinion.

Meaningless thrills
What to make of this? A recent book with the subtitle ‘A Manifesto for a Life Beyond Capitalism’ talks about how ‘distraction technologies and the entertainment industry sell us meaningless thrills to patch over the pain’. And this seems an apt characterisation of the spectacle this trail offered to the public. One commentator remarked that the televising of the trial turned it into ‘almost a sports game’. People’s avid immersion in this spectacle does indeed seem reminiscent of the vicarious worshipping of, say, a football team or a tennis player that so many engage in, such worship serving as welcome relief from everyday lives of utter mundanity spent largely in the sale of their energies to an employer. If, in the sport context, the team or the player they support wins, they feel it as a victory for themselves, a form of power uncommon in a life usually experienced as powerless. It’s not hard to see a similar process operating in the act of following a public trial involving celebrities and of supporting one against the other. It provides an interlude of escape from the docility and routine that capitalism, with its worship of paid work, imposes on its subjects.

Alienation
‘This is so intensely gross’ was one of the few comments on that local community Facebook page that this writer was able to empathise with. But at the same time the ‘grossness’ of people’s interest in this event should not be an occasion for condemnation of individuals. It should be seen as a lack of connection by people with the human beings immediately around them produced by the competitive and adversarial nature of the system we all live under. It should also be seen as an expression of the fundamental powerlessness of workers, from which those ‘meaningless thrills’ give some short-lived relief. The alienation from mutual cooperative activity inherent in obsession with celebrities – people they do not know personally and have nothing in common with – is a million miles away from a constructive use of the power and potential we all have to think and create for ourselves and to work usefully and collaboratively with one another.

Of course we do see that power and potential demonstrated in the many communal and collaborative activities that people manage to engage in despite – and in hopeful contrast with – the deadening uniformity the wage and salary system imposes on lives. It is this that will inform human activity in the genuinely democratic society of free access characterised by peaceful cooperation rather than intense competition that we call socialism.