Material World – One World, One People 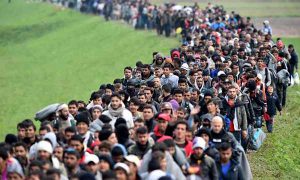 ‘Ubi bene, ibi patria’
‘Where it goes well with me, there is my country’

Millions of vulnerable and damaged people are making perilous, life-threatening journeys to seek a safe refuge.

It was only a matter of a few months ago that some countries were constructing razor-wire fences along their borders to keep out foreigners hoping to reach sanctuary in Europe. Refugees were dying on the frontier from exposure and hypothermia from extreme winter conditions. Many people showed little understanding or support for those asylum seekers and did not want to accept outsiders. Growing xenophobic attitudes have given rise to far-right populism. When the Taliban took control of Afghanistan, Nigel Farage spoke of an impending flood of its refugees: ‘You can now see a wave of people leaving Afghanistan, and we already have numbers we quite simply can’t cope with.’

Now, how different is the reception that desperate and vulnerable men, women and children are now receiving. Europe generously embraces Ukrainian refugees fleeing the Russian invasion. Many humanitarian-minded individuals have rushed to do what they can to help Ukrainians, yet, forgetting or ignoring that refugees from elsewhere are still being pushed back or caged in detention camps.

Socialists share the sentiments of the environmentalist movement, Fridays For Future, when it explained, ‘While Ukrainians deserve immediate peace and all our support, so do the people from Afghanistan, Libya, Syria, Yemen, and all war-torn regions. Empathy, justice, and compassion should be for everyone. Refugees should not have to be white to be heard and seen.’ Fridays for Future went on to say ‘People only desire to live and exist safely. Let it become a door-opening moment where we demand justice for everyone independent of their nationality and skin colour.’

Millions of Ukrainians have joined the 84 million other people in need of security around the world (2021 UNHCR data). If they were all to form their own country, it would be the 17th largest on Earth, slightly bigger than Germany. If we were to add to those figures migrants forced by dire economic conditions to cross borders, the number is well over one billion people.

The population of the forcibly displaced is now more than double the number of Europeans driven from their homes by World War Two, six times the number of those displaced by the 1947 partition of India and Pakistan, 100-fold more than the number of Vietnamese Boat People following the Vietnam War.

To put it another way, about one in every 95 people on this planet is involuntarily on the move. Add in those driven by economic imperatives and one out of every 30 people on Earth is now a refugee or a migrant.

In contrast to media perceptions it has not been the wealthy developed countries hosting refugees. In 2014, about nine million of the world’s displaced lived in low-income countries. Today, that number stands at an estimated 36 million and is forecast, by the Danish Refugee Council, to increase to 40 million by the end of 2023. The displacement crisis ‘disproportionally affects poorer countries and areas that already have enough on their plate,’ said the Council’s Charlotte Slente.

There are currently 5.7 million registered Syrian refugees stranded in Turkey, Lebanon and Jordan, 1.2 million Rohingya in the camps at Cox’s Bazaar in Bangladesh, 2.2 million Afghan refugees still in Iran and Pakistan, 2 million South Sudanese, 4 million displaced in Yemen while Honduras has 937,000 displaced people, the highest number in Central America.

Since 2015, a fifth of Venezuela’s population has left, one of the largest displacements in the world. On average, 2,000 Venezuelans crossed into Colombia every day in 2021 which now hosts 1.8 million Venezuelans.

Behind these numbers are people with personal stories of tragic loss and pain, all hoping for a chance at a better future. They think it is worth risking their lives if it leads to an opportunity of a decent life for them and their families.

However, we also witness a UK government passing draconian new nationality and borders legislation to restrict the rights of refugees and for those who endeavour to enter the country ‘unlawfully’, and they will be criminally prosecuted to add to all the other miseries that have already been inflicted upon them.

The UK government has now announced it intends to deport – or should that be ‘transport’? – those accused of ‘illegally’ arriving to claim asylum to Rwanda, in the middle of Africa, 4,500 miles away. How different from the humanitarian welcome being offered to Ukrainians fleeing war in what is now effectively becoming an unequal two-tier refugee policy.

Socialists do not hold with making a ‘league table’ of suffering and to differentiate between the more deserving or the less deserving for our charity and compassion. There should be no competition or contests for our concern. But in today’s world, such a conflict of interests exists when it comes to attitudes and policies in regard to refugees.

The World Socialist Movement’s position is that we are all equal worthy members of the human family and when it comes to looking after ‘our own’, none should be excluded and rejected, no exceptions nor special cases. Humanity is One. We are indivisible.

3 Replies to “Material World – One World, One People”