Book Reviews – The Truth about Trotsky / Trump and Berlusconi 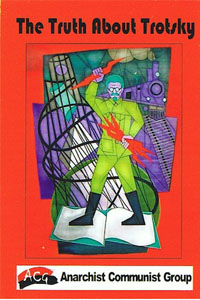 In 1937 Leon Trotsky, from his exile in Central America, wrote an account of the murderous rule of Stalin in Bolshevik Russia. He entitled it The Crimes of Stalin. This new ACG pamphlet also deals with the brutal acts of Bolshevism but those carried out not by Stalin but, ironical as it may seem, by Trotsky. Trotsky’s activities pre-date the coming to monolithic power of Stalin in 1924 but are shown to be hardly less savage and ruthless.

In a series of short chapters the pamphlet analyses in significant detail the actions of Trotsky in ordering and directing the elimination, sometimes on a mass scale, of those he considered in any sense obstacles to the consolidation of Bolshevik power in the period of ‘war communism’ after 1917. Chapter titles such as ‘Trotsky as an Advocate of Concentration Camps’, ‘Shootings for Deserters’, ‘Shooting for Drunkenness’ and ‘Trotsky and Poison Gas’ tell their own tale of cruelty and brutality and in their narrative illustrate the utter and perhaps pathological ruthlessness of Trotsky as commander-in-chief of the Red Army. A prime example is the much-documented mass slaughter of the sailors of Kronstadt in 1921. The sailors, who had been staunch supporters of the revolution in 1917 but were now disgruntled over their worsening living conditions and seen to be challenging the new Russian (state capitalist) state. As the pamphlet puts it: ‘The revolt was drowned in blood, with thousands shot and many sent to the Solovki camps.’ The event is re-examined here and Trotsky’s later excuse that the sailors were ‘counter-revolutionaries’ and not the same ones as in 1917 is dismissed as false. And in earlier episodes we read how ‘the Bolsheviks reacted to the strike at the Putilov plant in Petrograd by shooting 200 workers. Then ‘in Astrakhan, the Bolsheviks fired on an assembly of 10,000 metalworkers, injuring 2,000 of them’ and ‘this was followed by 400 executions by the Cheka, with Trotsky, as War Commissar, sending his approval’.

Yet Trotsky still has many followers on the political left. One book recently talked about his ‘extraordinary vision’ and he is often counterposed to Stalin, who is seen as ‘bad’ for the misdeeds he perpetrated in the name of communism or socialism, while Trotsky, banished by Stalin and then murdered on his orders is seen as ‘good’. Soviet Russia, we are sometimes told, would have had a different trajectory if Trotsky and not Stalin had succeeded Lenin as its leader. Yet nothing we know and which is recapitulated here about Trotsky’s ‘crimes’ suggests that he would have been any less capable than Stalin of tyrannous dictatorial rule over a country far too backward at the time for the development of anything other than centralised state capitalism. So his influence today among many who would consider their ideas about social and political change as being progressive is nothing if not misplaced, both in view of his activities when alive, the theories (such as ‘permanent revolution’) that he left behind and the view he shared with Lenin of the need for a Party to ‘lead’ workers to revolution. In the event he ended up a victim of the system he had been one of the prime architects of, ‘consumed’, as this pamphlet has it ‘by a murderous reaction that he had helped to create’. 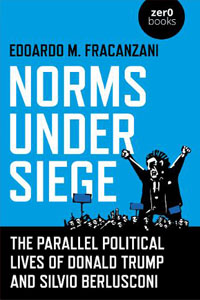 Edoardo M Fracanzani has used his background in studying Italian politics and society to make a comparison between Italy’s and America’s most prominent leaders of recent years. The similarities he finds between the careers and approaches of Silvio Berlusconi and Donald Trump are cogently described in Norms Under Siege, and go much further than them both being slimy right-wing populists.

As Fracanzani explains, the parallels between Berlusconi and Trump began before they entered the political arena. Both started out in the real estate business and later moved into the entertainment industry, with Berlusconi’s empire of television channels and Trump as co-producer and host of The Apprentice. Their business careers were built on ‘a heavy reliance on cronyism, a proclivity to bending (and occasionally breaking) the rules, the adoption of a rather low ethical bar in the pursuit of their objectives’ (p.33), tendencies they continued to employ in their subsequent political careers. These were new vehicles for increasing the power they gained in business, with neither entering politics aiming to improve wider society. Before they became heads of government, each played around with political affiliations which would serve them best at the time. Trump had been a member of several parties, including the Democrats, before settling with the Republicans, while Berlusconi had allies in National Alliance, a party with roots in fascism, as well as Italy’s so-called Socialist Party (Partito Socialista Italiano).

Berlusconi, as head of the Forza Italia (‘Go Italy’) party, was first elected as Prime Minister in 1994, following a period of reform of the electoral system and public dislike of the centrist establishment. His influence over the output of Italy’s TV stations meant that he could win over the support of a large chunk of the populace, in particular those who were anti-left. He was re-elected in 2001 and 2008, and was prevented from running again in 2018 by his conviction for tax evasion. Trump was inaugurated as President of the United States in early 2017, after decades of the Republican Party shifting further to the right on social policies and promoting a stance of tax cuts, which didn’t really translate to reductions in state expenditure. Norms Under Siege was completed before Joe Biden moved into the White House, denying us Fracanzani’s views on Trump’s handling of the pandemic and his presidency’s turbulent end in January 2021.

As Fracanzani convincingly argues, with patiently explained examples, the two leaders used similar approaches to attract public support. Generally, this was among people with lower levels of mainstream education and a higher than average income. He writes that ‘possibly the most important element of Trump’s, as well as Berlusconi’s, extraordinary success with a certain class of voters is a rooted resentment toward the elites’ (p.135). They channelled this resentment into support by somehow giving the impression to many people that they are against the elite, despite them firmly being part of it because of their wealth and power. They are distanced from others in their privileged position, though their personalities (particularly their lack of taste, according to Fracanzani) made them unpopular with their peers, and their loose way of behaving differentiated them from other politicians. Berlusconi has the ‘manners of a TV loud-speaking salesman’ (p.25), which many voters could still relate to more than their usual staid politicians. The resentment towards the elite which Trump and Berlusconi used wasn’t only directed towards leaders but also to a perceived ‘cultural elite’ driving social trends leftwards. As Fracanzani says, ‘no one exploited political correctness fatigue for political gain more than [Trump]’ (p.107). His and Berlusconi’s disregard of ‘political correctness’, or even just basic decency, is exemplified in their sexist attitudes to women, which escalated to sex scandals which failed to derail them. Their behaviour is marked by a lack of shame, which indicates that they aren’t concerned about acting ethically. Despite, or even because of, their transgressions, they maintained a base of supporters whose loyalty is perhaps ‘the most striking aspect of the Trump and Berlusconi phenomena’ (p.124).

Of course, the two leaders had their critics as well. Their stock response to complaints against their behaviour has been to childishly play the victim and portray their accusers as enemies to get revenge on, a trick which apparently works. ‘The most striking similarity between Berlusconi and Trump is the way they were able to shape the public debate in such a way as to escape accountability from their unprecedented, unethical, and illegal behaviour’ (p.175). When challenged through the legal system, they used their position to avoid censure in ways which, according to Fracanzani, have caused ‘institutional damage’: ‘Possibly, the most apparent dents inflicted regard the law enforcement institutions these leaders choose to denigrate in order to bully their way out of criminal investigations’ (p.219).

Norms Under Siege’s account of the parallel careers of Berlusconi and Trump is a catalogue of the rules they have broken. Among these rules, there is a distinction between laws (which are, of course, set in legislation) and norms (social expectations, including ethical values), which is where we find the book’s title (although surprisingly, the word ‘siege’ never appears in its text). For Fracanzani, a combination of laws and norms ‘governs all systems’ (p.142), and because norms are less enforceable, a system which relies too much on them is vulnerable to being misused by any politicians there for their own benefit. So, his stance is based on believing in capitalist tenets like laws and that government is a machine which can be run responsibly, if it has sufficient safeguards against self-serving politicians. But his own opinions aren’t prominent in the book: his clear dislike for Berlusconi and Trump is tempered by his methodical tone, and he prefers to let his detailed analysis of the context in which they rose to their positions speak for itself. His book is a warning about how our political culture and system enable contemptible people like them to get power.