The rules of capitalism 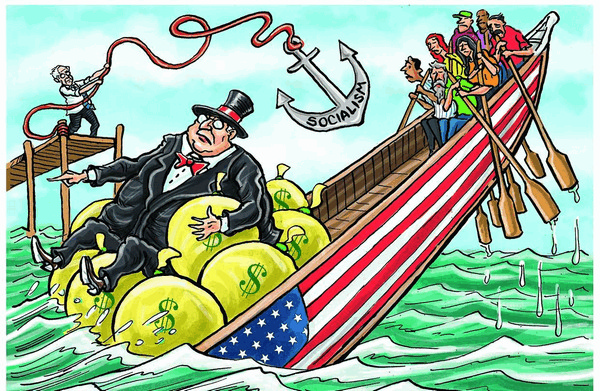 The basic rules of capitalism are quite easy to understand. And so are the consequences of those rules. It really isn’t rocket science. And once you understand what the rules are, you’re then in a position to ask yourself a novel question whether you actually agree with those rules.

Let’s have a look at some of these rules, or facts of life.

Rule number one: very roughly speaking, five percent of the world’s population own 95 percent of the wealth, the land, the resources, the lot. That’s one person in 20. One person has all the wealth and power, 19 have nothing very much at all. That’s called the unequal distribution of wealth. It might sound unfair. It might seem unjust. But it’s a fact of life and it’s legal.

Here’s another rule, a golden rule. The people who have the gold make the rules. That’s why it’s all legal, in case you were wondering about that.

Rule 3 is, the more money you’ve got, the more you can make.

Rule 4 is, the less money you’ve got, the less you can get.

Rule 5 is, the poorer you are, the more expensive everything is.

Rule 6: the poorer you are, the iller you’ll be, the sooner you’ll die, and the worse off your kids will be.

Rule 8: the worse the pay, the harder the job.

Rule 9: the opposite of rule 8, the higher the pay, the easier the job. For example, company directors get paid, say, a hundred times what a warehouse worker gets, but who goes home most exhausted?

Rule 10: if you’re really rich, you’re a capitalist, you don’t need to do any work at all.

Rule 11: the poor pay for every mistake made by the rich.

That’s enough rules. You decide. Have we made these up? Or do they sound like things you’ve thought too?