They told us that 16 February would be the day that Russia was going to invade Ukraine. But diplomatic discussions continued. What had happened? Did Putin really intend to go to war? Or were what appeared to be war preparations merely a means to exert pressure and win concessions from the West? 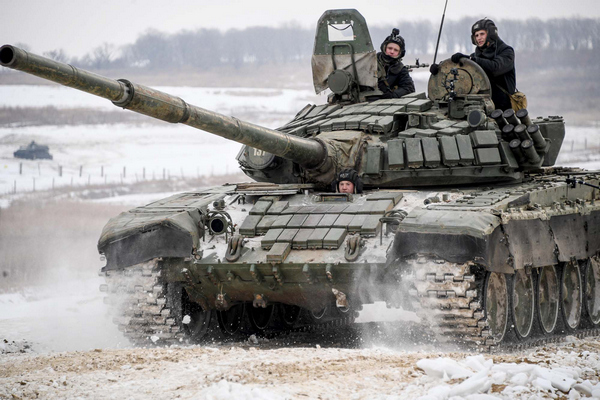 Ukraine has been in the grip of civil war since the coups of 2014 — the Ukrainian-nationalist coup in Kiev and the west and the counter-coup in the east.

The split between western and eastern Ukraine goes back to the 19th century, when Ukraine was divided between the Austro-Hungarian and tsarist empires. Eastern Ukraine, where the country’s industry is concentrated, is mainly Russian-speaking and depends on economic ties with Russia, while western Ukraine is oriented toward Europe. Yanukovych, who was president in 2010—2014, tried to hold Ukraine together by developing closer economic relations with both the EU and Russia, but the EU insisted that he choose – he could not do both. As a representative of the east Ukrainian capital and its Party of Regions, he could not afford to break ties with Russia. This placed him at loggerheads with west Ukrainians, who aspired to join an idealized ‘Europe’, and in 2014 he was overthrown.

The ‘Maidan’– the movement that overthrew Yanukovych – began with peaceful mass protests against corruption, but developed into a violent struggle between riot police and extreme Ukrainian nationalists. The regime that emerged, with the support and guidance of Western politicians and propagandists, was semi-fascist in spirit despite a thin democratic veneer (for a fuller analysis see ‘Ukraine: popular uprising or fascist coup?’ tinyurl.com/mr3m689x).Its hostility to ethnic Russians and citizens of mixed ethnic identity and a massacre of Russian activists in Odessa struck terror in the hearts of easterners, who responded with the ‘anti-Maidan’ – an uprising against the Maidan.

The anti-Maidan also began with peaceful demonstrations and even shared certain themes with the Maidan, such as a concern with corruption. But it too was taken over by militaristic nationalists – Russian nationalists in this case. The process went furthest in the two easternmost provinces, where there emerged breakaway mini-states called the Donetsk People’s Republic and Lugansk People’s Republic, supported and manipulated by the Russian government and Russian nationalist organizations.

The new Ukrainian government conducted an ‘anti-terrorist operation’ to crush the DPR and LPR and reincorporate their territory. The civil war dragged on spasmodically, without decisive results. Two million people fled the war zone and became refugees.

Whole communities in parts of Ukraine resisted the draft, unwilling to sacrifice their sons in a cause of no concern to them. Immunity to nationalist propaganda is especially characteristic of people with mixed ethnic identities, such as Ukrainians long resident in Russia and children of Russian-Ukrainian marriages. Most people in eastern Ukraine see no contradiction in identifying simultaneously as Russian and Ukrainian (in many places they speak a mixture of the two languages called Surzhyk). When interviewed, residents of the war zone are inclined to blame both the Ukrainian and the Russian government.

Russia and its ‘near abroad’

A key security requirement for Soviet leaders was that the USSR be surrounded by a belt of states that were either allies or at least ‘friendly neutrals’ (like post-war Finland). ‘Friendship’ entailed willingness to develop economic and cultural ties, consult regularly with the Kremlin and refrain from offensive propaganda campaigns. Above all, it meant not joining hostile military alliances like NATO.

This attitude was inherited by leaders of post-Soviet Russia, except that now the belt of friendly neighbours had to consist mainly of other post-Soviet states. Due to their shared Soviet and tsarist heritage, these states are felt to be less ‘foreign’ than countries beyond the old borders. The two zones came to be referred to as ‘the near abroad’ and ‘the far abroad’.

It is no longer regarded as essential that all former Soviet republics belong to this ‘friendly neighbourhood’. It is now accepted as a fact of life that the Baltic states are going to remain ‘unfriendly’. However, such tolerance does not extend to the three large inner states of Belarus, Kazakhstan, and Ukraine. Belarus and Kazakhstan remain ‘friendly’ but since 2014 Ukraine has not behaved in a ‘friendly’ manner.

This has an immediate impact on Moscow’s approach to border issues. When the Soviet Union broke up in 1991, the internal administrative borders between its ‘union republics’ suddenly turned into interstate borders, even though they did not closely reflect the pattern of ethnic settlement. The international community nonetheless soon began to treat them as no less inviolable than any other interstate borders.

The Kremlin too accepted these borders, but not unconditionally. Borders with ‘friendly’ neighbours were accepted, however anomalous they might seem, because border issues were not felt to be important enough to justify spoiling good relations by raising them. Thus, Russia has never objected to the inclusion in Kazakhstan of large areas in the north and east with predominantly Russian-speaking populations, and has lent no support to attempts at secession by Russian nationalists in those areas. Nor did the Kremlin contest Russia’s border with Ukraine until 2014, when the overthrow of Yanukovych was quickly followed by the annexation of Crimea, thereby reversing Khrushchev’s transfer of the peninsula from Soviet Russia to Soviet Ukraine. For the Kremlin, the anti-Russian stance of the new government in Kiev also justified support of the secessionist ‘people’s republics’ in eastern Ukraine.

The eastward expansion of NATO, especially when it extends to the ‘near abroad’ and right up to Russia’s borders, is a bitter grievance of Russia’s power elite. That is because it violates the security requirement of a ‘friendly neighbourhood’ deeply embedded in their psyche. It is also because it violates the verbal promises made by Western politicians to Gorbachev that if he allowed Germany to unite and united Germany to remain in NATO then NATO would not expand ‘an inch to the east’. These promises were ‘forgotten’ under pressure from American arms manufacturers, whose sales were flagging due to improved relations with Russia and who sought new markets in Eastern Europe. (For a detailed account see Andrew Cockburn, The Spoils of War: Power, Profit and the American War Machine, Verso 2021, Chapter 6.)

Hence the feeling of Russian leaders that Russia – and they personally — have been deceived, swindled and humiliated. It is surely understandable that there should eventually come a time when as a matter of self-respect they say ‘enough is enough’ and ‘take a firm stand’ in defence of core state interests as they perceive them.

Russia first ‘took a firm stand’ against NATO expansion when it invaded Georgia in 2008, partly in order to prevent Georgia from joining NATO. As Georgia has still not joined NATO, that war – together with Russia’s subsequent recognition of the independence of Abkhazia and South Ossetia — may have achieved its purpose, although Georgia may have remained outside NATO even without Russian intervention. The invasion of Georgia provided a precedent for the confrontation with Ukraine when it adopted the goal of joining NATO.

Thanks in large part to Western arms supplies, Ukrainian forces in the east grew strong enough to make it seem likely that they would succeed in breaking the stalemate and penetrate core areas of the DPR and LPR. Residents of these areas feared what might then happen to them, especially as the forces facing them contained Nazi formations like the Azov Battalion. Russian commentators too envisioned a scenario like the massacre of Moslems at Srebrenica during the Bosnian war, in which case Russia would be morally obliged to intervene.

Russian spokesmen often promised that Russia would not be the first to violate the status quo. However, a major Ukrainian offensive against the DPR and LPR would be regarded as a violation of the status quo and Russia would respond forcefully to any such ‘provocation’. Kiev took the view that it has a perfect right to move against secessionists on its own territory. So each side would be able to blame the other for starting a war.

However, there was no guarantee that hostilities would be confined to eastern Ukraine. The concentration of Russian forces in southern Belarus, close to the border with Ukraine and just 120 kilometres from Kiev, prefigured a possible blitzkrieg to install a ‘friendly’ government.

Many signs appeared in recent weeks of a deep division within Russia’s power elite over the expediency of invading Ukraine. Two senior army officers, one retired from the defence ministry and the other from the General Staff, publicly warned against the prospect of protracted occupation of a hostile population. The main threats to Russia, they declared, are internal ones like corruption and demographic decline. Prominent civilian experts likewise argued – as Andrei Kortunov, director of the Russian International Affairs Council, was quoted on St. Petersburg Online (fontanka.ru) – that ‘any analysis shows that war is to Russia’s disadvantage’.

The prospect of cancelation of Nord Stream, the pipeline through the Baltic Sea to bring Russian natural gas to Germany, is likely to have pulled the huge gas corporation Gazprom into the anti-war camp.

The main advocates of war seem to have been officials of the security services, more concerned with the threat to the regime posed by Colour Revolutions than with broader national interests.

Even the most ‘democratic’ governments, having decided on war, suppress public expression of anti-war opinion. So the fact that it was possible during the recent crisis in Russia openly to oppose any resort to war shows that Putin was not committed to military action. He may have been keeping his options open until the moment when a decision had to be made. (The high level of mobilization of Russian troops could not be sustained for long: they had to be set in motion fairly soon or else demobilized.) Or he may have never intended to go to war at all, resolved in advance to content himself with whatever gains the crisis might yield.

The Ukrainian crisis was accompanied by intensive diplomacy, involving mainly Russia, the United States and major European member states of NATO (Britain, France, Germany). Much of this diplomacy remains secret. But clearly NATO has agreed to take some account of Russian security concerns and revive the stalled process of European arms control. On January 12, after a hiatus of two and a half years, the NATO—Russia Council reconvened in Brussels.

Western governments have affirmed the continuing validity of the NATO—Russia Founding Act of 1997 and the Minsk Protocols of 2014 and 2015.Kiev and its unconditional supporters inside NATO have been lobbying hard to consign these agreements to oblivion, thereby releasing Kiev from such unpleasant obligations as granting a special status to the areas controlled by the People’s Republics.

Russia has obtained no guarantee against Ukraine joining NATO, but it is conceivable that France or Germany, which take pride in maintaining a certain autonomy from the US, secretly promised to block Ukraine’s admission – requiring, as it does, a consensus of existing members.

The Russian parliament (State Duma) is now asking Putin to recognize the breakaway Donetsk and Lugansk People’s Republics as independent states, maybe as a step towards their subsequent annexation to Russia (as happened to Crimea).

Socialists need feel no great temptation to take sides in disputes between Russia and Ukraine. In both countries wealth is concentrated in the hands of wealthy capitalists known as ‘oligarchs’ who own the mass media and control political parties. (One difference is that Russia under Putin, unlike Ukraine, has acquired a state strong enough to limit the rivalry and political power of the oligarchs.) Corruption remains rampant in both countries, despite the best efforts of Maidan and anti-Maidan activists. Human and democratic rights exist on paper, but just try to exercise them and you will find yourself at the mercy of nationalist vigilantes and paranoid security agencies. Fascist groups are actively engaged on both sides. The anti-nationalist Left is weakened by the depth of ethnic and religious divisions and the continued association of ‘socialism’ and ‘communism’ with the Soviet past.

One Reply to “The almost-war in Ukraine”