Proper Gander – Where the wealth went 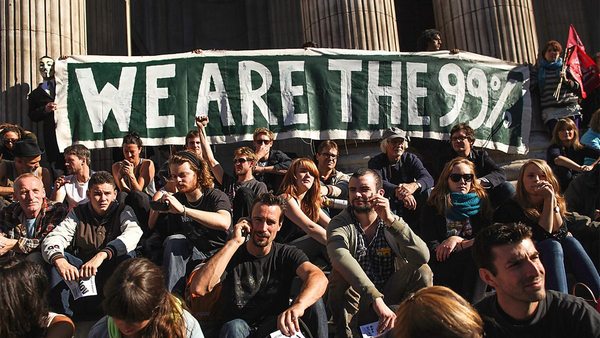 Since the financial crisis and through austerity, Brexit and then the pandemic, we’ve had to get used to the effects of the economy at its most volatile. Reminding us of the depressing years from 2008 onwards is BBC Two’s documentary The Decade The Rich Won, which would more accurately be titled ‘Another Decade The Rich Won’. This two-part programme has an all-star cast of politicians, economists and government advisers who tell us how they navigated the last decade’s fiscal turbulence. Instead of a narrator, captions in block capitals flash up on the screen to pull the story along, accompanied by urgent-sounding ominous music.

The documentary begins with the government’s ‘bailouts’ of hundreds of billions of pounds to banks such as the Royal Bank of Scotland. Without this intervention, we would have faced ‘financial armageddon’, according to then-Governor of the Bank of England Mervyn King, and with this intervention, the wealthiest got even wealthier. It’s explained that this is because the bailout funds stayed with the banks, rather than flowing through and boosting the economy. So, an alternative strategy was tried: quantitative easing. This tactic (credited to King and then-Chancellor of the Exchequer Alistair Darling) is when the Bank of England ‘creates money’ to buy government bonds from financial institutions, which then have more funds to lend out to people and businesses. Between 2009 and November 2020 the impossible-to-visualise amount of £895 billion went through the UK’s quantitative easing plan, with more paid out by other countries’ central banks. The effect of this was an increase in the value of assets, and consequently, according to hedge fund head honcho Paul Marshall, the ‘owners of assets have all made out like bandits’. Marshall isn’t the only city bigshot interviewed for the programme who knows exactly how capitalism works, and in whose interests. Private equity supremo Guy Hands says it’s obvious that wealth attracts more wealth, regardless of what the government recognises. If they and the other economists featured didn’t already know this when quantitative easing was used in 2009, then they would have learned it when the same pattern recurred when the strategy was used after Brexit and again when the pandemic hit.

The super-rich haven’t only benefited from bank bailouts and quantitative easing, but also from shrewd management of their tax affairs. The tax havens where the elite stash their cash were revealed in the Panama and Paradise Papers, leaked to German reporters Bastian Obermayer and Frederik Obermaier. Alongside these revelations, companies such as Vodafone, Amazon and Starbucks were outed as paying little or no tax to the UK government, which at that time was implementing its austerity measures. Then-Prime Minister Theresa May wagged her finger and said to these corporations ‘I’m putting you on warning. This can’t go on any more’, although nothing was done because her reduced-majority government became distracted by Brexit, according to ex-minister and senior aide Gavin Barwell. A more fundamental reason (not given in the documentary) is that governments see high profitability as good for the economy, and therefore are reluctant to impose a heavy tax burden on corporations which would reduce the amount of profit they make.

While the richest grew and held on to their massive amounts of money, millions of people were struggling because of job losses, insecure ‘gig economy’ contracts, rising house prices, shrinking wages and cuts to government funding of services. The widening inequalities of wealth led to the normalisation of food banks and global protests. The programme features some of the campaigners with UK Uncut (a direct-action group targeting corporate tax dodgers) and also the Occupy movement. When asked what the movement achieved, Tina Rothery, one of its members says ‘so much… Occupy pulled the conversation back… to real humans’, although she also admits they didn’t offer solutions beyond this. Another way people reacted to the establishment letting them down was by voting for Britain to leave the European Union. Brexit created more financial instability, responded to with more quantitative easing which again boosted the elite’s coffers.

Some of the interviewees who represent the status quo are more candid than might be expected because they’ve since retired or left their previous careers. For example, Mervyn King (now a life peer) says it’s ‘deeply unfair’ that banks get bailed out when in financial trouble, but other businesses wouldn’t. Ex-Deputy Prime Minister Nick Clegg, who looks like he’s still recovering from his spell in government, tells us there was no debate about further cuts to public spending, as the coalition agreed they would be necessary, despite his talk of ‘difficult decisions’. The Chancellors of the Exchequer (Alistair Darling, George Osborne and Philip Hammond) all seem to be sticking strongest to the decisions made during their tenures. In contrast, Gary Stevenson, a Citibank trader between 2008 and 2014, has shifted his views because of his experiences during those years. As an ‘interest rate trader’, he discovered he could make a fortune by betting on the economy getting worse and as a result became Citibank’s most profitable trader in his area. Realising that economic crises have led to increases in the value of the capitalist class’s stocks and assets, Stevenson felt guilty and left his job. He now works as an economist campaigning against inequality, although the documentary doesn’t mention his proposal to remedy this by placing a time limit on property ownership, thereby forcing the elite to sell their assets, which no government would agree to.

The Decade The Rich Won shows that the way the economy works has enabled the capitalist class to prosper through the turmoil of recent years. The wealth owned by UK billionaires has risen by 310 percent since 2010, little of which has trickled down to those of us scraping by on low incomes. The documentary is worth watching not only because it’s a grim reminder of how capitalism functions but also because it reveals the views of those in prominent positions. Their openness now makes the spin we heard last decade – ‘we’re all in this together’, ‘stronger economy, fairer society’, ‘aspiration nation’, ‘strong and stable leadership’, ‘a country that works for everyone’ – sound even more hollow.