January 2022 saw the release of Oxfam’s report, provocatively entitled Inequality Kills. Produced to ‘inform public debate on development and humanitarian policy issues’, the report focused on three broad areas: 1) The unprecedented rise in billionaire wealth during Covid-19, 2) Economic Violence (the impact of inequalities in health, gender-based violence, climate change and hunger) and 3) Solutions (importance of social movements, and policies around pre-distribution and re-distribution).

Although likely using inflammatory language for dramatic effect, Inequality Kills is comprehensive and includes multiple, detailed and scientifically researched sources of information. Sixty pages and 321 footnotes are accompanied by a summary and a note on methodology describing how the organisation came to their conclusions and how they decided upon what to highlight and what questions should be asked.

Their message is that we are making an unequal world even more unequal and that the pandemic has pushed us into a yet more grave position regarding environmental damage, a decrease in women’s rights, an increase in gender inequalities and more barriers for ‘racialised groups’.

The forewords feature comment from Jayati Ghosh, a development economist and Professor of Economics at the University of Massachusetts at Amherst, USA, but possibly more strikingly, Abigail Disney, a member of the multinational entertainment and media conglomerate family, who is described as a documentary filmmaker [and] activist and lets us know that ‘The answer to these complicated problems is ironically simple: taxes’ and ‘There is more than enough money to solve most of the world’s problems. It’s just being held in the hands of millionaires and billionaires who aren’t paying their fair share.’

As mentioned in the report, Abigail Disney is a member of the ‘Patriotic Millionaires’, an organisation that ‘focus[ses] on three “first” principles: a highly progressive tax system, a liveable minimum wage, and equal political representation for all citizens’ (p 5). Do Oxfam consider that both this organisation and the idea of philanthropy are useful to their position?

In Inequality Kills, a number of statistics are shown in bold, eye-catching infographics, such as the below. 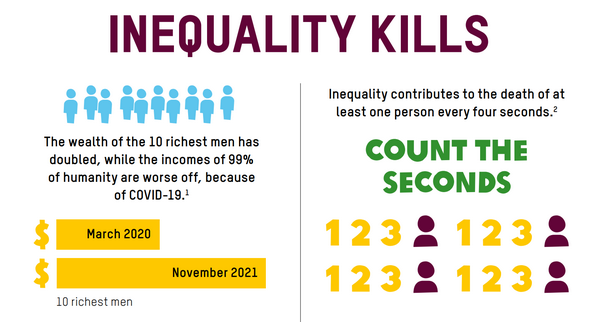 The authors take a stab at the contemporary issue of the single person or business space-race and Jeff Bezos and his somewhat phallic rocket in particular, in a section entitled ‘The Billionaire Variant’ linking the pandemic to the rise in wealth of the richest on the planet.

‘In July 2021, the world’s richest man launched himself and his friends into space in his luxury rocket while millions were dying needlessly below him because they could not access vaccines or afford food. Jeff Bezos’ own iconic Marie Antoinette “let them eat cake” moment will forever be more accurately quoted: “I want to thank every Amazon employee and customer because you guys paid for all of this.” The increase in Bezos’ fortune alone during the pandemic could pay for everyone on earth to be safely vaccinated’ (pp 9-10).

There is scant mention, however, of how or why this situation came to be. How was it possible for a commercial trader, reminiscent of nineteenth century Britain, to increase his wealth in this way? What is the root cause of the problem? Does it take much discussion after reading the report or do we already know the answer? If we know the answer, what are the friends and associates of the wealthy capitalists going to do about it? By design, there are more questions than answers, but how helpful is this methodology?

The report is around 15,000 words long and the word ‘capitalism’ only appears twice, with one of these referring to ‘shareholder capitalism’; the other appearing in a section entitled ‘Economic Violence’:

‘That people in poverty, women and girls, and racialized groups are so often disproportionately killed or harmed, more than those who are rich and privileged, is not an accidental error in today’s dominant form of capitalism, but a core part of it’ (p.12).

The report does not explain what today’s dominant form of capitalism is, so how are we to discuss how to improve or solve it?

A cursory search of various social media platforms show that the report is only mentioned by groups linked to Oxfam itself, with a focus on the amount of billionaires compared to poorer people from an Indian perspective, and by ‘green’ groups and relatively small-reach left-leaning individuals and ‘think tanks’. Features can be found in The Morning Star and Socialist Worker.

It now does not take much searching to find that even the ‘centre-left’ of mainstream politics has woken up to the idea that capitalism is in itself and is the instigator of, damage by design. Foreign Affairs Magazine, published by the US Council on Foreign Relations, was founded essentially as a ‘sister’ of Chatham House in Britain and has close links to the Democratic Party. They state that their ‘goal is to start a conversation about the need for Americans to better understand the world’. Their 2013 article, Capitalism and Inequality, What the Right and the Left Get Wrong describes the problem at hand: ‘Inequality is an inevitable product of capitalist activity, and expanding equality of opportunity only increases it.’

The authors would also have done well to closely read Bambra, Lynch and Smith’s The Unequal Pandemic, published in January 2021, which describes how pandemic-based and other outstanding ‘inequalities are a political choice: with governments effectively choosing who lives and who dies.’ Oxfam’s report may not be able to change this ever-pervasive fact, even if it was their original aim.

So who is the report for really? Are the people that need to discuss the issues raised, going to act on them? Perhaps the most pertinent quote in the report comes from Greta Thunberg, made at the latest pre-COP26 Youth Summit:

‘The climate crisis is of course only a symptom of a much larger crisis. A crisis based on the idea that some people are worth more than others (…]) It is very naïve to believe that we can solve this crisis without confronting the roots of it’ (p.34).