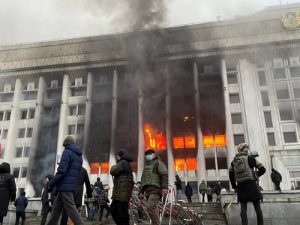 The latest wave of protests began in Janaozen (sometimes spelled Zhanaozen), an oil town in western Kazakhstan. It was here that police shot down unarmed strikers in December 2011. Ten years later, the oilmen again struck for higher wages, better working conditions and the right to organise. The immediate triggers were the layoff in December of 40,000 workers by the main local employer, Tengiz Chevron Oil (75 percent US-owned), followed on New Year’s Day by the doubling of the price of the liquefied natural gas used in vehicles.

On 2 January a protest meeting started in the main square. Next day the strike began to spread. Roads were blockaded. By 4 January all the oilmen of western Kazakhstan were on strike; in the evening they were joined by the coalminers and metalworkers of central Kazakhstan. Non-stop mass meetings were now in progress in some dozen cities. New demands appeared, such as lowering the pension age, but the emphasis remained on ‘bread-and-butter’ issues. 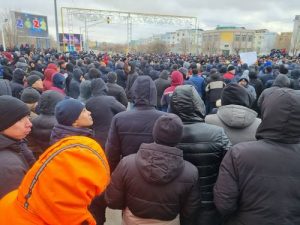 On 5 January mass meetings began in the Russian-speaking cities of northern and eastern Kazakhstan. The protests now encompassed the entire country, with the exception of the capital of Nur-Sultan – previously Akmola and then Astana before being renamed in honor of former president Nursultan Nazarbayev.

The last few days before the crackdown saw a politicisation of the protests. Political as well as economic demands were now raised, including an end to arrests, release of political prisoners, the resignation of President Tokayev, Nazarbayev’s successor, and the final departure of Nazarbayev himself, no longer president but still head of the Security Council of Kazakhstan. Some called for restoration of the Constitution of 1993, which had divided power between president and parliament more equally than later ‘super-presidential’ constitutions. Others demanded a purely parliamentary system with no executive presidency.

It seems that at this time there were also attempts to form committees and councils to coordinate the protest movement, and also a ‘Council of Elders’.

It is worth noting what sorts of demands were not raised. In sharp contrast to the mass protests in Ukraine, there were no demands to change the foreign policy orientation of the country. Nor did any of the demands raised concern ‘ethnic’ issues such as the relative status of the Kazakh and Russian languages (Kazakh is the ‘state language’ but both are ‘official languages’). 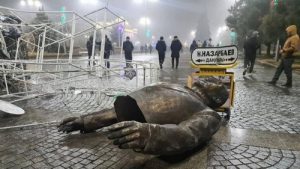 What happened in Almaty?

Although protestors in several cities did topple statues of Nazarbayev or occupy government buildings, protests in most places were peaceful: they did not entail violence against people. However, events in Almaty developed very differently.

Almaty is the biggest city in Kazakhstan. During the Soviet period and the first few years of independence it was the republic’s capital. Even after the capital was moved to Akmola/Astana in 1997, Almaty remained the country’s main commercial, cultural and intellectual centre.

On the night of 4 January, protestors marched to the main square of Almaty, where they managed to push back the police lines and gain the upper hand. Some policemen were seen to flee or even change sides. Stores were looted, bank branches trashed, police cars burned. There were also raids on armouries – a fact that helps explain the emergence of armed insurgents who that night seized control of Almaty International Airport and a number of suburban districts.

The protestors dispersed in the early morning hours of 5 January, but returned about 10am. Over the course of the day, both the city administration building and the police headquarters were stormed and set on fire.

The insurgency in Almaty lasted no longer than 24 hours – from nightfall on 4 January to nightfall on the 5th. It appears that at this time President Tokayev was afraid of losing all control over the situation. He announced a series of concessions: he made the government resign, removed Nazarbayev, lowered the price of gas, and promised to provide assistance to the poorest families. This was also when he appealed for help to other members of the Collective Security Treaty Organization. Russia promised to send troops, as did Belarus and Armenia.

As it turned out, Tokayev was able to defeat the insurgency without the aid of foreign troops. On the night of 5 January, police units regained control of central Almaty, the airport and the suburban districts that the insurgents had seized the night before.

The plane carrying the first ‘peacekeepers’ from Russia landed on 6 January. Their trucks and armoured vehicles trundled around the streets of Almaty. Now and then residents could hear what sounded like gunfire. On 16 January the last Russian troops flew home.

Who were the organisers?

While most strikers and protestors came from the regular workforce, the looters and insurgents in Almaty were ‘marginals’ – resentful young men from the countryside who live in certain suburban districts and are unemployed or occupy poorly paid casual jobs. But armed insurgency – and especially seizure of the airport, 15 kilometres from the city – requires a certain amount of organisation, planning and preparation. So who were the organisers?

Putin and Tokayev point the finger at ‘criminals’ and ‘radical Islamic terrorists’ backed by unidentified forces outside Kazakhstan. While this may help explain disturbances elsewhere in Central Asia, especially in Uzbekistan, it is highly implausible in the case of Kazakhstan. Although most Kazakhs are nominally Moslem, Islam lacks deep roots in Kazakh society and political Islam has very little influence. The purpose of resorting to this bogeyman may be to justify a harsh response to the protests in the eyes of Westerners and Chinese who know little about the people of the region and are influenced by racial stereotypes. This effect is enhanced by blurring the distinction between armed insurgency and peaceful protest and by ignoring the fact that members of all of Kazakhstan’s ethnic groups participated in the protests, including traditionally Christian Slavs.

A Russian colleague who knows Kazakhstan well has a much more plausible explanation in terms of clan politics. Why, he asks, did Nazarbayev move the capital to Akmola in 1997? The official reasons were that Almaty is susceptible to earthquakes and too close to the border with China. He suggests another reason: the danger to Nazarbayev’s position posed by hostile local clans. The recent insurgency may have been organised by the heads of these clans, who are at the same time small or medium businessmen and therefore dispose of the necessary resources.

Be that as it may, the events in Almaty point to the need to investigate possibly significant regional differences in how the uprising developed and whose interests it served.

The leaders of authoritarian post-Soviet regimes in Russia and its close allies live in mortal fear of so-called ‘Colour Revolutions’ of the kind that have overthrown similar regimes in other post-Soviet states. These revolutions, though justified in terms of democracy and human rights, are in fact carried out on the initiative and in the interests of Western powers.

The EU and the US were indeed deeply involved in Ukraine’s Orange Revolution. However, there is hardly any sign of such involvement in the uprising in Kazakhstan.

True, there is a party called Democratic Choice of Kazakhstan (DCK), led by a group of anti-Nazarbayev Kazakh businessmen and former state officials in exile in France. It stands for parliamentary democracy and genuine – as opposed to crony – capitalism. The DCK website (bit.ly/3tzU6Ly) focuses extensively on the gross corruption of Nazarbayev and his relatives (he, his daughter and his son-in-law are all billionaires). Apparently DCK has used social media to encourage and facilitate protest inside Kazakhstan. It is hard to judge its impact. Perhaps its leaders have connections in Western intelligence agencies.

What seems more significant is that Western oil companies with investments in Kazakhstan have been demanding the restoration of ‘order’. Strangely enough, they don’t like strikes and demands for higher wages. The main interest of Western capitalists in Kazakhstan is continued easy access to its vast natural resources. It doesn’t bother them if Kazakh politicians grab a hefty chunk of the proceeds for themselves. What else is new?

As for drawing Kazakhstan fully into the Western sphere of interest, this is not currently viewed as a realistic goal. No one is talking about admitting Kazakhstan to NATO or the EU. For Kazakhstan, as for Central Asia more broadly, there are just two candidates for hegemon – Russia and China.

Gradually but surely, things are returning to normal – or so the Astana Times assures us. The official figure for the number of people killed, probably much too low, is 164. Some 10,000 people have been arrested. Where are they and what will happen to them?

A new government has been appointed. Not quite as new as it might have been, seeing that 11 of the 20 old ministers are back in office and the new prime minister is the first deputy of the old prime minister.

President Tokayev acknowledges that socio-economic problems underlay ‘the tragic events’. Measures must be taken to narrow the gulf between rich and poor. Taxes on the extraction of mineral resource must be increased. At the same time, foreign investors must be reassured so that they do not withdraw their capital (by making them pay higher taxes?). He calls on citizens to ‘get involved in building a new Kazakhstan’. Time will tell how far this reformist rhetoric will go and how long it will last.

Karim Massimov, head of the National Security Committee and a former prime minister, has been arrested ‘on suspicion of treason’. Educated in China, fluent in Chinese and friends with senior Chinese officials, he has promoted economic ties with China and advocated a foreign policy of ‘balancing’ between Russia and China. It is hard not to see ‘the hand of Moscow’ behind this astonishing event. The Russian leadership seem to be exploiting the dependence of the Tokayev regime on Russian support to exclude any Chinese influence from Kazakhstan.

Nazarbayev has disappeared from view. He may be in Switzerland, where his daughter and son-in-law have a $75 million luxury villa.